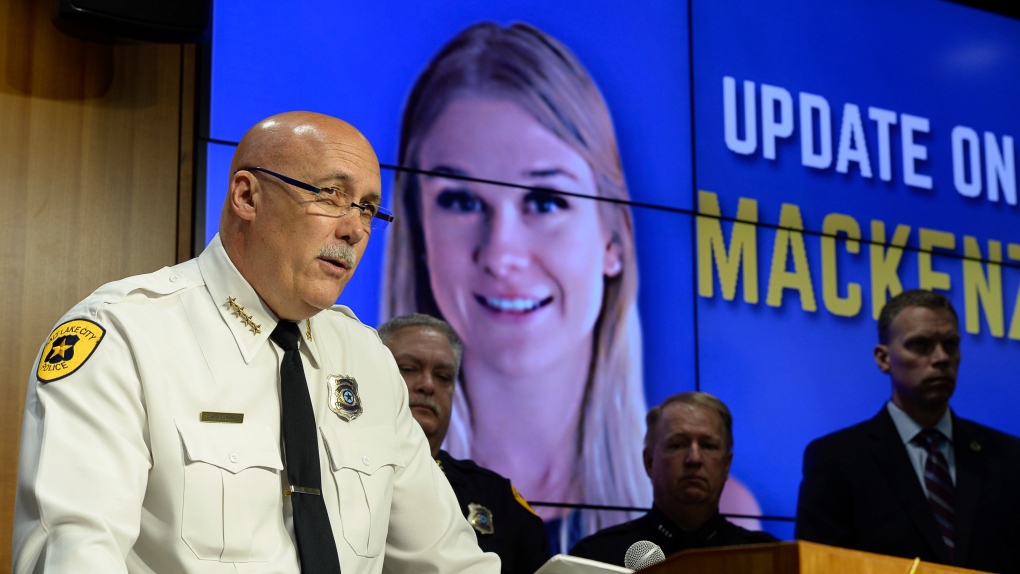 Salt Lake City Police Chief Mike Brown holds a news conference on Friday, June 28, 2019 in Salt Lake City. Brown said Ayoola A. Ajayi was being charged with aggravated murder, kidnapping and desecration of a body in the death of 23-year-old Mackenzie Lueck. He was arrested without incident earlier Friday morning by a SWAT team. (Francisco Kjolseth /The Salt Lake Tribune via AP)

SALT LAKE CITY -- A Utah college student missing 11 days was abducted and killed and her remains burned in the yard of a man now facing aggravated murder and other charges, authorities said Friday.

Salt Lake City Police Chief Mike Brown, who became emotional at times during a morning press conference, said Ayoola A. Ajayi will be charged with aggravated murder, kidnapping, obstruction of justice and desecration of a body in the death of 23-year-old Mackenzie Lueck.

He was arrested without incident Friday morning by a SWAT team.

Ajayi, 31, is an information technology worker who attended college on and off but never earned a degree and was briefly in the Army National Guard but didn't complete basic training.

He doesn't have a criminal record, according to online court information, but a northern Utah police department said he was accused of a rape in 2014. Police investigated but the alleged victim, an adult woman, declined to pursue charges, North Park police said in a news release.

Brown said telling the missing woman's parents in Southern California was "one of the most difficult phone calls I've ever made." Her parents are "devastated and heartbroken by this news."

Lueck disappeared on June 17, after she returned from a trip home for her grandmother's funeral and took a Lyft ride from the airport to a park north of Salt Lake City. She was last seen apparently willingly meeting someone there at about 3 a.m.

Her text conversation with Ajayi was her last communication and phone location data shows them both at the park within a minute of each other, Brown said.

"This was the same time as Mackenzie's phone stopped receiving any further data or location services," he said.

He declined to say whether or how exactly they knew each other. Ajayi has acknowledged texting with Lueck around 6 p.m. on June 16, but denied talking to her later, knowing what she looked like or having seen any online profile for her -- despite having several photos, including a profile picture, Brown said.

The police chief said investigators were seeking to determine if others were involved. A second person was questioned at the time of his arrest and later released, Brown said.

Police have not discussed a motive for the killing, or specified a cause of death. A judge ordered Ajayi held without bail. It was not known if he has an attorney to speak on his behalf. He had not returned previous messages from The Associated Press prior to his arrest.

After discovering that Ajayi was the last person Lueck communicated with, police searched his home on Wednesday and Thursday. Police Thursday described him as a "person of interest."

In his backyard, they said they found a "fresh dig area," and charred items that belonged to Lueck. They also found burned human remains that matched her DNA profile, Brown said.

Ajayi has worked in information technology for several companies including Dell and Goldman Sachs, according to his LinkedIn page. Goldman Sachs confirmed he worked as a contract employee for less than a year at the Salt Lake City office ending in August 2018. Dell said Ajayi had worked there but didn't provide his dates of employment.

Ajayi also appeared to have pursued employment in modeling with a bio page on a website called modelmanagement.com. Court records show he is divorced.

Lueck was a part-time senior at the University of Utah studying kinesiology and pre-nursing, and was expected to graduate in Spring 2020. She had been a student since 2014 and had an off-campus apartment. The university offered counselling services to any students or staffers affected by her death.

She is from El Segundo in the Los Angeles area and flew to California for a funeral before returning to Salt Lake City, police said. Her family reported her missing on June 20 and became more concerned after she missed a planned flight back to Los Angeles last weekend.

Lueck's uncle, who did not provide his name at the police press conference, held back tears as he read a statement from her family thanking the investigators for their work.

"They're also grateful to her community, her friends and others around the nation who have supported this investigation," he said.

She was a bubbly, nurturing person who helped others and took care of animals like guinea pigs, hedgehogs and cats, friends have said. They did not respond to requests for comment after the arrest was announced.

Lueck's sorority, Alpha Chi Omega, said in a statement the group is grieving her loss and hoping the members closest to her can find comfort as they remember her