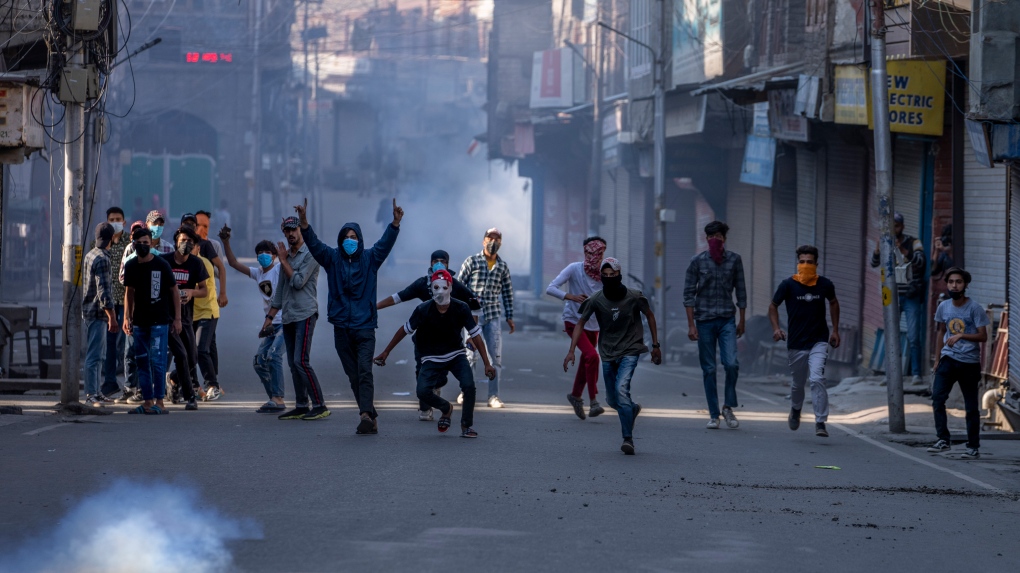 The protest was followed by a clash between dozens of youths and government forces that broke out as an Indian court on Wednesday sentenced Mohammed Yasin Malik to imprisonment for life.

Malik, 56, led the banned Jammu and Kashmir Liberation Front, one of the first armed rebel groups in the Indian-held area, but later shifted to peaceful means in seeking the end of Indian rule. Malik was arrested in 2019 and was convicted last week on charges of committing terrorist acts, illegally raising funds, belonging to a terrorist organization, and criminal conspiracy and sedition.

The youths were arrested for "anti-national sloganeering & stone pelting outside home of Yasin Malik," police wrote in a tweet. They said more people were being identified and would be arrested soon.

Police also tweeted a picture of the arrested youths standing in a row holding their ears with both hands, in an act that is seen as a form of public humiliation and a way of expressing remorse. Dressed in casual wear and sandals, the youths are shown looking at the ground, as two policemen with automatic rifles stand guard.

Making Kashmiri residents hold their earlobes or do sit-ups on the roadside was common in the 1990s, as government forces sought to humiliate people and dissuade them from supporting armed rebels fighting against Indian rule in the Himalayan territory. However, in recent years such practices have largely stopped as a form of punishment.

"The main instigators of this hooliganism will be booked under PSA," the police tweet said, referring to the Public Safety Act, a harsh law that allows officials to imprison anyone for up to two years without trial. "Such anti-national activities & provocative posture will be always dealt strictly & with full force of law."

Muslim-majority Kashmir has been divided between India and Pakistan since British colonialists granted it independence in 1947. Both countries claim the region in its entirety and have fought two wars over its control.

Before Wednesday's sentencing, dozens of Kashmiris gathered at Malik's home in Srinagar, the largest city in Indian-controlled Kashmir. Some marched through the streets, chanting "We want freedom" and "Go back India." Government forces fired tear gas at the marchers, who threw stones. No injuries were immediately reported.

Meanwhile, shops and businesses closed in the main centres of Srinagar for a second day.

Rebels in the Indian-controlled portion of Kashmir have been fighting New Delhi's rule since 1989. Most Muslim Kashmiris support the rebel goal of uniting the territory, either under Pakistani rule or as an independent country.

India insists the Kashmir militancy is Pakistan-sponsored terrorism. Pakistan denies the charge, and most Kashmiris consider it a legitimate freedom struggle. Tens of thousands of civilians, rebels and government forces have been killed in the conflict.

Tanya Ball began her career as a social worker for the Kaska Dene First Nation. Now she runs a land guardian program, working to monitor and protect a vast stretch of the band's northern British Columbia wilderness.