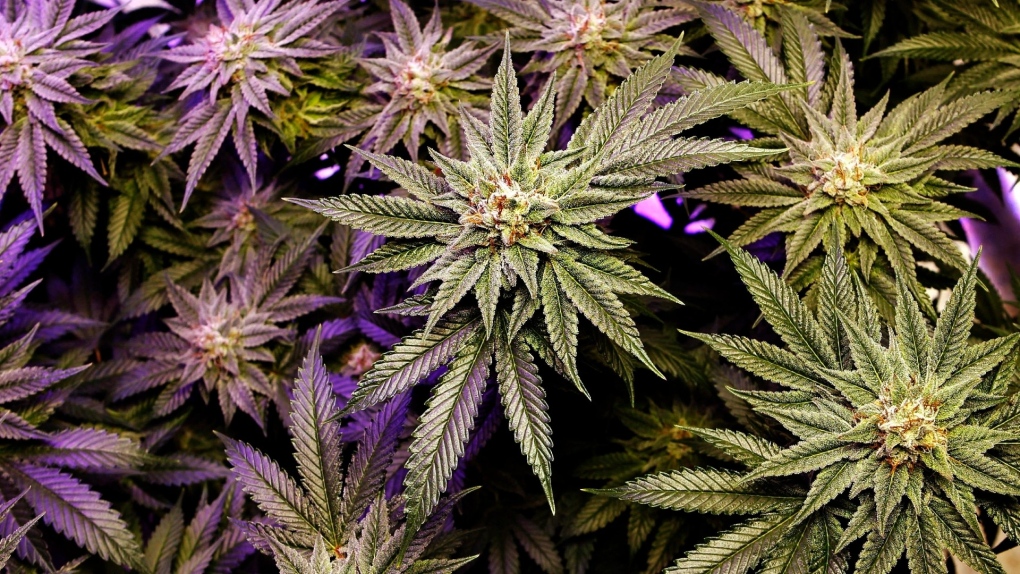 In this Dec. 13, 2017, file photo, a marijuana plant grows under artificial light at an indoor facility in Portland, Maine. (Robert F. Bukaty / AP)

Two other law enforcement officers and a prosecutor aided the operation by providing intelligence and tipping off participants, prosecutors said.

Federal documents unsealed Wednesday when one of the defendants pleaded guilty revealed an elaborate program in which marijuana that was grown in western Maine for registered caregivers was sold outside the program, with profits being laundered through a corporate structure.

The president of the Maine Chiefs of Police Association said the alleged involvement of officers was "very upsetting."

"The Maine Chiefs of Police Association has always stood for equal application of the laws to everyone in the state of Maine and we are confident in the next phase of the judicial system to adjudicate this case accordingly," said Augusta Police Chief Jared Mills.

Randal Cousineau, 69, of Farmington, Maine, pleaded guilty Wednesday to conspiracy to illegally cultivate and sell more than a ton of marijuana and more than 1,000 marijuana plants, according to the documents.

While Cousineau had a 50% stake in the business, the leader of the operation was allegedly Lucas Sirois, 41, of Farmington, prosecutors said.

Sirois, who made his initial court appearance Thursday in Bangor, Maine, worked with his tax preparer to file false income tax returns to hide hundreds of thousands of dollars in income, prosecutors said.

Timothy Parlatore, attorney for Sirois, said his client was engaged in a legal marijuana business and "took great steps to ensure that he was acting in accordance with Maine law." The federal charges were based on "the words of a disgruntled former employee," he said.

Parlatore said he'll seek to stop the prosecution based on the conflict between state and federal law. Maine has long had a medical marijuana program, and the sale of recreational marijuana began last fall. But marijuana continues to be illegal under federal law.

"What he's doing is legal under state law. This is not something the feds should be involving themselves with," he said.

The attorney for Sirois' estranged wife, Alisa Sirois, who is charged with conspiracy and bank fraud, said federal law has failed to keep pace with changing times.

"This case cries out for a less antiquated approach to drug enforcement," said attorney Ronald Bourget. "The 'war on drugs' may still be ongoing, but the white flag on marijuana was raised years ago."

As part of the scheme, a Rangeley select board member was paid tens of thousands of dollars to advance a marijuana ordinance that Sirois himself had drafted to a town referendum, prosecutors said.

Walt McKee, an attorney who represents Franklin County Assistant District Attorney Kayla Alves, said she is innocent and that it was "disappointing to see her dragged into all of this." And an attorney for the accountant denied the allegations, as well.

Attorneys for the other defendants didn't immediately respond to an emailed request for comment.