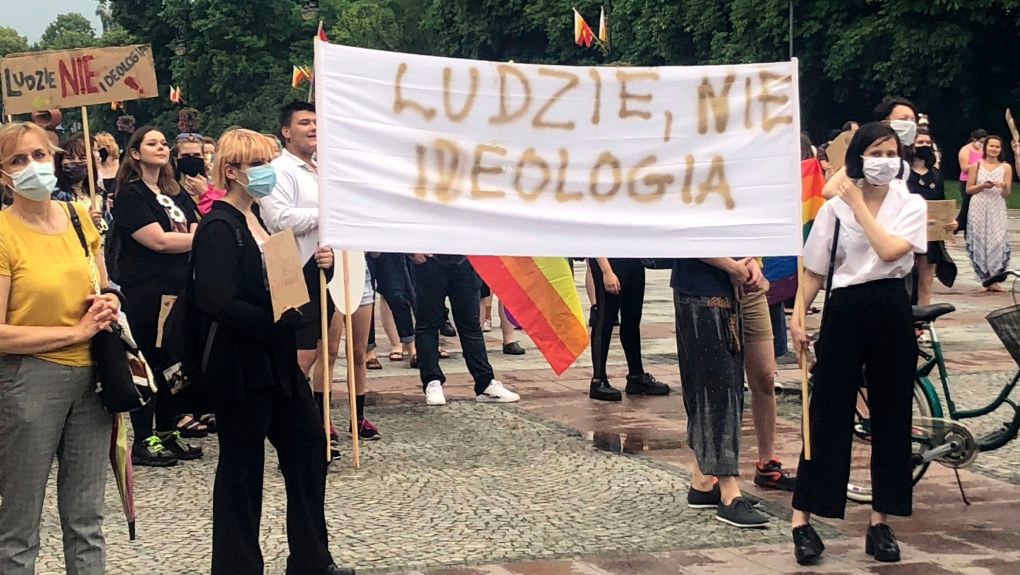 Protesters hold a sign saying "People, not Ideology," at a protest of the homophobic rhetoric of Polish President Andrzej Duda in Bialystok, Poland, on June 20, 2020. (AP Photo/Vanessa Gera)

WARSAW, POLAND -- Members of Poland's LGBT community say they are angry and afraid after President Andrzej Duda won re-election in a divisive campaign that cast their movement for equal rights as a dangerous "ideology" that threatens families in the deeply Roman Catholic country.

Some activists say the homophobic rhetoric that emerged echoes policies in Russia under President Vladimir Putin, who signed a law in 2013 banning gay "propaganda" and where the constitution now bans same-sex marriage.

They worry that Polish authorities are moving the country in that direction, and some already have left, fearing further discrimination. Others are vowing to stay and fight even harder for LGBT rights.

"There's always a price for this kind of narrative, and it's not the politicians who are paying the price. It is us," said Hubert Sobecki, head of Love Does Not Exclude, a Warsaw-based LGBT rights group. He said some have been driven to suicide, including students who were bullied at school.

"It's been going on for years," he said in an interview Tuesday from an LGBT-friendly cafe in Warsaw where "We are with you" was written in chalk on the pavement outside, along with a heart filled in with colours of the rainbow.

"It's a disaster. You can call it a humanitarian disaster, but that wouldn't even bring you close to the scope of human suffering those people are inflicting on us as a community," Sobecki said. "They call us `ideology,' but it's not the ideology that is beaten up on the street."

As the race tightened in its final weeks, Duda seized on LGBT rights to shore up support among conservatives. He signed a "Family Charter" that pledged to "ban the propagation of LGBT ideology in public institutions." He formally proposed a constitutional amendment to ban adoptions by same-sex couples.

Duda's campaign also tapped into anti-Semitism and xenophobia, but he reserved his harshest rhetoric for the LGBT rights movement, calling it more dangerous than communism -- an attack that resonated with millions of Poles who suffered under decades of political repression across eastern Europe.

And in a comment that was denounced as the most dehumanizing of all, the president said: "LGBT is not people, it's an ideology."

That triggered demonstrations in which protesters carried banners stating that they were people, not an ideology. The message also spread on social media.

"To me, it was so humiliating. Like in 2020, I have to say I am human? It's horrible," said Mariusz Kurc, the editor of Poland's only LGBT magazine, Replika.

He said he also felt anger "at the ignorance of people, at indifference -- a big disappointment that we didn't use the chance that we got."

Acceptance of LGBT rights had been growing since Poland joined the European Union in 2004, with more people coming out and more pride parades each year, even in small towns.

But the mood had changed dramatically in recent years under the ruling Law and Justice party, which has cast LGBT rights as a foreign import that threatens Poland's national identity.

The backlash intensified last year following a declaration that Trzaskowski signed which promised help for LGBT youths in Warsaw who were rejected by their families. It called for sex education in schools in line with World Health Organization guidelines, rather than church teaching.

The backlash included many local governments, particularly in the conservative southeastern areas of Poland, which declared themselves to be "free of LGBT ideology." It was a mostly symbolic gesture but it was one that left many in the LGBT community feeling unwanted and unsafe, particularly in small towns where they already felt more vulnerable.

One-third of all people in the nation of 38 million now live in these self-declared "LGBT-free zones."

This week, however, courts annulled such declarations in two towns, arguing that they violated a constitutional ban on discrimination. At least one community is also seeking to reverse its LGBT-free declaration following threats from the European Union to cut off money to places that approved anti-LGBT resolutions.

"I am disappointed, sad, angry," said Romana Dybalska, 37, who is raising three children with her longtime partner, after Duda's victory.

"I really don't know what he meant when he talked about LGBT ideology. LGBT means people who are fighting for equal rights," she said from her home in Warsaw. "I want to have the same rights as my sister has who lives with her husband."

"I believe that good times will still come to Poland," Dybalska said. "But at this point I am considering leaving this country."