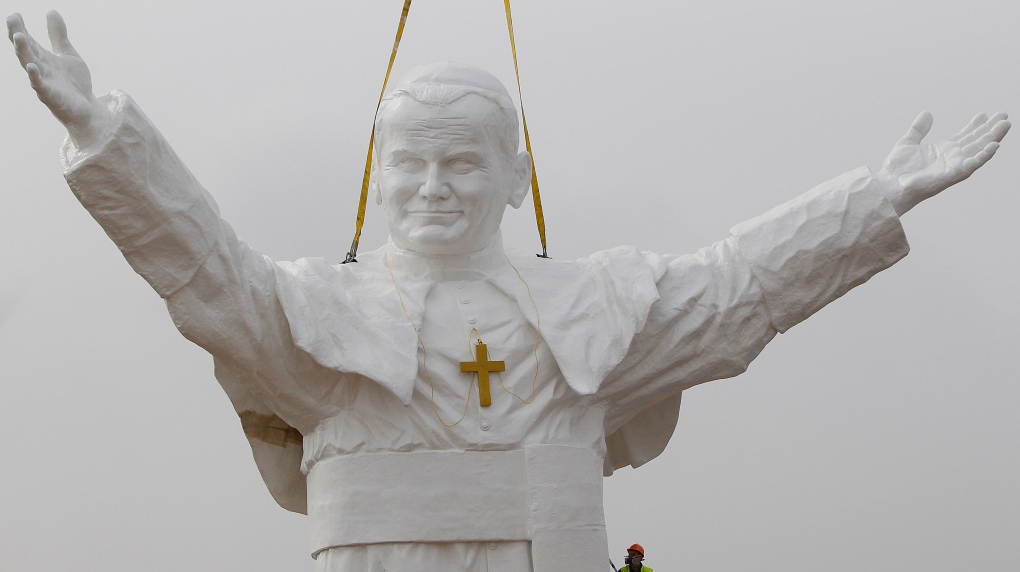 A worker adds finishing touches to a giant statue of the late Pope John Paul II being readied for unveiling this weekend, in Czestochowa, Poland, Tuesday, April 9, 2013. (AP / Czarek Sokolowski)

CZESTOCHOWA, Poland -- Workers were putting the finishing touches Tuesday on what its backer says is the world's tallest statue of the late Pope John Paul II.

The 13.8-metre white fiberglass figure will tower over the southern Polish city of Czestochowa, home to the predominantly Catholic country's most important pilgrimage site, the Jasna Gora monastery.

Funded by a private investor and put up on private grounds, the Polish-born pontiff appears smiling and stretching his arms to the world. On Tuesday, workers were joining the pieces together and painting them before the official unveiling of the statue Saturday.

Leszek Lyson, who is funding the project, called the pope "a great and good man who has done a lot for the world: ended communism and opened borders in Europe, reached to people in his pilgrimages around the world. His statue "should make everyone stop and think about life."

Its construction comes as the traditionally respected church comes under criticism for its conservative views and as church attendance shrinks.

Born Karol Wojtyla in Wadowice, southern Poland, John Paul was elected in 1978, a surprise choice from communist eastern Europe. In Poland he is credited with inspiring the Solidarity movement that helped end communism in 1989. His death in 2005 was a time of national mourning.

Lyson said that the unveiling ceremony will mark three years since he saved his son from drowning and is a sign of thanks.

He is also trying to get the statue into Guinness Book of Records as the world's tallest of John Paul.

Poland already boasts that it has the world's tallest statue of Jesus, unveiled in 2010 in the western town of Swiebodzin.