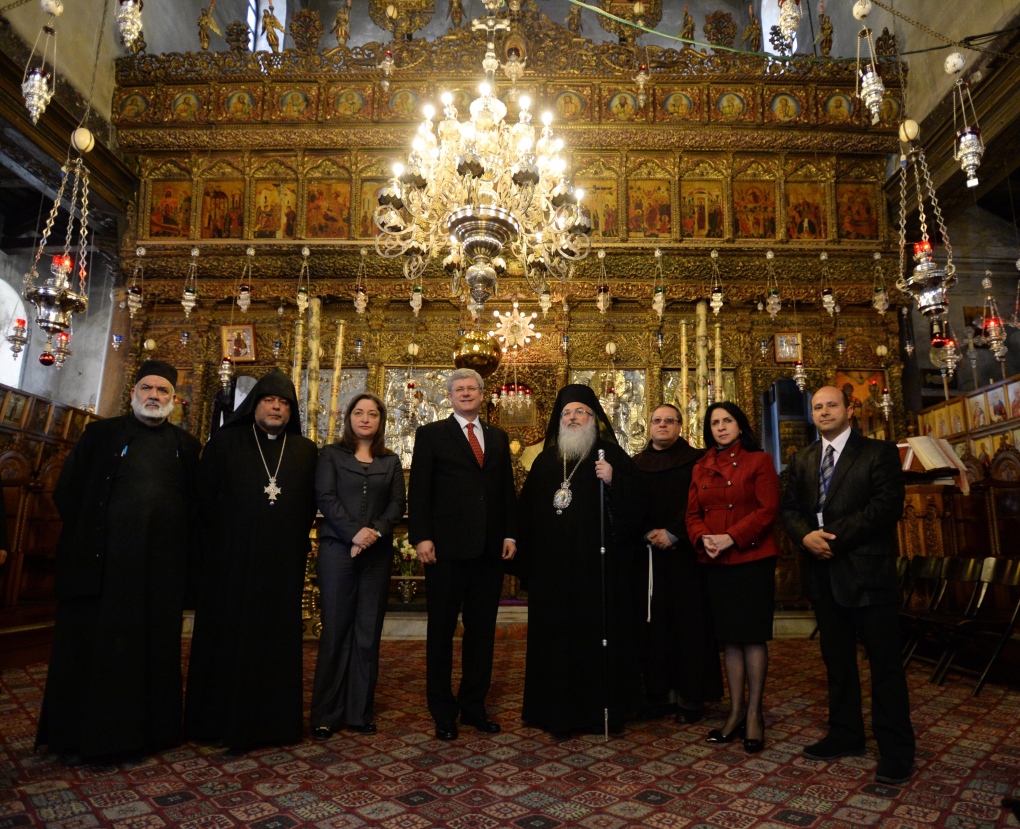 Prime Minister Stephen Harper visits the Church of Nativity during a visit to the West Bank City of Bethlehem on Monday, January 20, 2014. (Sean Kilpatrick / THE CANADIAN PRESS)

BETHLEHEM -- At the site of what many believe is the birthplace of Christ, it was a decidedly unholy episode -- Palestinian news crews, incensed and not shy about expressing it when Prime Minister Stephen Harper's videographer entered the Church of Nativity ahead of them.

Harper was visiting the Bethlehem church when the melee erupted on a sunny Middle East morning. The videographer trailing his every move during his inaugural visit to the region was hustled into the Church of Nativity right behind Harper as his advance team asked media to hang back until the prime minister was settled inside the sacred structure.

Palestinian news crews, however, grew irate, believing the videographer was a Canadian news reporter who was getting preferential treatment. No amount of reassurances could calm down one cameraman, in particular, as Harper's beleaguered advance man finally threw up his hands and allowed the media into the ancient church.

"You wouldn't do this in Israel!" the cameraman shouted before he was allowed inside.

Outside the church after Harper's visit, a Canadian cameraman told the Palestinians not to feel badly. Canuck media, too, he said, are routinely kept far away from the prime minister.

Nonetheless within the hour, the Palestinian Center for Development and Media Freedoms released a statement condemning what it called an "attack" on TV cameraman Amer Hijazi.

The group cited another journalist, Mousa Al Shaer, who alleged that the incident took place once they were allowed inside the church. A bodyguard punched Hijazi "by a metal piece on his fist to Hijazi's chest."

The pool reporter for The Canadian Press, in the middle of the fracas, witnessed no assault.

The Prime Minister's Office wouldn't comment, referring the matter to the RCMP, the employer of the prime minister's bodyguards.