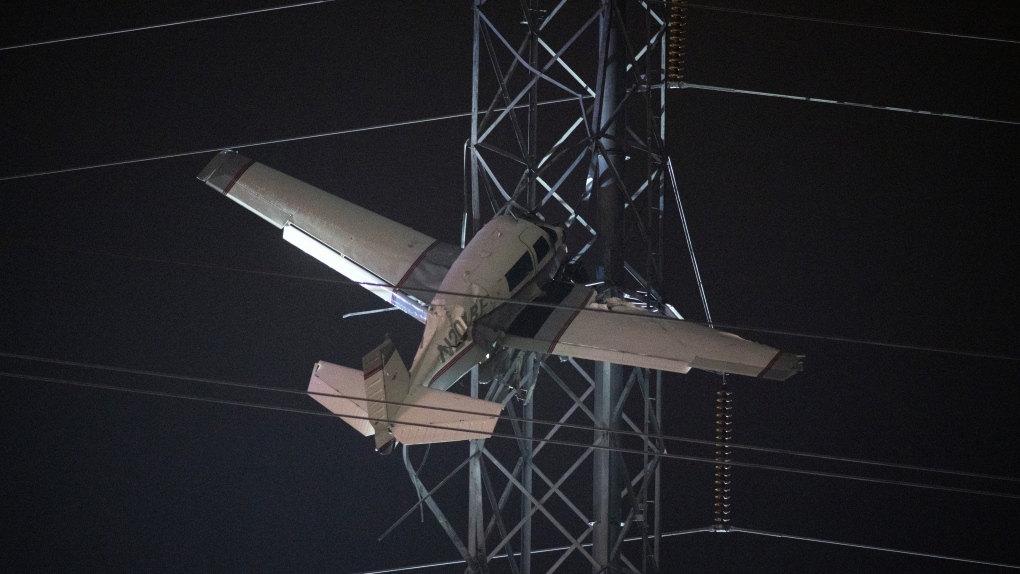 Montgomery County Fire Chief Scott Goldstein said the plane got stuck in the lines about 100 feet (30 meters) above the ground at around 5:40 p.m. Sunday. Responders secured it to the tower at 12:16 a.m. Monday, and the first occupant was removed from the plane at 12:25 a.m. The second occupant was out at 12:36 a.m.

Maryland State Police identified them as pilot Patrick Merkle, 65, of Washington, D.C., and passenger Janet Williams, 66, of Marrero, Louisiana. Both suffered serious but non-life-threatening injuries and that hypothermia had set in while they waited to be pulled from the plane, Goldstein said.

The single-engine Mooney M20J hMad departed White Plains, New York, and crashed into a power line tower near Montgomery County Airpark in Gaithersburg, the Federal Aviation Administration said in a statement. The FAA, National Transportation Safety Board and Maryland State Police are investigating.

Utility contractors had to disconnect the high-tension wires to make it safe for rescuers to stabilize the plane.

The utility Pepco had reported that about 120,000 customers were without power in Montgomery County, but most of them, outside of the crash site, had their electricity restored before the people were pulled from the plane.

The Montgomery County Public School system tweeted late Sunday night that its schools and offices would be closed Monday due to the outage's impact on safety and school operations.

Goldstein said it could take days to remove the plane and reconnect the power lines.

A Portuguese dog named Bobi has been named the world’s oldest living dog by Guinness World Records, which claims the pooch is also the oldest canine ever recorded.

A group of airlines is asking the Supreme Court of Canada to hear their case after a lower court largely upheld the validity of Canada's air passenger bill of rights.

A letter of support signed by 30 prominent Quebecers, including academics, activists, and community leaders, is asking that Amira Elghawaby be given the chance to fulfil her mandate as Canada's first special representative on combating Islamophobia.