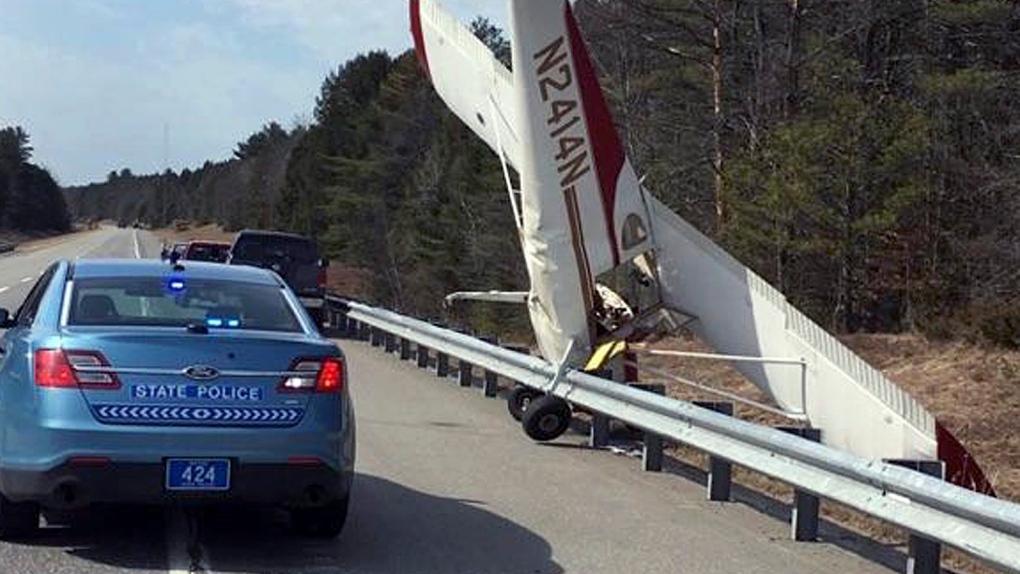 In this photo released by Maine State Police, a plane stands on its nose after striking a guardrail after it landed Tuesday, April 11, 2017, in the southbound lane of Interstate 295 in Bowdoinham, Maine. (Maine State Police via AP)

BOWDOINHAM, Maine -- A small plane made an emergency landing against traffic on an interstate Tuesday, struck a guardrail and came to rest nose-down, police said. One vehicle had to serve to avoid the plane, but no motorists were injured, and the two people aboard the plane suffered only minor injuries.

The plane, piloted by John Gayley, of Bowdoin, landed in the southbound lane of Interstate 295 in Bowdoinham at about 10:15 a.m. It then crashed into a guardrail off the breakdown lane.

The plane, a 1947 Cessna, did not hit any cars during its landing. Police said one vehicle had to swerve to avoid the plane as it landed against traffic.

Police said Gayley told troopers he had taken off from a Bowdoinham airfield, and his engine stalled when he attempted to switch fuel tanks. His original plan was to fly to an airfield in Turner.

The Federal Aviation Administration was notified about the crash. A wrecker planned to remove the plane from the road later Tuesday.