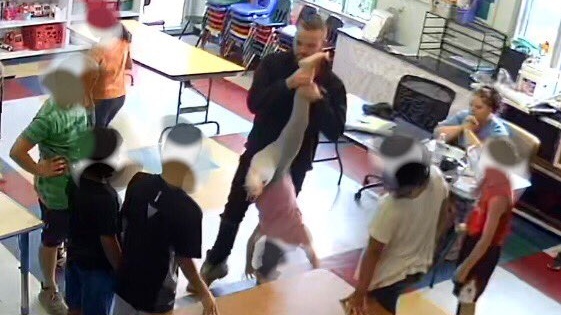 A troubling video screenshot shows a daycare worker appearing to dangle a five-year old girl by the ankle, Ohio police allege. They released the photo to show 'the severity of what little girl endured.' (Columbus Ohio Police/ Twitter)

Ohio police have released a troubling picture of a daycare worker appearing to dangle a five-year old girl by the ankle to show “the severity of what the little girl endured.”

Two employees at the Worthington Learning Centre in Columbus, Ohio have been arrested in connection to the incident. Police are also investigating other allegations that the staff did nothing to stop the same girl to be bullied.

In one tweet on Tuesday, Columbus police describe video of the victim enduring “extreme bullying by students” while two staff members “sat and watched.”

Police allege that in the video, one of Dietrich’s students brings the child into her room and older students begin to pull, drag and swing the child around. This was all in view of both Dietrich and Tennant, who was also in the room.

The five-year-old “appears frightened and keeps her eyes closed or covered and attempts to curl up into a fetal position,” police said, adding she tries to get away but one of the students grabs her and holds her down.

Columbus police say both daycare employees “watch the ‘bullying’ actions of the other students” and “do not attempt to stop the ‘bullying.’”

Police allege that Tennant then picks the five-year-old girl up by her right ankle -- and eventually her left leg -- carrying her upside down before placing her on the ground.

In a second tweet that shows a screenshot of the video, police wrote that, “while we are protecting the identity of the 5-year-old victim, we want to share with you the severity of what little girl endured in a learning centre.”

“This case remains an ongoing investigation," police say in regard to the release of the photo. WBNS reported that the employees have since been fired.

This case remains an ongoing investigation. While we are protecting the identity of the 5yo victim we want to share with you the severity of what little girl endured in a learning center. Actions by educators who are now facing criminal charges. https://t.co/GMf7cHAKbh pic.twitter.com/UgsbAwgY0t