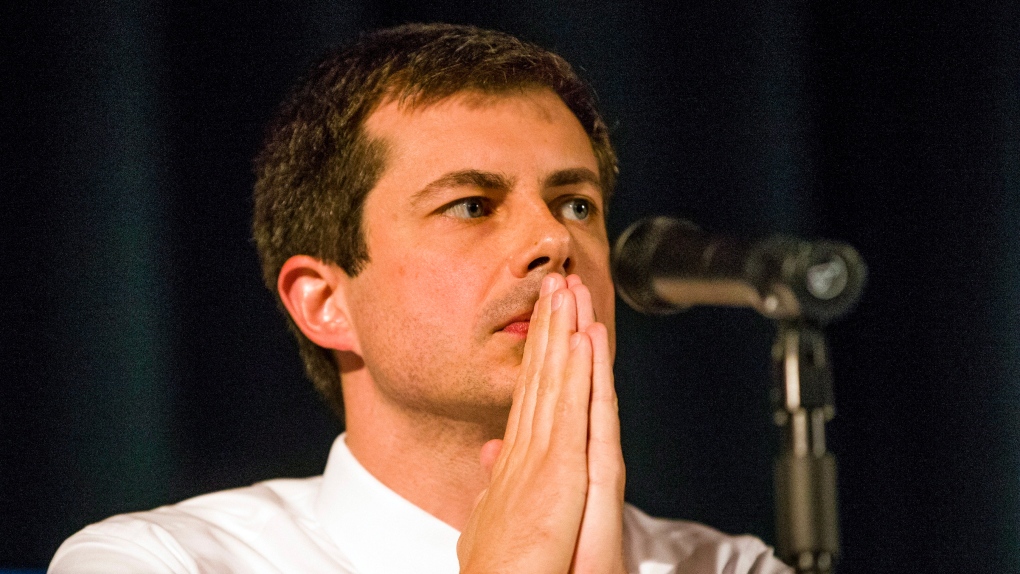 Pete Buttigieg has been the early darling of the 2020 Democratic presidential contest, rising in the polls with a media omnipresence that's highlighted his intellect, steady demeanour and vision for a new generation of political leadership.

But in recent days the idea of Mayor Pete, a 37-year-old wunderkind some say is the antidote to President Donald Trump, has met the reality of Mayor Pete Buttigieg, the leader of a segregated city, a police force that's overwhelmingly white and a community where decades of racial tensions reignited after last week's fatal shooting of a black man by a white officer.

That reality is crystalizing at a difficult moment as Buttigieg prepares to step onto the biggest stage of his career to debate nine of his rivals Thursday. He'll undoubtedly be confronted by the shooting in South Bend, Indiana, and the issues that led up to it. Buttigieg will be going up against two front-runners, former Vice-President Joe Biden and Vermont Sen. Bernie Sanders, who have more experience in public office than Buttigieg has years on earth, as well as fellow contender California Sen. Kamala Harris, a black former prosecutor who's made addressing inequality a central theme of her campaign.

The situation is especially urgent for Buttigieg, who needs to attract more support from black voters whose backing is critical to winning as a Democrat. And it gets at a central question about Buttigieg's campaign -- whether he has the experience to be president, said Alvin Tillery, a political science professor who directs Northwestern University's Center for the Study of Diversity and Democracy and who lived in South Bend from 2000 to 2006.

"I think it's very, very fair stakes for anyone who's thinking about Pete Buttigieg to ask him: 'OK, African Americans are the heart and soul of the Democratic Party's electorate in primaries and also on election days. What have you actually done to change the policing of your economically marginal African American community? What have you actually done to reduce racial disparities and inequalities in South Bend, Indiana?"' said Tillery, who is black.

Buttigieg, a Rhodes scholar and Afghanistan War veteran, left the campaign trail June 16 after Sgt. Ryan O'Neill killed 54-year-old Eric Logan, who O'Neill said was armed with a knife and refused orders to drop it. O'Neill was responding to a call about someone breaking into vehicles in an apartment building parking lot when he confronted Logan. His body-worn camera -- provided to officers last year in an attempt to improve transparency between the department and community -- wasn't turned on.

The mayor cancelled high-dollar fundraisers in California and New York to be in South Bend, where he held news conferences and met with community members and clergy and marched alongside residents -- black and white -- last Friday night. He travelled to South Carolina to address the state party convention Saturday but returned home for a Sunday town hall that was at times contentious , with residents shouting that he was too worried about campaigning for president to deal with local problems.

Buttigieg sat behind a desk scribbling notes, the white police chief at his side as the sometimes-chaotic scene unfolded. The mayor admitted that he had not successfully diversified the police department, which is more than 90% white in a city that's roughly 40% minority, and took the blame for this month's shooting not being recorded on the officer's body camera.

"At the end of the day, I'm responsible," he said.

Responding to demands from residents, Buttigieg has asked the Department of Justice to investigate the police shooting and urged the local prosecutor investigating the case to ask a judge to appoint an independent prosecutor, something he did this week .

Policing activist DeRay Mckesson said he spoke to Buttigieg for about an hour on Wednesday evening after his campaign reached out. McKesson, who encouraged Buttigieg to make the police department's full use-of-force policy public, described the conversation as "thoughtful," and said the mayor was "not defensive, invited feedback and pushed when he disagreed or needed more clarification."

"Pete came prepared, having reviewed data and approaches from other cities and was able to ask direct questions and engage in substantive policy and practice conversation about policing," Mckesson said Thursday.

Buttigieg has cautiously returned to the campaign trail, travelling to Florida on Monday to speak at a grassroots fundraiser where he may have tested debate night messages. Before a friendly audience in Fort Lauderdale, Buttigieg noted, "My own city is hurting right now," before shifting his focus to national political leaders he said have ignored issues like policing and climate change.

"When something happens that pits one member of your family against another, when you've got a community looking for answers and a department looking for leadership, you have to show up. You have to walk into that," he said. "And you have to acknowledge not only the desire to defend everything you've done but the need to face everything you haven't and what's ahead. Leadership consists of facing reality. And right now, I'm afraid our leaders at the national level are at war with reality."

Buttigieg also has faced criticism from the South Bend police union, which accused him of focusing on the shooting "solely for his political gain and not for the community he serves." On Wednesday, Logan's family filed a lawsuit in federal court against the officer and the city of South Bend, citing excessive deadly force. Buttigieg is not a defendant in the lawsuit.

But "at least he's not running from it," said Jackson, who spoke with Buttigieg earlier this week by phone. The civil rights icon said he stressed to the mayor that the police and fire departments must reflect the diversity of the community they serve and live within that community, or they risk being seen as "occupiers."

Buttigieg acknowledged on Sunday that the decision to hold the town hall may not have been smart but added, "I just think it's my job."