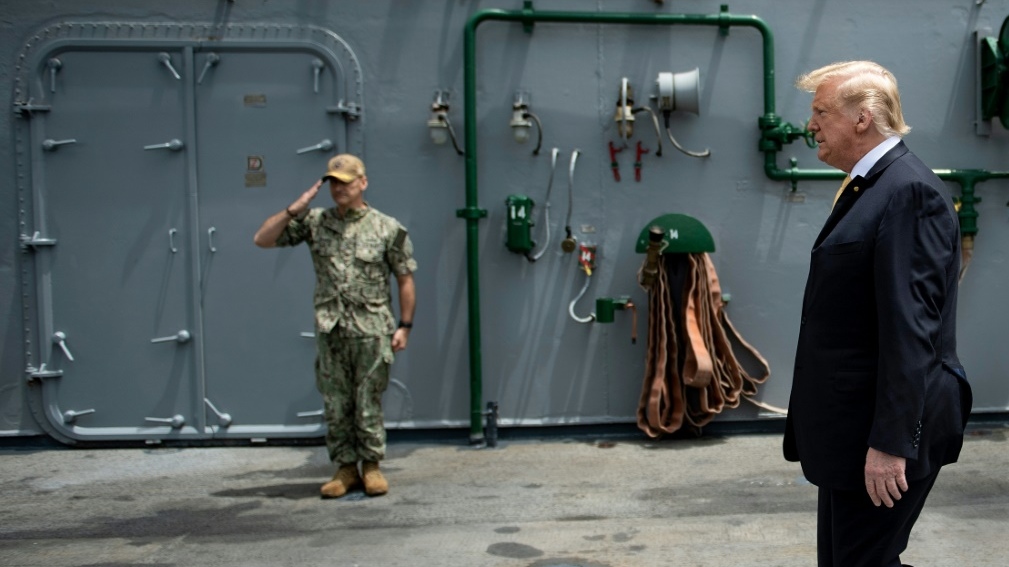 Trump had a combative political relationship with McCain, who died in August and was taken prisoner and tortured during the Vietnam war. (AFP)

The comments from acting Defense Secretary Patrick Shanahan came after US media reports said attempts were made to obscure the USS John McCain's name during Trump's visit to a US military facility in Japan on Tuesday.

Crew serving on board the 154-metre (505-foot) vessel, whose uniforms carry its name, were even prevented from attending a speech Trump delivered from a neighbouring ship, the reports said.

The Wall Street Journal, which first reported the story, said Shanahan was aware of concern about the ship's name and "approved measures to ensure it didn't interfere with the president's visit."

But Shanahan, currently in Asia on a regional tour, denied any involvement.

"I never authorized and never approved any action around the movement or activity regarding that ship," he told reporters on a flight from Jakarta to Singapore.

He said he had asked his chief of staff to "look into the matter".

"The military needs to do their job and their job is to stay out of politics."

The Journal said the request came from an official briefed by the White House and the Seventh Fleet, which is based in Japan.

"USS John McCain needs to be out of sight," the email seen by the Journal said. "Please confirm #3 will be satisfied," it added, referring to the request.

The order apparently posed a conundrum because the ship was undergoing repairs and would have been difficult to move before Trump's Tuesday visit.

In response, a tarpaulin was hung over the ship's name, which also refers to McCain's father and grandfather, the Journal said. The tarpaulin was removed before Trump arrived, but a barge was moved closer to the ship, blocking the view of its name.

Contacted by AFP, a spokesman for the Seventh Fleet said that photos showing a tarp over the name of the ship were from Friday and that the barge was moved out of the way on Saturday, days before Trump's visit.

The New York Times said sailors from the McCain were not invited to hear Trump speak, unlike those serving on other US warships at the base.

And when several showed up anyway, wearing uniforms bearing the name of the ship, they were turned away.

Trump tweeted shortly after the reports to deny any knowledge.

"I was not informed about anything having to do with the Navy Ship USS John S. McCain during my recent visit to Japan," he wrote.

Despite never serving in the military himself, Trump mocked McCain's war hero status in 2015

"Nevertheless, @FLOTUS and I loved being with our great Military Men and Women - what a spectacular job they do!"

Trump had a combative political relationship with McCain, who died in August and was taken prisoner and tortured during the Vietnam war.

Despite never serving in the military himself, Trump mocked the moderate Republican's war hero status in 2015.

McCain, a respected figure in U.S. politics for decades who himself ran for president twice, withdrew his support for Trump in the 2016 presidential election and blocked Trump's healthcare efforts in Congress in 2017.

And before the senator died of brain cancer at the age of 81, he said he didn't want Trump attending his funeral.

Even after McCain's death, the president has continued to make his dislike clear: "I was never a fan of John McCain and I never will be," Trump said in March.

"Trump is a child who will always be deeply threatened by the greatness of my dads incredible life," McCain's daughter Meghan tweeted Wednesday evening after the reports emerged.