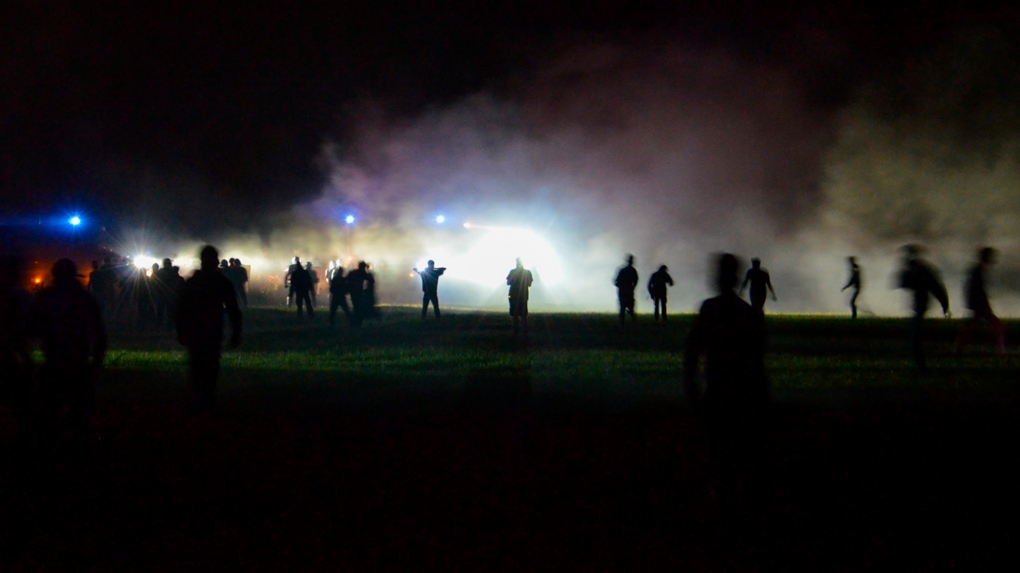 Youths stand in a field during clashes as police tried to break up an unauthorized rave party near Redon, Brittany, Friday June 18, 2021. Police repeatedly fired tear gas and charged clusters of violent partiers who hurled metal balls, gasoline bombs and other projectiles at security forces, according to images of the clashes shared online and the top government official in the region. Local authorities estimated about 1,500 people took part despite a local ordinance banning the event. (AP Photo)

PARIS -- French police clashed with party-goers as they tried to break up an unauthorized rave in western France, authorities said Saturday. A 22-year-old man lost his hand and several others were injured amid the violence, including police.

The tensions erupted in a field near the Brittany town of Redon on Friday night, just two days before France lifts an overnight virus curfew that's been in place for more than eight months and has prompted growing frustration among young people.

Police repeatedly fired tear gas and charged clusters of violent partygoers who hurled metal balls, gasoline bombs and other projectiles at security forces, according to images shared online and comments by the top government official in the region, prefect Emmanuel Berthier. Local authorities estimated about 1,500 people took part in the event despite a local ordinance banning it.

Berthier accused the attendees of "extreme" and "inexcusable" violence. It took police more than seven hours to disperse the crowd and authorities were still evacuating people from the field Saturday morning, Berthier told reporters.

Regional prosecutor Philippe Astruc said three investigations are under way into the clashes, including how the 22-year-old lost his hand. Regional gendarme chief Pierre Sauvegrain told France-Info radio that the man was believed to have picked up an object that exploded.

Other investigations are probing violence that left five police officers injured, and looking into who organized the party.

An underground New Year's Eve rave party in the same area drew at least 2,500 people and led to multiple arrests. Participants in Friday night's event said they were honoring a man killed in 2019 as police cleared out another unauthorized party in the nearby city of Nantes.

The tough stance by French police against such raves has grown tougher amid virus restrictions.

France has been gradually lifting restrictions in recent weeks as infections wane and vaccinations rise. France's curfew, among the strictest and longest in Europe, is set to expire on Sunday.

Revelers have defied authorities and staged rogue parties in multiple European countries as the weather warms and frustrations with virus restrictions mount.

In neighbouring Germany, about 4,000 people came together at a park in Hamburg on Friday night, drinking and celebrating despite current pandemic rules banning such big groups. Police tried appealing to people several times to go home but when their calls were ignored, officers decided to clear the park, the German news agency dpa reported Saturday.

Police were attacked with bottles and two officers were slightly injured, but most people had left by 1 a.m., police said.

'Ping pong with the Ministry of Health': Canadians vaccinated abroad struggle to be counted in national tallies

Afghanistan running out of oxygen as COVID-19 surge worsens