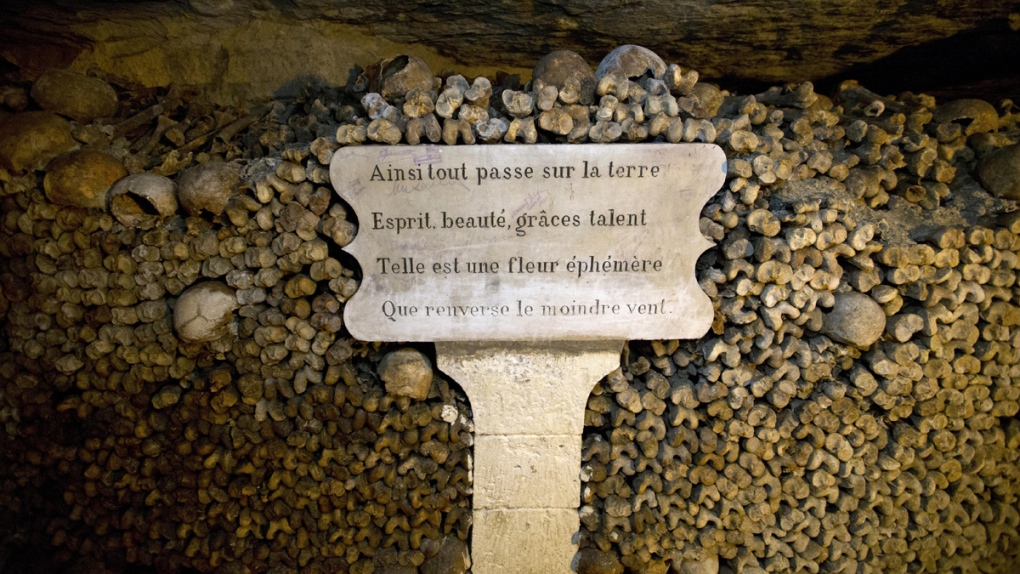 A plaque reading, "Everything fades away on earth, Spirit, Beauty, Grace, Talent, as an ephemeral flower that is knocked down by the lightest wind" wedges skulls and bones stacked at the Catacombs in Paris, France, Tuesday, Oct. 14, 2014. (AP / Francois Mori)

PARIS -- As if visiting the Paris Catacombs in the daytime wasn't creepy enough -- you can now visit the underground maze of skeletons after nightfall, too. That is if you dare defy the warning at the entrance: "Stop, this is the empire of Death."

The subterranean tunnels, stretching 2 kilometres (1.2 miles), cradle the bones of some 6 million Parisians from centuries past and once gave refuge to smugglers.

Twenty meters (66 feet) beneath the French capital's medieval streets, labyrinthine walls of bones and skulls bring visitors into the city of the dead, in a spooky atmosphere that attracts history enthusiasts as well as visitors looking for a chilling place to celebrate Halloween.

The site used to close at 5 p.m., but is now staying open until 8 p.m. The change is mainly aimed at allowing more people to visit and reducing long lines, but it also adds to the thrill: entering and leaving the catacombs after dark feels different from doing it in daylight.

Human remains started to be transferred to the former underground quarries of Paris in 1786, when the main cemetery of Paris --the Cemetery of Innocents -- was closed for public health reasons. From 1809 on, the catacombs were rearranged into organized galleries, with piled bones forming walls and pillars, and even some artistic shapes made of femurs and skulls.

Valerie Guillaume, director of the Catacombs, stressed the philosophical nature of the unusual tourist site.

"The place was not conceived to be a horror place, but as a reflection on the meaning of life and death," she said.

Sylvie Robin, the Catacombs' curator, described the extensive smuggling that went on in the tunnels in the past and contributed to its scary reputation.

"That's the origin of all the legends," she said, because the smugglers used to scare the Parisians with lights and noises, so that no one would come and see what they were doing.

A look inside Paris' bone-chilling Catacombs