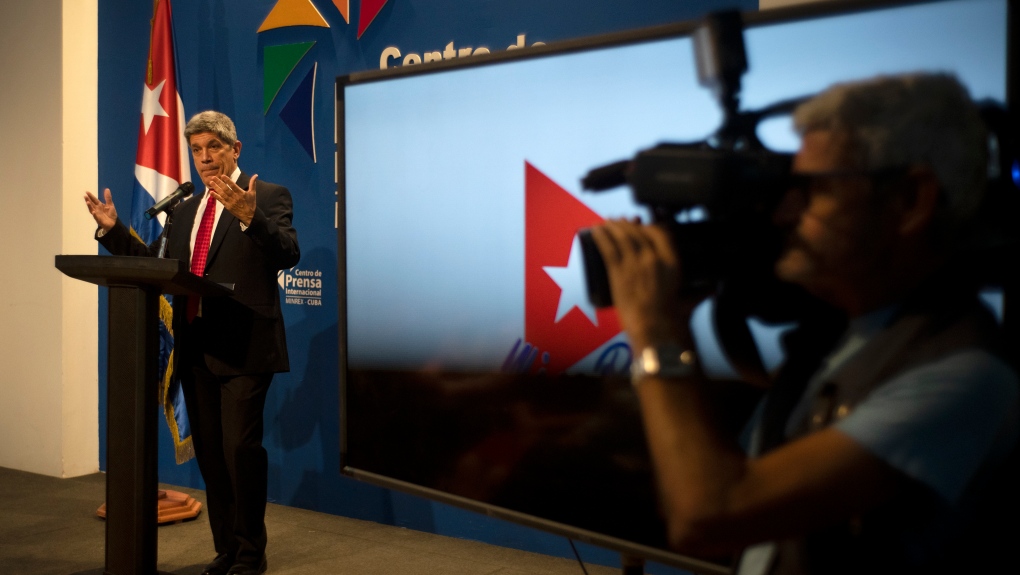 Cuban vice-Foreign Affairs Minister Carlos Fernandez de CossÃ­o speaks during a press conference in Havana, Cuba, Tuesday, Nov. 15, 2022. Officials from Cuba and the United States met Tuesday in Havana to discuss immigration issues, a topic of special interest due to the record exodus of islanders to the US. (AP Photo/Ramon Espinosa)
HAVANA -

On the day Migdalia Gutierrez was set to meet with an American delegation in Havana, Cuban state security were waiting outside her home in a white car at 6 a.m. sharp.

Gutierrez and at least five other parents of participants in Cuba's 2021 protests were temporarily detained and prevented from visiting the delegation Wednesday, according to U.S. officials and activist groups on the island. Her son and hundreds of other protesters are serving lengthy prison sentences after joining last year's demonstrations. Cuban officials have not charged them directly for protesting, but rather for public disorder, theft and other crimes.

"It's not convenient for them that we speak about the July 11th protests and what's happening with our children," the 45-year-old mother told The Associated Press. Gutierrez said she and other parents were detained "so that we didn't talk."

"But we aren't going to stop talking," she said.

The detentions drew sharp criticism from the U.S. government, coming as they did amid bilateral efforts to ease U.S.-Cuba relations. As of Thursday morning, Gutierrez said she and others had still not been able to meet with the U.S. visitors.

Cuban officials did not respond to a request for comment.

On July 11 and 12, 2021, thousands protested across Cuba, airing grievances against the government ranging from food shortages to economic turmoil. The demonstrations were the biggest in decades and were met with harsh crackdowns. Many young people are among those serving prison sentences.

Gutierrez's son Brusnelvis Cabrera Gutierrez was sentenced to 10 years, she said. Now 22, he's been in prison for a year.

Gutierrez and other parents who vocally criticize Cuban authorities say they continue to be harassed and followed, not out of the norm in a nation where political expression is tightly controlled.

She was among a group set to visit Wednesday with an American delegation led by Emily Mendrala, deputy assistant secretary for Western Hemisphere Affairs. The delegation traveled to the island to discuss migratory issues with the Cuban government amid one of the largest migrations from Cuba to the U.S. in decades. It was the second such meeting within a week, and the two nations on Tuesday had expressed optimism over future collaboration.

But Gutierrez said officers detained her as she was leaving the house and held her for five hours, making her miss the appointment.

Cellphone video and images that Gutierrez shared with the AP show the state security car waiting outside her home on the fringes of Havana, and two officers taking her away. Other parents were blockaded in their houses, said opposition organization Justice 11J, which advocates for those on trial or serving prison sentences in connection with the protests.

Gutierrez and the other parents were released later that day, according to the organization. Justice 11J said eight parents were detained or blocked; U.S. officials said at least six were.

"These families have a right to speak to the international community and anyone else they choose regarding the condition of their loved ones," he said.

The government's treatment of protesters has always been a sticking point for the Biden administration as it inches toward mending relations with the communist-ruled island.

A total of 790 people who participated in the 2021 protests face prosecution for sedition, violent attacks, public disorder, theft and other crimes, according to the latest figures released in January by Cuba's attorney general's office.

More than 500 are serving prison sentences, according to numbers from Justice 11J.

Cuban authorities attributed sedition charges to "violence demonstrated" during the protests, noting that some protesters threw stones at hospitals, gasoline stations and other facilities, and also looted.

But Gutierrez -- alongside many other family members of those serving sentences -- maintains that her son is not a criminal. She said he was sitting on a motorcycle nearby during one of the protests.

"He never hurt anyone," she said.

Before and after: How Toronto's MARZ uses AI to make motion picture magic

While much of internet is still buzzing about the wonders of ChatGPT, a Toronto-based technology and visual effects company is making its own splash in Hollywood using artificial intelligence.

LIVE @ 9 ET | Biden says in State of Union that US is 'unbowed, unbroken'

U.S. President Joe Biden is using his State of the Union address Tuesday night to call on Republicans to work with him to 'finish the job' of rebuilding the economy and uniting the nation as he seeks to overcome pessimism in the country and navigate political divisions in Washington.