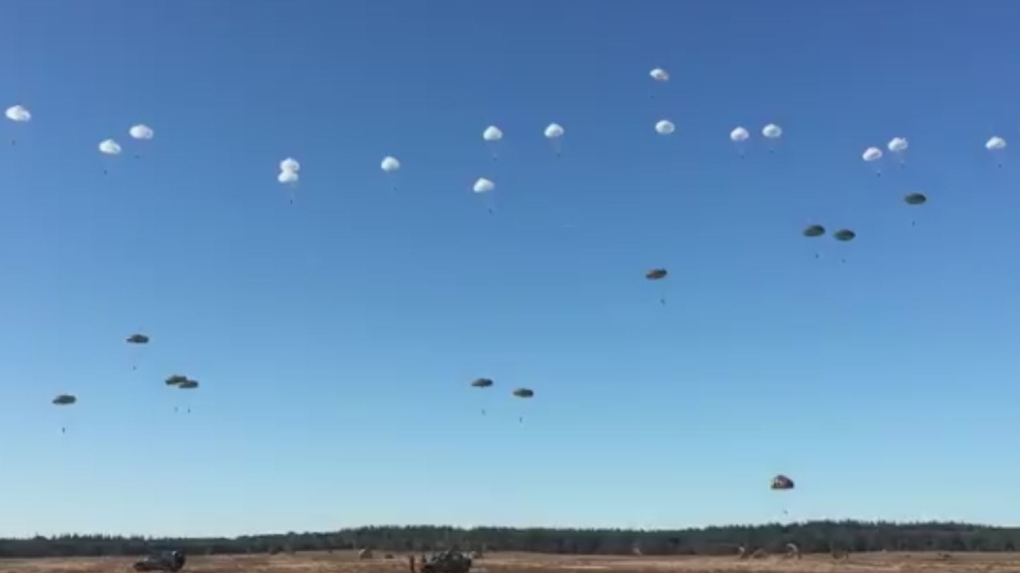 Parachutes glowing gold and white against clear blue skies, hundreds of paratroopers floated to the ground in the eastern Netherlands on Saturday to mark the 75th anniversary of a daring but ultimately unsuccessful mission that Allied commanders hoped would bring a swift end to World War II. (16 Air Assault Brigade/Twitter)

GINKEL HEATH, Netherlands -- Parachutes glowing gold and white against clear blue skies, hundreds of paratroopers floated to the ground in the eastern Netherlands on Saturday to mark the 75th anniversary of a daring but ultimately unsuccessful mission that Allied commanders hoped would bring a swift end to World War II.

Operation Market Garden dropped nearly 35,000 paratroopers deep behind enemy lines in the Nazi-occupied Netherlands. After landing, the troops were to capture and secure key roads and bridges so Allied forces massed in Belgium could pour into Germany's industrial heartland.

Recreating the mass drops of September 1944, military aircraft flew low over Ginkel Heath on Saturday and current military parachutists leaped out. Thousands of spectators watched and applauded the soldiers once they were on the ground.

One veteran of the original landing, Sandy Cortmann, jumped again Saturday while strapped to a British paratrooper. After their landing, a wheelchair took Cortmann to a tent to watch the anniversary ceremony.

British veteran Les Fuller was 23-years-old when he leapt behind enemy lines close to Arnhem with orders to capture the city's bridge over the Rhine. Now 98, he still remembers it clearly.

"It was a day like today. Weather was just like this; lovely sunny day," he said, adding there was no opposition on the Sunday afternoon when he landed close to two German soldiers lying in the heathland with their girlfriends.

"They were quite surprised to see me," he added with a cheeky smile.

But as he and other paratroopers got to Arnhem there was plenty of opposition from German troops. He was hit by a German shell and his right arm was amputated shortly afterward.

The Allied troops met stubborn German resistance in and around Arnhem. Their advance stalled on a bridge spanning the River Rhine, a battle immortalized in the book and Hollywood film "A Bridge Too Far."

More Allied troops -- about 11,500 -- died in the nine days of Operation Market Garden than during the D-Day landings in France two months earlier.

Veterans of the operation, a group with ever-dwindling members, attended the mass parachute drop, joined by Britain's Prince Charles, the former Dutch queen, Princess Beatrix, and other dignitaries.

Charles, wearing camouflage fatigues and the parachute regiment's maroon beret, mingled with the veterans after the service as more paratroopers drifted to the ground behind him.

NATO Secretary General Jens Stoltenberg said he attended to pay tribute to the World War II heroes and said that Operation Market Garden showed "the importance of forces from different countries being able to operate together and that is exactly what NATO is about."

"For that reason and on subsequent battlefields from the Falkland Islands to Afghanistan, when facing adversity and danger, British paratroopers' have spoken the same words," he said. "'Remember Arnhem, lads.' 'Keep going, we won't let them down ... show them the Arnhem spirit."'

The paratroopers’ tribute.
The first wave of 1,500 paratroopers from 9 nations jumping onto Ginkel Heath - used as DZ Y in 1944 - to honour the sacrifice and bravery of all who served on Op Market Garden.#Arnhem75 pic.twitter.com/SzazP5smYu