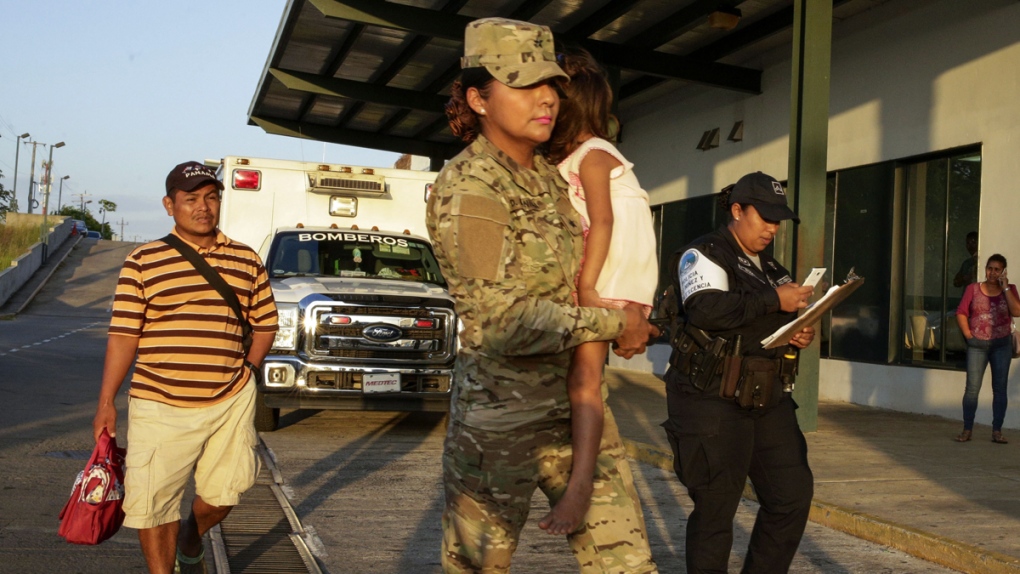 Jose Gonzalez, left, follows his 5-year-old daughter, carried by a police officer, as they leave a hospital in Santiago, Panama, on Jan. 16, 2020. (Arnulfo Franco / AP)

PANAMA CITY -- Seven people were killed in a bizarre religious ritual in a jungle community in Panama, in which indigenous residents were rounded up by about 10 lay preachers and tortured, beaten, burned and hacked with machetes to make them "repent their sins," authorities said Thursday.

Police freed 14 members of the Ngabe Bugle indigenous group who had been tied up and beaten with wooden cudgels and Bibles.

Local prosecutor Rafael Baloyes described a chilling scene found by investigators when they made their way through the jungle-clad hills to the remote Ngabe Bugle indigenous community near the Caribbean coast Tuesday.

Alerted by three villagers who escaped and made their way to a local hospital for treatment earlier, police were prepared for something bad, Baloyes said, but were still surprised by what they discovered at an improvised "church" at a ranch where a little-known religious sect known as "The New Light of God" was operating.

"They were performing a ritual inside the structure. In that ritual, there were people being held against their will, being mistreated," Baloyes said.

"All of these rites were aimed at killing them if they did not repent their sins," he said. "There was a naked person, a woman," inside the building, where investigators found machetes, knives and a ritually sacrificed goat, he said.

The rites had been going on since Saturday, and had already resulted in deaths, Baloyes said.

About a mile (2 kilometres) away from the church building, authorities found a freshly dug grave with the corpses of six children and one adult. The dead included five children as young as a year old, their pregnant mother and a 17-year-old female neighbour.

"They searched this family out to hold a ritual and they massacred them, mistreated them, killed practically the whole family," Baloyes said, adding that one of the suspects in the killing is the grandfather of the children who were slain.

All the victims, and apparently all the suspects, were members of the same indigenous community.

Ricardo Miranda, leader of the Ngabe Bugle semi-autonomous zone known as a Comarca, called the sect "satanic" and said it went against the region's Christian beliefs.

"We demand the immediate eradication of this Satanic sect, which violates all the practices of spirituality and co-existence in the Holy Scriptures," Miranda said.

Apparently, the sect is relatively new to the area, and had been operating locally only for about three months.

Things reportedly came to a head Saturday, when one of the church members had a vision.

"One of them said God had given them a message," Baloyes said. That message apparently boiled down to making everyone repent or die.

The Ngabe Bugle are Panama's largest indigenous group and suffer from high rates of poverty and illiteracy.

It was not clear what belief or affiliations "The New Light of God" church has. A well-established evangelical church known as Luz del Mundo said in a press statement that it had no ties to the case.

The area is so remote that helicopters had to be used to ferry the injured out to hospitals for treatment. They included at least two pregnant women and some children.