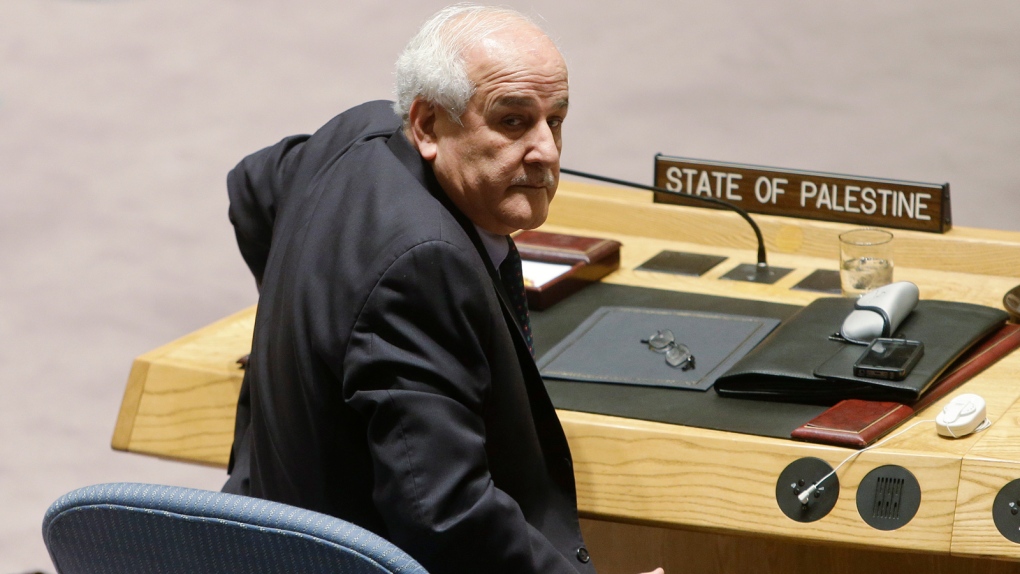 RAMALLAH, West Bank -- Turning up the pressure on Israel, the Palestinians announced Wednesday that they are joining the International Criminal Court to pursue war-crimes charges against the Jewish state -- a risky, high-stakes move that brought threats of retaliation from Israel and criticism from the U.S.

Palestinian President Mahmoud Abbas acted a day after suffering a defeat in the UN Security Council, which voted down a resolution setting a three-year deadline for the establishment of a Palestinian state on lands occupied by Israel.

"We want to complain. There's aggression against us, against our land. The Security Council disappointed us," Abbas said.

Turning to the international court at The Hague marks a major policy shift, transforming Abbas' relations with Israel from tense to openly hostile. The ultimate goal is to pressure Israel into withdrawing from the territories and agreeing to Palestinian statehood.

The strategy carries risks, including the possibility the Palestinians themselves could be accused of war crimes over rocket attacks by the extremist group Hamas on Israeli population centres and other violence against Jewish targets.

Israeli Prime Minister Benjamin Netanyahu vowed to take unspecified "retaliatory steps." In Washington, State Department spokesman Jeff Rathke said the U.S. was "deeply troubled" by the Palestinians' "escalatory step." He said it was "entirely counterproductive and does nothing to further the aspirations of the Palestinian people for a sovereign and independent state."

At the international court, the Palestinians could seek to have Israeli military or political figures prosecuted for alleged crimes involving settlement construction on occupied lands or actions by the military that cause heavy civilian casualties, for instance.

Israel is not a member of the court and does not recognize its jurisdiction. And the court has no police force and no authority to go into Israel and arrest suspects. But it could issue arrest warrants that would make it difficult for Israeli officials to travel abroad.

Abbas has been under heavy pressure to take stronger action against Israel amid months of rising tensions over the collapse of U.S.-brokered peace talks last spring, a 50-day war between Israel and Palestinian militants in Gaza over the summer, a recent spate of deadly Palestinian attacks on Israeli targets, and Israeli restrictions on access to a key Muslim holy site in Jerusalem.

The Palestinians planned to submit the paperwork for joining the ICC to UN Secretary-General Ban Ki-moon on Wednesday afternoon, but postponed it, probably until Friday. Handing over the documents is the last formal step for Palestine to become a member of the ICC, which would happen in about 60 days.

Israel could take a number of retaliatory actions, including building more settlements, restricting financial transfers to the Palestinians, or curbing certain privileges. The U.S. has not said how it will react, but it provides hundreds of millions of dollars in aid to the Palestinians.

In a statement, Netanyahu said Israel will protect its troops from prosecution, calling the country's army "the most moral" in the world. He warned that Abbas' Palestinian Authority is "the one who needs to fear the International Criminal Court."

The court would be able to prosecute only crimes committed from here on in, not past offences, said Robbie Sabel, an international law expert at the Hebrew University of Jerusalem. Sabel agreed the Palestinians themselves could be at risk of prosecution.

"On the other side of the coin -- and this is why the Palestinians have hesitated up until now -- is that any Palestinian who commits a war crime anywhere in the world and has not been tried by a Palestinian court could also be subject to the jurisdiction of the court," he said. "So it works both ways."

The Palestinian UN ambassador, Riyad Mansour, has said repeatedly that the Palestinians are not afraid of that possibility.

Balkees Jarrah, international justice counsel at Human Rights Watch, called the Palestinian move to join the court "an overdue but welcome step toward impartial justice for serious crimes by Israelis and Palestinians alike. This move by Ramallah sends a strong message that the days of near total impunity that have characterized this conflict could be ending."

The Palestinians seek the West Bank, Gaza Strip and east Jerusalem -- areas captured by Israel in 1967. Netanyahu, who is seeking re-election in March, has said Palestinian independence can be achieved only through negotiations.

Turning to the court became an option for Abbas in 2012 after the United Nations recognized "Palestine" as a non-member observer state.

Abbas made his announcement as the long-dominant Fatah party marked its 50th anniversary.

Yasser Arafat founded Fatah in 1965 with the goal of destroying Israel. The party rose to prominence in the 1970s and '80s with a series of hijackings and other attacks. Over time, Fatah moderated and accepted Israel's right to exist, while seeking a Palestinian state. Arafat died in 2004.