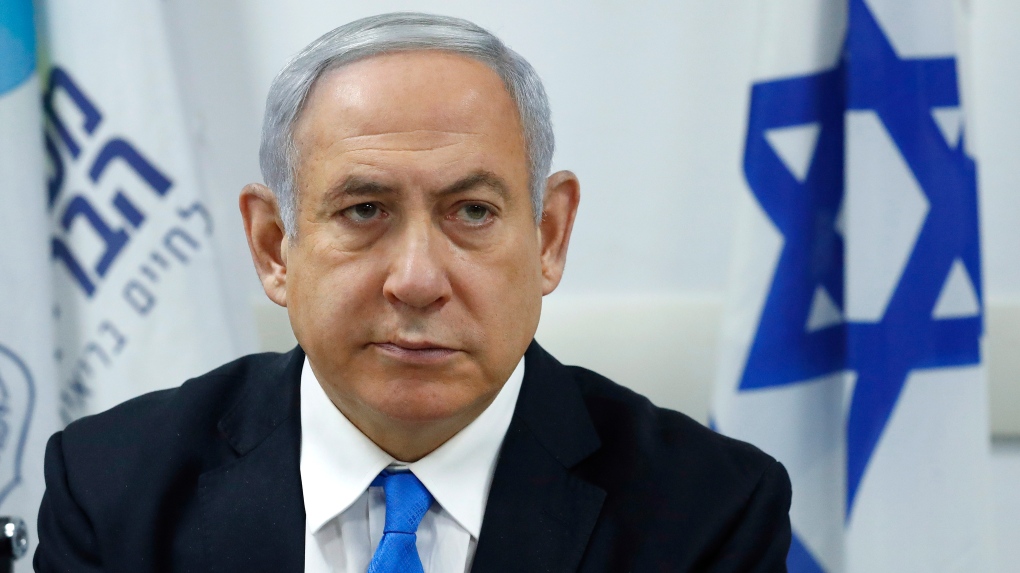 JERUSALEM -- Gaza militants resumed their intense bombardment of southern Israel on Monday, with some rockets slipping through Israel's Iron Dome defence system and one landing in the yard of a kindergarten.

There was no word of casualties, but the second day of violence threatened to unleash a new round of hostilities just a week before Israel heads to elections. Israeli Prime Minister Benjamin Netanyahu threatened Gaza's Hamas rulers with a "war" if the new round of rocket fire continued, ramping up his rhetoric amid the final stretch of his campaign.

Speaking to Israel's Army Radio, Netanyahu said he'd conveyed a message to Hamas that if it did not stop Gaza militants behind the attacks, Israel would target Hamas directly.

"If you don't shoot them, we will shoot you. I'm talking about a war," he said. "I only go to war as a last option but we have prepared something you can't even imagine."

Netanyahu's interview was interrupted with news of fresh air raid sirens warning of incoming rockets, as Palestinian militant fire resumed midday after a morning lull. The Israeli military said it identified 14 rockets fired in the hour-long spree, of which it intercepted 12. Shortly after, the military began striking sites linked to militants in Gaza.

The United Nations' Mideast envoy Nickolay Mladenov called on Twitter for "an IMMEDIATE stop to the firing of rockets that only risks dragging Gaza into another destructive round of hostilities with no end in sight!"

The Islamic Jihad militant group fired at least 20 rockets on Sunday after Israeli forces killed a Palestinian militant who tried to place a bomb along the Israel-Gaza barrier fence, and then removed his body with a bulldozer. The image outraged Palestinians, leading to the rocket fire. Israel responded by striking targets linked to militants in Gaza and Syria. As a precaution, schools were closed in Israeli areas adjacent to Gaza and restrictions placed on outdoor public gatherings.

Israel and Hamas have engaged in three wars between 2008 and 2014 and several intense rounds of violence after that. Israel and the Islamic Jihad group engaged in a heavy round of fighting last November after the Israeli military killed a top Islamic Jihad commander. Since then, Israel and Gaza's more powerful Hamas group have been working through Egyptian mediators to cement an informal cease-fire. But Islamic Jihad has continued to try to carry out attacks.

The sudden exchanges after months of relative calm put Israel's tense security situation back on the agenda a week before the the country's third election in less than a year. The campaign has thus far largely focused on domestic issues and Netanyahu's precarious legal situation after he was indicted on corruption charges.

Despite the tough talk and a typical preference to highlight his national security credentials, Netanyahu appears to have little appetite for a major confrontation as he fights for re-election.

"Israel didn't seek escalation in Gaza. On the contrary, as Prime Minister Benjamin Netanyahu entered the crucial stage of the battle for his political life, it seems the last thing he needed was a violent eruption in the strip," wrote Amos Harel, the military affairs commentator for the Haaretz daily. "An uncontrolled upsurge at this time could actually hurt Netanyahu's chances more than it would help him."