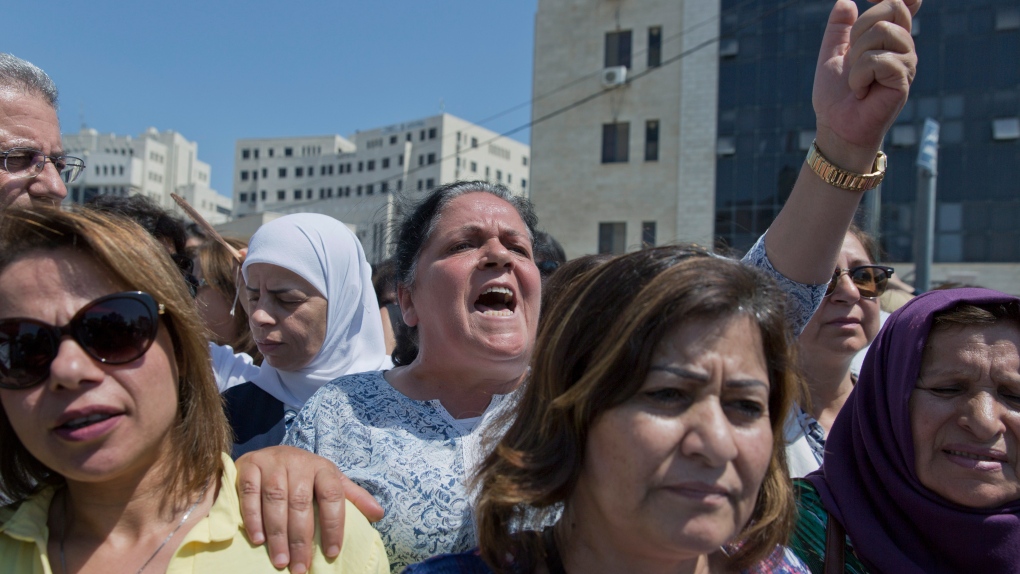 A Palestinian woman chants slogans during a rally in front of the Prime Minister's office, in the West Bank city of Ramallah, Monday, Sept. 2. 2019. (AP Photo/Nasser Nasser)

RAMALLAH, Palestinian Territory -- Hundreds of Palestinian women held a demonstration in the West Bank on Monday to demand an investigation into the death of a 21-year-old woman who many suspect was the victim of a so-called honour killing.

Israa Ghrayeb, a makeup artist from a village near Bethlehem, died last month after being hospitalized with severe injuries. Friends and women's rights activists suspect her male relatives assaulted her over a video shared online that purportedly showed her out with a man who had proposed to her.

The family says she jumped from a balcony of their home after being "possessed by demons."

In conservative parts of the Middle East, women have been murdered by male relatives over suspicions they violated strict rules on relationships and marriage. Such killings occur from time to time in the Palestinian territories, but precise statistics are hard to come by. The case has sparked an outcry online and in Arab media, leading to widespread calls for justice.

"There is a criminal suspicion in this case," said Suhair Farraj, one of the protesters. "We demand a serious investigation."

Ghrayeb died on Aug. 22 after sustaining serious injuries at home nearly two weeks earlier. Her family released a statement saying she jumped off a second-story balcony, breaking her spine and suffering cuts to her face. It said she had been possessed for some time, and was receiving "treatment" from local Muslim clerics.

Her friends have circulated what they say is an audio recording of her cousin complaining to her brothers about a video Ghrayeb posted on Instagram in which she appears with a man who had recently proposed to her.

Ghrayeb's Instagram page, now closed, had over 12,000 followers, a popular account in her close-knit community. Even though the family says it approved the proposal, the two were not formally engaged. Among very conservative Muslims, their going out together would be seen as inappropriate and potentially bringing shame to the whole family.

The family said in a statement that police have taken testimony from them and interviewed Ghrayeb in the hospital prior to her death.

Hours after the protest, a Palestinian official said that three family members were detained for interrogation. The official was not authorized to brief reporters and so spoke on condition of anonymity.

The Palestinian Authority, which governs parts of the Israeli-occupied West Bank, has vowed to investigate and bring any perpetrators to justice. Attorney General Akram Khatib visited Bethlehem on Sunday to oversee the investigation.

Amal Hamad, the minister of women's affairs in the Palestinian Authority, left the government's weekly meeting Monday to address the protesters.

"If there was a crime the perpetrator will be tried," she said, adding that she had clear instructions from President Mahmoud Abbas to follow up on the case.

Women's rights activists say that while the Palestinian Authority has amended decades-old laws that once provided for leniency in honour killings, they still often go unpunished. They say authorities are often hesitant to get involved in what is still seen by many as a private matter.

Palestinian police spokesman Louay Arzeikat said honour killings have declined in recent years, but did not provide figures to substantiate that. Women's rights activists say exact figures are hard to come by because the motives of such killings are not always clear.

"If the Palestinian Authority wants to apply the international conventions that it has joined, it needs to change the whole set of laws. Until now these laws are old and full of flaws that can let violent perpetrators get away or get lenient punishments," she said.