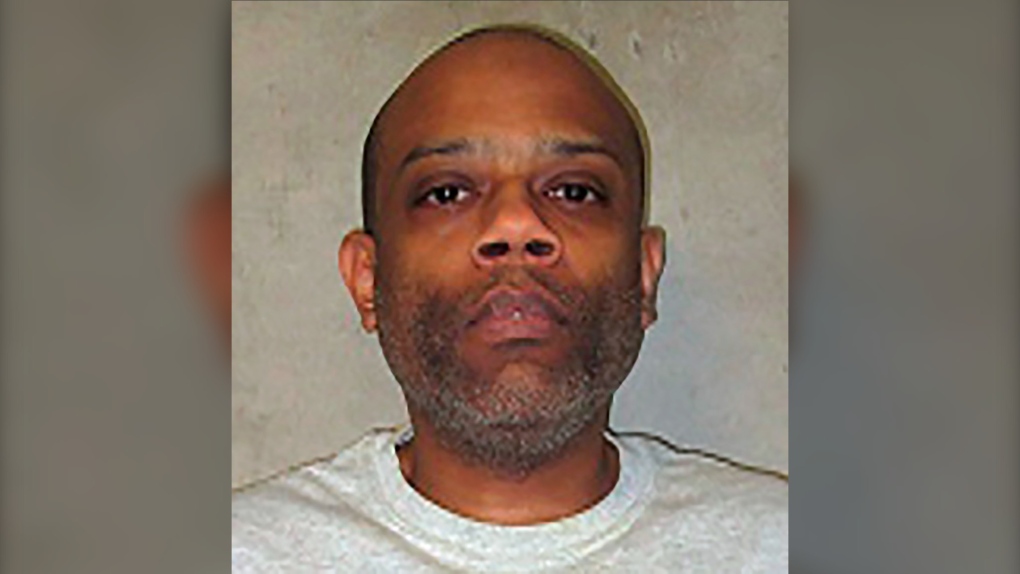 Oklahoma executed a man Thursday for the brutal slayings of two hotel workers during a robbery in 2001.

Donald Grant, 46, received a lethal injection at the Oklahoma State Penitentiary in McAlester and was declared dead at 10:16 a.m. It was the first execution in the U.S. in 2022 and the third in Oklahoma since the state resumed lethal injections in October following a nearly seven-year hiatus.

"Yo, God, I got this," Grant said while lying strapped to the gurney, delivering his disjointed last words for two minutes. "No medication. I didn't take nothing. Brooklyn for life."

Even after Grant was told his two minutes to deliver his last words had ended and the microphone inside the execution chamber was turned off, Grant continued to speak to about seven witnesses who attended the execution on his behalf.

A few minutes later, Grant's eyelids began to droop and he appeared to be sleeping. After a doctor entered the room to conduct a consciousness check, rubbing his sternum and calling his name, Grant could be heard snoring as a prison official declared him unconscious at 10:09 p.m. He appeared to stop breathing about two minutes later.

Shirl Pilcher, the sister of one of Grant's victims, Brenda McElyea, said her family felt that justice had been served.

"Although Donald Grant's execution does not bring Brenda back, it allows us all to finally move forward knowing justice was served," Pilcher said after witnessing his execution.

Grant had asked a federal judge to temporarily halt his execution, arguing that he should be reinstated as a plaintiff in a separate lawsuit challenging Oklahoma's three-drug lethal injection protocol as presenting a risk of unconstitutional pain and suffering. But both a federal judge and a three-judge panel of the 10th U.S. Circuit Court of Appeals in Denver previously denied that request. The U.S. Supreme Court denied Grant's request on Wednesday.

Several Oklahoma death row inmates with pending execution dates have sought to delay their executions after John Grant convulsed on the gurney and vomited after receiving the first dose of midazolam, a sedative, during his October execution.

John Grant's execution was the state's first since problems with the state's lethal injection protocols in 2014 and 2015 led to a de facto moratorium. Richard Glossip was just hours away from being executed in September 2015 when prison officials realized they received the wrong lethal drug. It was later learned the same wrong drug had been used to execute an inmate in January 2015.

The drug mix-ups followed a botched execution in April 2014 in which inmate Clayton Lockett struggled on a gurney before dying 43 minutes into his lethal injection -- and after the state's prisons chief ordered executioners to stop.

During a clemency hearing in November, Donald Grant admitted killing Brenda McElyea and Felicia Suzette Smith so that there would be no witnesses to his robbery of the Del City hotel. Court records show both women were shot and stabbed, and Smith was also bludgeoned. Prosecutors say both women also begged him to spare their lives before he killed them.

During November's hearing, he expressed "deep, sincere remorse" and apologized for the killings, but the state's Pardon and Parole Board voted 4-1 against recommending clemency.

Two of Donald Grant's attorneys, Susan Otto and Emma Rolls from the federal public defender's office, argued that he was mentally ill and had suffered brain damage that made him a candidate for mercy. They also discussed Grant's childhood growing up in a New York City housing project during the crack epidemic of the 1980s, a time when he was frequently beaten and members of his family experienced alcoholism, drug addiction and mental illness.

But the board also heard from members of McElyea's family, who tearfully urged them to reject clemency for him.

Pilcher, McElyea's sister, recalled the pain she experienced when she had to tell their father that McElyea had been killed.

"I had to call my dad and tell him his daughter, his baby girl, was dead," Pilcher said. "I had never seen him cry, but that night I heard him weep and it broke my heart."

The U.S. Supreme Court considered Thursday whether to let Alabama execute a death row inmate who claims an intellectual disability combined with the state's inattention cost him a chance to avoid lethal injection. The state executed Matthew Reeves, 43, by lethal injection Thursday night.

This story has been corrected to show the correct spelling of Shirl Pilcher's last name.

OPINION | Don Martin: Ford on cruise control to victory in Ontario while Alberta votes on killing Kenney as UPC leader