Oklahoma prepares to execute man for 1985 slaying of teacher 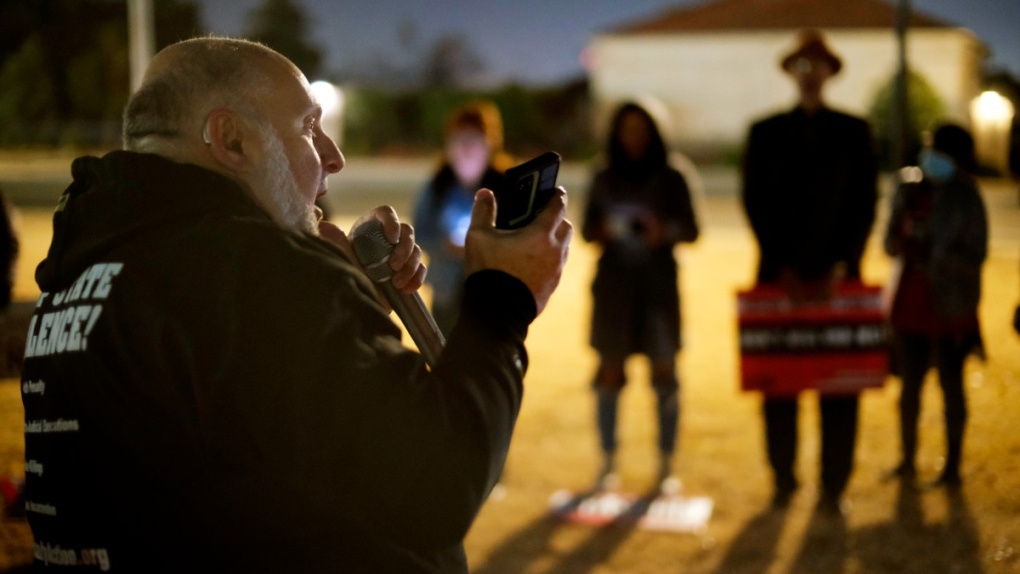 Abe Bonowitz talks with Bigler "Bud" Jobe Stouffer II on a phone and into a loudspeaker so the group can hear what he has to say and ask questions as members from Death Penalty Action, the Oklahoma Coalition to Abolish the Death Penalty and other allies in a park across the street from the governor's mansion in Oklahoma City, Dec. 8, 2021. (Doug Hoke/The Oklahoman via AP)

Oklahoma is preparing to execute a man Thursday for the 1985 shooting death of an Oklahoma City-area schoolteacher after federal courts rejected his claim that the state's three-drug lethal injection method is unconstitutional.

Bigler Stouffer II, 79, is set to receive a lethal injection at 10 a.m. at the Oklahoma State Penitentiary in McAlester. Stouffer would be the first person executed in Oklahoma since John Grant convulsed on the gurney and vomited during his lethal injection in October as the state ended a six-year execution moratorium brought on by concerns over its protocols.

Stouffer has maintained his innocence in the attack that left Linda Reaves dead and her boyfriend, Doug Ivens, seriously injured. He and his attorneys argued in court filings that the state's three-drug execution method poses a risk of unconstitutional pain and suffering and that Stouffer should be included among other death row plaintiffs in a federal lawsuit challenging the protocols. But his request for a stay of execution was denied by a federal district judge and the U.S. Court of Appeals for the Tenth Circuit. A final appeal with the U.S. Supreme Court was pending on Wednesday.

Stouffer was convicted and sentenced to death in 2003 after his first conviction and death sentence were overturned. At a parole board hearing last month, he said Ivens was shot as the two men fought over a gun at Ivens' home, and that Reaves was dead when he arrived.

"I was not present when Linda Reaves was shot," Stouffer told the board during a video appearance from prison. "I am totally innocent of the murder of Linda Reaves and my heart goes out to the family of Linda Reaves that have suffered as a result of her murder."

Prosecutors said Stouffer went to the home to borrow the gun from Ivens, then fatally shot Reaves and wounded Ivens to gain access to Ivens' US$2 million life insurance policy. At the time, Stouffer was dating Ivens' ex-wife.

Despite being shot three times with a .38-calibre pistol, including once in the face, Ivens survived and testified against Stouffer.

"Stouffer's heinous actions against Doug and Linda, his lies and manipulations in the years to follow, and his complete lack of sorrow and remorse for the hurt he caused should dictate one conclusion — the jury's death sentence must be carried out," attorneys for the state wrote in asking the Oklahoma Pardon and Parole Board to reject Stouffer's request for clemency.

Several members of the board voiced concerns about the state's ability to humanely execute people. But Republican Gov. Kevin Stitt ultimately rejected the board's recommendation that Stitt commute Stouffer's sentence to life in prison without parole.

Stitt did grant clemency to another death row inmate, Julius Jones, last month just hours before his scheduled execution, commuting his sentence to life in prison without the possibility of parole. That case had drawn outcry and protests over doubts about his guilt in the slaying of a businessman more than 20 years ago.

Executions in Oklahoma have typically been held in the evenings, but prison officials moved Stouffer's execution to 10 a.m. to make it easier for the prison to return to normal operations, said Oklahoma Department of Corrections spokesman Josh Ward.

"It was a logistical decision," Ward said. "This is still a functioning maximum-security prison ... and we need to get back to normal operations as quickly as possible."

Oklahoma had one of the nation's busiest death chambers until problems in 2014 and 2015 led to a de facto moratorium. Richard Glossip was just hours away from being executed in September 2015 when prison officials realized they received the wrong lethal drug. It was later learned the same wrong drug had been used to execute an inmate in January 2015.

The drug mix-ups followed a botched execution in April 2014 in which inmate Clayton Lockett struggled on a gurney before dying 43 minutes into his lethal injection — and after the state's prisons chief ordered executioners to stop.