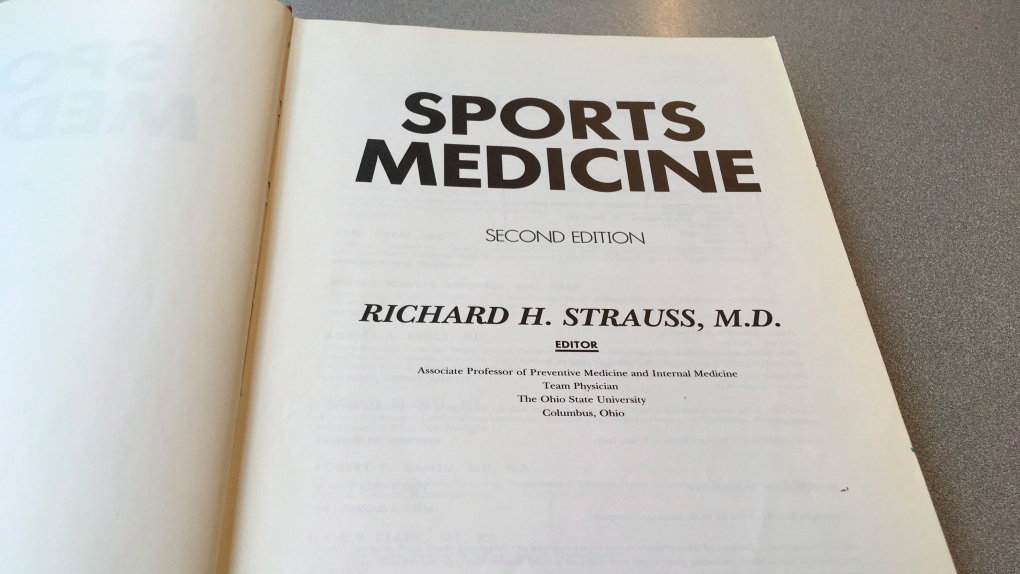 In this Monday, July 2, 2018, photo, a book edited by Dr. Richard Strauss sits on a table inside the Health Science Library on the campus of Ohio State University in Columbus, Ohio. (AP Photo/Mike Householder)

COLUMBUS, Ohio -- The Ohio State University team doctor accused of groping scores of young men decades ago also had an off-campus men's clinic that was marketed in the campus newspaper with a series of ads promising prompt treatment of genital problems, plus a student discount, according to two former employees.

The ads published in the fall of 1996 labeled it as a "Men's Clinics of America" and didn't mention the now-deceased physician, Richard Strauss, but the connection was confirmed by two former nursing students who say they did appointment-booking and other clerical work for Strauss. One of the former students said he was touched inappropriately by Strauss during an exam at the clinic, and he wonders if others were abused there.

The ex-employees describe a bare-bones clinic set up in an office building roughly a mile from campus: Strauss was the only doctor, contrary to the ads. He conducted some exams with no one else present and without wearing gloves. Information on the medical charts was minimal. Ohio State athletes occasionally dropped by for exams. All patients were directed from a waiting area to an exam room that had very little medical equipment, and then to a different exit so they wouldn't see anyone else afterward, the ex-employees said. One recalls using a cash box to hold payments.

It seemed then to be a real but oddly run part-time business, and it was understandable that patients with potentially embarrassing problems might appreciate privacy and discretion, but the allegations recently raised against Strauss cast it all in a much more suspicious light, the ex-employees said.

"It wasn't like any doctor's office I've ever seen, and I've been in a lot," said Brian Garrett, who said he briefly worked for Strauss but quit immediately after both witnessing and experiencing sexual abuse by the doctor during exams at the clinic one day. Garrett said he was embarrassed and repressed what happened, keeping it to himself until this year.

The second ex-employee, a former nursing student who works in health care, said Strauss sometimes mentioned that an athlete would be visiting the office at night and told the employee to head home.

That worker, who spoke on condition of anonymity because he doesn't want to be associated with Strauss, said he wasn't abused by Strauss and never witnessed misconduct or heard or saw any signs of distress from patients during the few months he worked there, starting in late 1996.

Strauss' behaviour at his private medical office is now part of the ongoing investigation by an outside law firm that also is examining allegations involving the student health centre and Ohio State male athletes from at least 16 sports, including some plaintiffs in three related lawsuits against the school.

Garrett is among the 145 former students who have given the investigators firsthand accounts of alleged sexual misconduct by Strauss between 1979 and 1997.

Strauss killed himself in 2005. His relatives have said they were shocked by the allegations.

The school has urged anyone with information about him to contact the investigators from Seattle-based Perkins Coie, which isn't proactively contacting possible victims because of concern for potentially re-traumatizing them.

Some of Strauss' accusers claim Ohio State officials didn't properly respond to concerns raised throughout his two decades there. The university has said that is a key part of the investigation and the school is committed to uncovering the truth.

It documented at least one complaint before Strauss retired from the university in 1998. A student health centre director said a student's report about being inappropriately touched by Strauss during an exam in 1995 was the first such complaint he'd received.

That was a year before Strauss launched his off-campus clinic, which was open for less than two years.