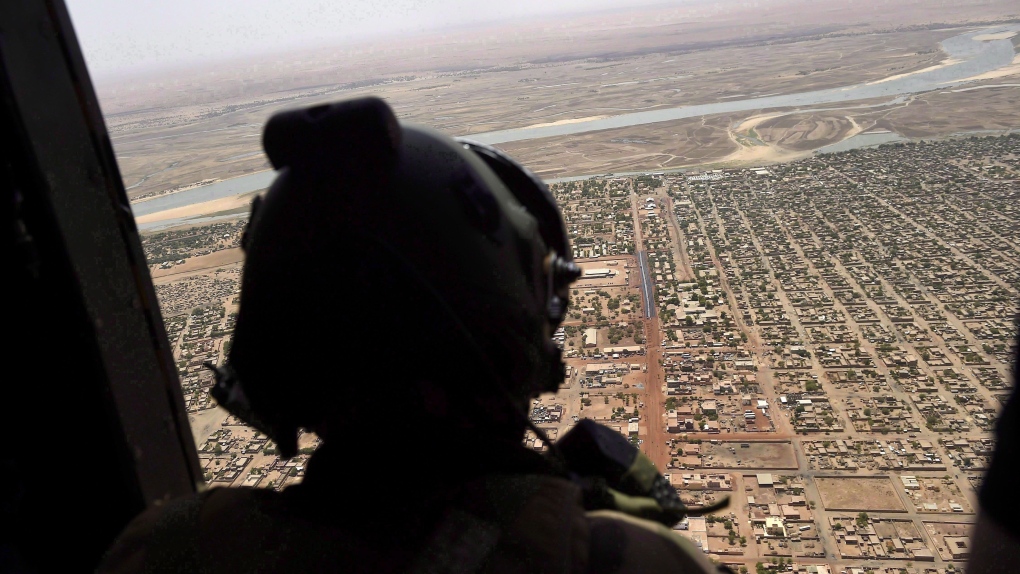 A French soldier stands inside a military helicopter in this May 2017 file image. THE CANADIAN PRESS/AP-Christophe Petit Tesson, POOL

There was no immediate claim of responsibility for the attack on the ethnic Dogon village, though tensions have been high since an ethnic Dogon militia was accused of carrying out a massacre in an ethnic Peuhl village in March that left at least 157 dead.

The killings highlight the Malian security forces' inability to contain the spreading extremism by fighters linked to the Islamic State organization and al-Qaida and the growing danger of frightened communities arming themselves.

Nineteen people were missing after the Dogon village of Sobame Da was attacked around 3 a.m. on Monday, said Interior Security ministry spokesman Amadou Sangho. Homes were burned and animals slaughtered, the government said. The village is in the commune of Sangha, the heart of the Dogon militia blamed for the March attack that has been the deadliest so far.

Some Peuhl leaders had vowed to carry out reprisal attacks for the March bloodshed that was blamed on the Dogon militia known as Dan Na Ambassagou. Militia leader Youssouf Toloba has denied his fighters were involved.

On Monday a prominent group representing the Peuhl community, Tabital Pulaaku, issued a statement blaming the "cycle of violence" on the absence of state authority and impunity for perpetrators of attacks.

"The insecurity and the large-scale massacres exploited by terrorist groups are the seeds of a total and lasting destabilization of the region," the statement said.

Mali has long battled Islamic extremism in its far north, with a French-led military intervention dispersing jihadists from the region's major towns. The extremists have infiltrated communities much further south in recent years, stoking animosity between ethnic groups in the more populated region.

The Peuhl are accused of working alongside jihadists from the Islamic State of Greater Sahara organization to attack Dogon villages and prevent residents from cultivating their land.

In turn, the Peuhl have alleged that the Dogons are collaborating with Mali's military though there is no conclusive sign of state support.

But the groups have not been evenly matched. Human Rights Watch says the Dan Na Ambassagou militia has been behind violence that resulted in much higher death tolls. This is due in part to the sophistication of their weapons.

The latest act of "unspeakable barbarism," however, is a reminder that in this conflict there is no good side and bad side, the head of the United Nations peacekeeping mission, Mahamat Saleh Annadif, said in a statement: "Everyone is responsible."

The violence in central Mali is characterized by "killings, enforced disappearances and burning of villages on an appalling scale," Amnesty International said Monday. The U.N. Security Council's meeting this month on Mali to discuss the renewal of what has become the world's deadliest active U.N. peacekeeping mission should focus on the protection of civilians, the rights group added.

Mali's president has vowed to extinguish the Dan Na Ambassagou militia, though the massacre in March in Ogossagou has led some once-demobilized fighters to take up arms again.

Rural bands of hunters have "become paramilitary groups equipped with weapons of war," arguing that they need to defend their communities if Malian security forces can't, Jean-Herve Jezequel with the International Crisis Group wrote after the March massacre.

The tensions go back several years, however, over issues such as land use, he added. "The availability of weapons of war and the pretext of fighting jihadist groups have opened the floodgates to a level of ethnic-based violence that is without precedent in the region."

The victims have included women and young children, and observers say hundreds of civilians were killed last year alone.

In a report late last month, the UN secretary-general said that Mali's government must address the arming of ethnic self-defence groups and the proliferation of arms in central Mali or "there is a high risk of further escalation."

The unrest in central Mali has displaced some 60,000 people, Secretary-General Antonio Guterres wrote, adding that he was "appalled" by the surge in violence and its effect on civilians.