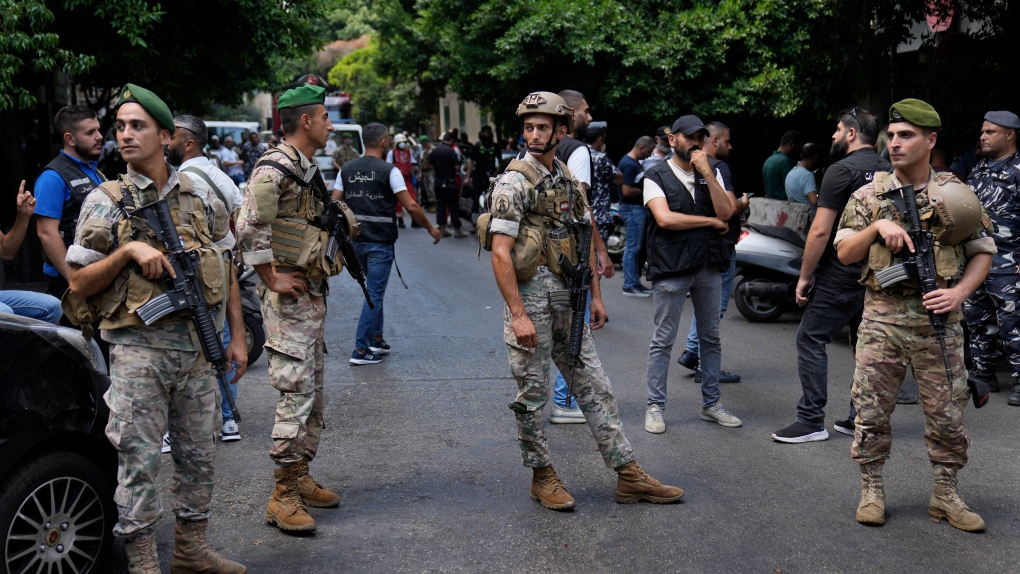 Lebanon's state prosecutor on Tuesday released a man who took up to 10 people hostage in a bank at gunpoint while demanding funds from his locked savings account.

In a case that has drawn nationwide attention, food delivery driver Bassam al-Sheikh Hussein, 42, fired three warning shots from a shotgun last Thursday at a Federal Bank branch in Beirut. He threatened to douse himself with gasoline and set himself ablaze if the bank didn't let him withdraw his US$210,000 in savings for his father's medical bills and other expenses.

Hussein was released from custody after he went on a hunger strike and the bank dropped charges against him.

Hussein had locked himself in the bank and held up to 10 people hostage for about seven hours. Dozens of protesters gathered around the bank to support him, while soldiers and riot police cordoned off the area. No one was injured.

Lebanon's cash-strapped banks since 2019 have imposed strict limits on withdrawals of foreign currency, tying up the savings of millions of people. About three-quarters of the population have slipped into poverty, as the tiny Mediterranean country's economy continues to spiral.

After hours of negotiations, Hussein and officers agreed that the bank would release $35,000 of his savings, while he and his brother would be briefly questioned at the Internal Security Forces headquarters in the Lebanese capital. Hussein's lawyers said his family had received the money.

The bank's lawyer declined to talk about the details of the settlement reached with Hussein allowing him to withdraw some of his savings last week.

Hussein had been held in pre-trial detention after Federal Bank pressed charges. Judicial officials told the AP that Hussein was detained because he took people hostage and threatened people with weapons.

Hussein's brother Atef said Hussein went on a hunger strike to protest the turn of events. Bassam is now at home and "exhausted," his brother told the AP.

A photo of Hussein with his bed-ridden father surfaced on social media moments after arriving home.

A small group of protesters had gathered outside the courthouse earlier Tuesday, temporarily closing off the main road to traffic. They chanted slogans calling for Hussein's release.

In the court decision obtained by the AP, state prosecutor Ghassan Ouweidat said Federal Bank had dropped its charges against Hussein, and that the gunman was free to go. However, Hussein had to register his address and is subject to being summoned for further questioning.

A person close to the case said there may be a temporary travel ban as well.

The state has yet to drop its charges against Hussein, whose actions could land him up to two years in jail.

Fouad Debs, a lawyer with legal and advocacy group the Depositors' Union and one of Hussein's representatives, said Federal Bank did not fulfill its obligations to allow Hussein to withdraw up to $400 monthly under Lebanon's central bank guidelines.

"Bassam has been asking for it for the past four months," Debs said.

Hussein has been hailed as a hero by many in the country and observers have speculated the incident may inspire copycats.

In January, a coffee shop owner withdrew $50,000 locked in a bank in eastern Lebanon after taking employees hostage and threatening to kill them. He was released two weeks later.

The international community has demanded Lebanon reform its economy and combat rampant corruption. Talks over a bailout with the International Monetary Fund have moved slowly as parliament prepares legislation demanded by the IMF, including laws on capital controls and those targeting money laundering.

Tom Mulcair: An election that affects us all

State of emergency declared in northern N.S., thousands still without power on P.E.I.

More than 16,000 customers in Nova Scotia and Prince Edward Island are still without electricity 12 days after post-tropical storm Fiona hit the Maritimes on Sept. 23. The ongoing outages and restoration efforts have prompted the Nova Scotia government to declare a state of emergency in several counties in northern Nova Scotia.