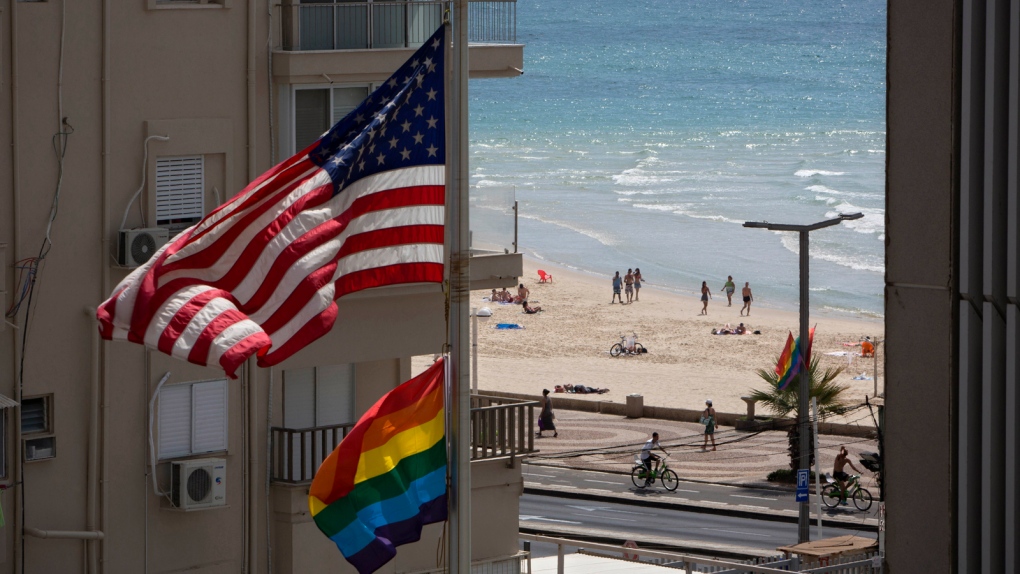 A U.S. flag is raised alongside a pride flag on the U.S. Embassy a day before the Gay Pride Parade in Tel Aviv, Israel, Thursday, June 12, 2014. (AP / Oded Balilty, File)

WARSAW, Poland -- U.S. President Barack Obama has taken the U.S. gay rights revolution global, using American embassies across the world to promote a cause that still divides his own country.

Sometimes U.S. advice and encouragement is condemned as unacceptable meddling. And sometimes it can seem to backfire, increasing the pressure on those it is meant to help.

With gay pride parades taking place in many cities across the world this weekend, the U.S. role will be more visible than ever. Diplomats will take part in parades and some embassies will fly the rainbow flag along with the Stars and Stripes.

The United States sent five openly gay ambassadors abroad last year, with a sixth nominee, to Vietnam, now awaiting Senate confirmation. American diplomats are working to support gay rights in countries such as Poland, where prejudice remains deep, and to oppose violence and other abuse in countries like Nigeria and Russia, where gays face life-threatening risks.

"It is incredible. I am amazed by what the U.S. is doing to help us," said Mariusz Kurc, the editor of a Polish gay advocacy magazine, Replika, which has received some U.S. funding and other help. "We are used to struggling and not finding any support."

Former President George W. Bush supported AIDS prevention efforts globally, but it was the Obama administration that launched the push to make lesbian, gay, bisexual and transgender rights an international issue. The watershed moment came in December 2011, when then-Secretary of State Hillary Clinton went to the United Nations in Geneva and proclaimed LGBT rights "one of the remaining human rights challenges of our time."

Since then, embassies have been opening their doors to gay rights activists, hosting events and supporting local advocacy work. The State Department has since spent $12 million on the efforts in over 50 countries through the Global Equality Fund, an initiative launched to fund the new work.

One beneficiary was Jake Lees, a 27-year-old Englishman who had been forced to spend long periods apart from his American partner, Austin Armacost, since they met six years ago. In May Lees was issued a fiance visa at the U.S. Embassy in London. The couple married two weeks ago and are now starting a new life together in Franklin, Indiana, as they wait for Lees' green card.

"I felt like the officers at the embassy treated us the way they would treat a heterosexual couple," said Armacost, a 26-year-old fitness and nutrition instructor. "It's a mind-boggling change after gay couples were treated like legal strangers for the first three centuries of our country's history."

Some conservative American groups are outraged by the policy. Brian Brown, president of the National Organization for Marriage, calls it "a slap in the face to the majority of Americans," given that American voters have rejected same-sex marriage in a number of state referendums.

"This is taking a flawed view of what it means to be a human being -- male and female -- and trying to impose that on countries throughout the world," Brown said. "The administration would like people to believe that this is simply 'live and let live.' No, this is coercion in its worst possible form."

The American efforts are tailored to local conditions, said Scott Busby, the deputy assistant secretary for the Bureau of Democracy, Human Rights, and Labor at the State Department. Ambassadors can decide individually whether to hoist the rainbow flag, as embassies in Tel Aviv, London and Prague have done, or show support in other ways.

While some gay rights activists say support from the U.S. and other Western countries adds moral legitimacy to their cause, it can also cause a backlash.

Rauda Morcos, a prominent Palestinian lesbian activist, said local communities, particularly in the Middle East, have to find their own ways of asserting themselves. She criticized the U.S. and Western efforts in general to help gay communities elsewhere as patronizing.

"It is a colonial approach," she said. "In cases where it was tried, it didn't help local communities and maybe made things even worse."

An extreme case has been Uganda, which in February passed a law making gay sex punishable by a life sentence. In enacting the bill, President Yoweri Museveni said he wanted to deter the West from "promoting" gay rights in Africa, a continent where homosexuals face severe discrimination and even attacks. In response, the U.S. imposed sanctions and Secretary of State John Kerry compared the policies to the anti-Semitic laws in Nazi Germany and apartheid in South Africa.

In Russia, President Vladimir Putin has waged an assault on what he considers the encroachment of decadent Western values and the government last year banned "propaganda of nontraditional sexual relations among minors," making it a crime to hold gay rights rallies or to openly discuss homosexuality in content accessible to children. Afraid for their security, some Russian gay advocates try to keep their contacts with Western officials quiet.

The official U.S. delegation to the recent Winter Olympics in Russia included three openly gay athletes. Soon after that the U.S. Embassy in Moscow opened its basketball court for the Open Games, an LGBT sporting event which had been denied access to many of the venues it had counted on. The U.S. Embassy also operates a website where Russian gay and lesbians can publish their personal stories.

Jessica Stern, executive director of the International Gay and Lesbian Human Rights Commission, praised the U.S. policy but said there have been missteps along the way, citing a 2011 U.S. embassy gathering in Pakistan that prompted a group of religious and political leaders to accuse the U.S. of "cultural terrorism."

And in Senegal a year ago, President Macky Sall bluntly rebuked the visiting Obama for urging African leaders to end discrimination against gays. Sall said his country was neither homophobic nor ready to legalize homosexuality, and in an apparent jab at the U.S., he noted Senegal abolished capital punishment years ago.

"The response in the local press was voluminous praise of the Senegalese president, maybe not actually for his stance on LGBT rights, but for effectively asserting Senegal's sovereignty, yet the two became intertwined," Stern said.

Busby, the State Department official, denied that increased harassment by governments is ever the consequence of U.S. advocacy, instead describing it as "a cynical reaction taken by leaders to advance their own political standing."

In some countries, like Poland, the U.S. efforts are a catalyst for change.

The embassy there financed a 2012 visit to Warsaw by Dennis and Judy Shepard, the parents of Matthew Shepard, a gay Wyoming college student who was tortured and murdered in 1998.

A group of parents who heard their story were so shaken by the Shepards' tragedy that they founded a parental advocacy group, Akceptacja, which is fighting homophobia. The parents are now reaching out to their lawmakers personally, in what advocates say is the conscious adoption of an American strategy of families of gays and lesbians appealing to the hearts of officials.

"The killing of Matthew Shepard represents the fear I have that my son could be hurt for being gay," said Tamara Uliasz, 60, one of the group's founders. "I realized that what happened in Wyoming could happen here."