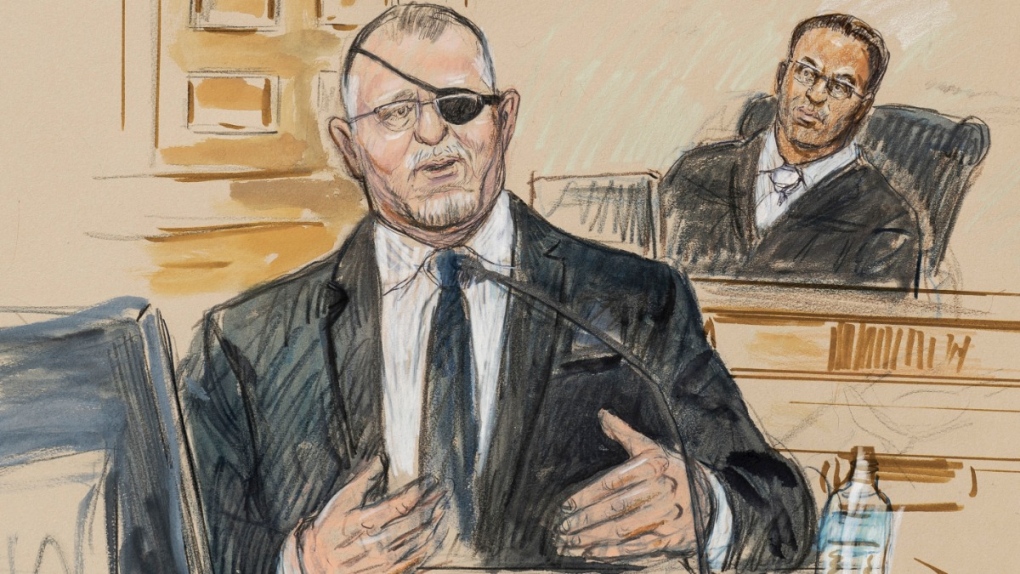 This artist sketch depicts the trial of Oath Keepers leader Stewart Rhodes, left, as he testifies on Nov. 7, 2022. (Dana Verkouteren via AP, File)

A Washington, DC, jury on Tuesday convicted Oath Keepers leader Stewart Rhodes and associate Kelly Meggs of seditious conspiracy for their role around the January 6, 2021, attack on the US Capitol.

While the jury split on a number of other charges brought against the five alleged members of the right-wing militia group, even two guilty verdicts on the seditious conspiracy charge marked a significant win for the U.S. Justice Department and was hailed as vindication by the House select committee investigating the insurrection. The historic criminal trial -- the first of three seditious conspiracy cases set to start this year -- was a major test of the department's ability to hold January 6 rioters accountable.

The charge has rarely been brought in the century and a half that the statute and its forerunners have been on the books. By using it against members of the Oath Keepers the department is expressing that it sees the breach of the Capitol as a grave threat to the operation of the U.S. government.

Prosecutors had argued that the attack on the U.S. Capitol was more than just a political protest that got out of control, but rather a violent attack on the seat of American democracy and an effort to keep Joe Biden out of the Oval Office by any means necessary.

"The FBI will always uphold the rights of all citizens who peacefully engage in First Amendment protected activities, but we and our partners will continue to hold accountable those who engaged in illegal acts regarding the January 6, 2021, siege on the U.S. Capitol," FBI Director Christopher Wray said in a statement Tuesday.

Jurors considered 10 charges against the five defendants, including three conspiracy charges, obstructing the certification of the electoral college vote and tampering with documents. The defendants were convicted on multiple charges, and all five were found guilty of obstructing an official proceeding. The charge, like the seditious conspiracy charge, carries a 20-year maximum prison sentence.

It remains to be seen how much time each defendant will serve, as Judge Amit Mehta could issue a sentence that exceeds 20 years or decide to sentence them to far less than the allowed maximum.

Mehta said in court that four of the defendants, including Rhodes, will remain behind bars. Only one defendant -- Caldwell -- had been on pretrial release.

Sentencing hearings typically occur 90 days after a verdict is reached.

Lawyers for the defendants said they were disappointed in the verdict but believed their clients had received a fair trial.

"I do believe that they gave us a fair trial," James Lee Bright, an attorney for Rhodes, told reporters outside the courthouse. Bright added, however, that he believed the verdict "could have been substantially different" if the trial had been moved outside of Washington, DC.

As the verdict was being read in the federal courtroom, the five defendants expressed little emotion. Rhodes, who founded the Oath Keepers in 2009 and has led the group ever since, had his head down, writing notes to one of his attorneys.

Members of the prosecution congratulated each other after the jury had left, but declined to commented on the verdict. They said the 57-year-old Rhodes had stood outside the Capitol on January 6 acting like a "general" as his followers breached the building.

Meggs, 53, is a leader of the Oath Keepers' Florida chapter and, according to the government, led the infamous "stack" formation of Oath Keepers inside the Capitol on January 6. Harrelson, 41, allegedly acted as Meggs' right-hand man on the day of the attack.

Watkins led her own militia in Ohio before joining the Oath Keepers in the wake of the 2020 election. Prosecutors say the 40-year-old, who is transgender, allegedly entered the Capitol with Harrelson and Meggs and coordinated with Caldwell in the weeks prior to the attack.

Caldwell, a 68-year-old who testified that he is not a member of the Oath Keepers, allegedly helped organize the armed quick reaction force stationed outside of Washington on January 6. He also hosted Oath Keepers at his Virginia farm, prosecutors said, and communicated with Watkins during the riot.

The trial began more than seven weeks ago and featured hundreds of messages, audio recordings and videos of the defendants' revolutionary rhetoric in the wake of Biden's 2020 presidential victory and of their actions as they moved across the Capitol grounds during the riot.

Defence attorneys argued that that there was no uniformed plan among the group, that the far-right Oath Keepers militia group only attended the "Stop the Steal rally" on the day of the riot to provide security details for speakers, and that the inflammatory recordings of the defendants were nothing more than "locker room talk."

Here's a breakdown of the jury verdicts:

All five defendants were accused of planning to use force to stop the lawful transfer of presidential power on January 6.

All the defendants faced charges alleging that they conspired together to stop Congress from certifying the Electoral College votes inside the Capitol.

In addition to being accused of conspiring to obstruct an official proceeding, all were found guilty of actually committing the act.

COUNT 4: Conspiracy to prevent an officer from discharging any duties

The indictment alleged that all five defendants worked together to "prevent by force, intimidation, and threat... Members of the United States Congress, from discharging any duties," namely, certifying the results of the 2020 election.

COUNT 5: Destruction of Government Property and Aiding and Abetting

Meggs, Harrelson and Watkins, according to prosecutors, were part of a crowd that burst through the Capitol's Rotunda doors on January 6.

Jurors considered whether Watkins interfered with law enforcement when she allegedly joined a crowd near the Senate chamber, pushed against and shouted at officers who were guarding the chamber doors.

Rhodes, Meggs, Harrelson and Caldwell all faced charges for allegedly deleting messages and pictures from their phones or social media accounts after January 6. Prosecutors also alleged that Rhodes instructed other Oath Keepers to delete messages after the riot.