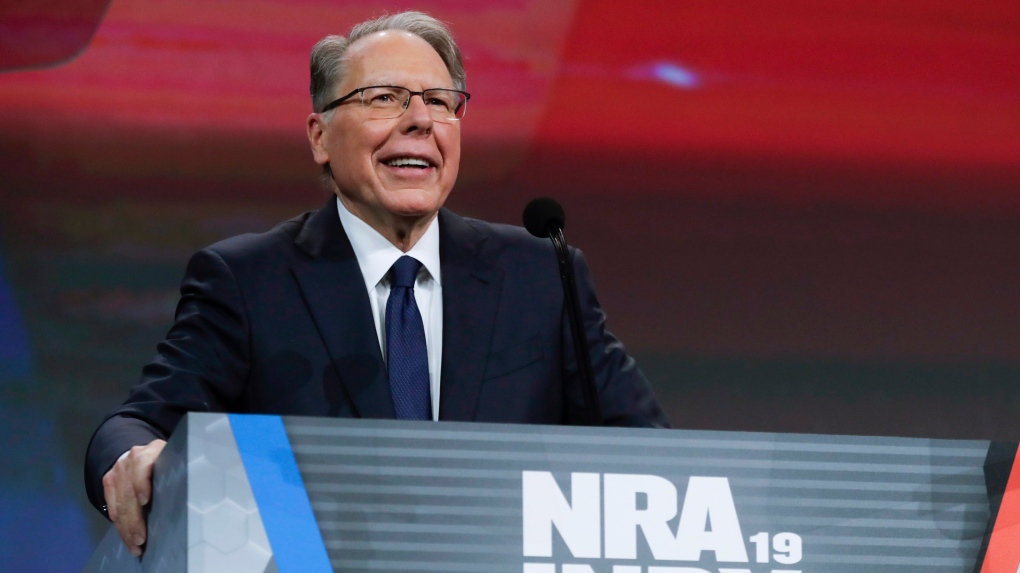 AUSTIN, TEXAS -- The National Rifle Association announced Friday it has filed for bankruptcy protection and will to incorporate the nation's most politically influential gun-rights group in Texas instead of New York, where a state lawsuit is trying to put the organization out of business.

The announcement came months after New York's attorney general sued the NRA, seeking its dissolution over claims that top executives illegally diverted tens of millions of dollars for lavish personal trips, no-show contracts for associates and other questionable expenditures.

The NRA filed for Chapter 11 bankruptcy in federal court in Dallas and said it planned to incorporate in Texas, where records show it formed a limited liability corporation, Sea Girt LLC, in November 2020. Sea Girt LLC made a separate bankruptcy filing Friday, listing fewer than $100,000 in liabilities. Sea Girt was the name of a New Jersey firing range where the NRA began holding annual shooting competitions in 1892, according to an NRA website.

In its filing, the NRA said its longtime leader, Executive Vice-President Wayne LaPierre, made the decision to file for bankruptcy protection in consultation with a "special litigation committee" comprised of three NRA officials that was formed in September to oversee its legal strategies. The NRA board voted Jan. 7 to clarify LaPierre's employment agreement, giving him the power to "reorganize or restructure the affairs" of the organization.

"The move will enable long-term, sustainable growth and ensure the NRA's continued success as the nation's leading advocate for constitutional freedom -- free from the toxic political environment of New York," the NRA said in a statement.

In an interview, NRA board member Charles Cotton made clear that the bankruptcy filing was motivated by litigation and regulatory scrutiny in what he called "corrupt New York" -- not financial concerns.

"We've got to get in a state where we can operate without that kind of undue weaponizing of governmental agencies, and frankly to get all the litigation in a place where we've got an even shake," Cotton told The Associated Press.

A message seeking comment was left with a Dallas lawyer who made the bankruptcy filings on behalf of the NRA and Sea Girt LLC.

Shortly after the announcement, New York Attorney General Letitia James said she would not allow the NRA to "evade accountability" or oversight. Her office's lawsuit last year highlighted misspending and self-dealing claims that have roiled the NRA and LaPierre in recent years -- from hair and makeup for his wife to a $17 million post-employment contract for himself.

Cotton said the allegations in James' lawsuit will be proven false. He said he expects LaPierre to remain at the helm of the reconstituted NRA, praising his popularity with members and proficiency at raising money for the organization.

"Wayne leaving would be a bigger blow to the organization than was the illness and death of Charlton Heston," Cotton said.

The gun-rights group boasts about 5 million members. Though headquartered in Virginia, the NRA was chartered as a non-profit in New York in 1871 and is incorporated in the state. Going forward, the NRA said a committee will study opportunities to relocate segments of its operations to Texas and elsewhere.

In recent years, the NRA's relationship with New York has increasingly soured.

In 2018, the organization sued Gov. Andrew Cuomo, claiming a "political vendetta" was behind a state financial watchdog's investigation into whether it broke state laws by marketing an insurance program to gun owners. In November, the NRA agreed to pay $2.5 million and accepted a five-year ban on marketing insurance in the state.

In response to James' lawsuit, the NRA countersued with claims that her actions were motivated by her hostility toward its political advocacy, including a comment she made while running for attorney general in 2018, saying the NRA is a "terrorist organization" and a "criminal enterprise."

The NRA's largest creditor, owed $1.2 million, is Ackerman McQueen, which is the group's former advertising agency that was behind the now-shuttered NRA TV service. The NRA sued the Oklahoma-based company in 2019, alleging it was being overbilled and said in Friday's bankruptcy filing that the debt it is owed is disputed. The lawsuit is pending. A message seeking comment was left with Ackerman McQueen.

In the New York lawsuit, Ackerman McQueen was accused of aiding lavish spending by LaPierre and other NRA executives by picking up the tab and then sending a lump sum bill to the organization for "out-of-pocket expenses."

"No financial filing can ever shroud the moral bankruptcy of Wayne LaPierre and his wife and their lap dogs on the NRA board," said Bill Powers, an Ackerman McQueen spokesperson and former public affairs director for the NRA.

Court records also show more than $960,000 owed to Membership Marketing Partners LLC, a firm that lists its headquarters at the same address as the NRA. Another $200,000 is owed to Speedway Motorsports, the North Carolina-based company that owns and operates NASCAR tracks, according to the records.

Republican Texas Gov. Greg Abbott quickly welcomed the news, tweeting: "Welcome to Texas -- a state that safeguards the 2nd Amendment." The NRA said it has more than 400,000 members in Texas and plans to hold its annual convention in Houston later this year.