Not real news: A look at what didn't happen this week 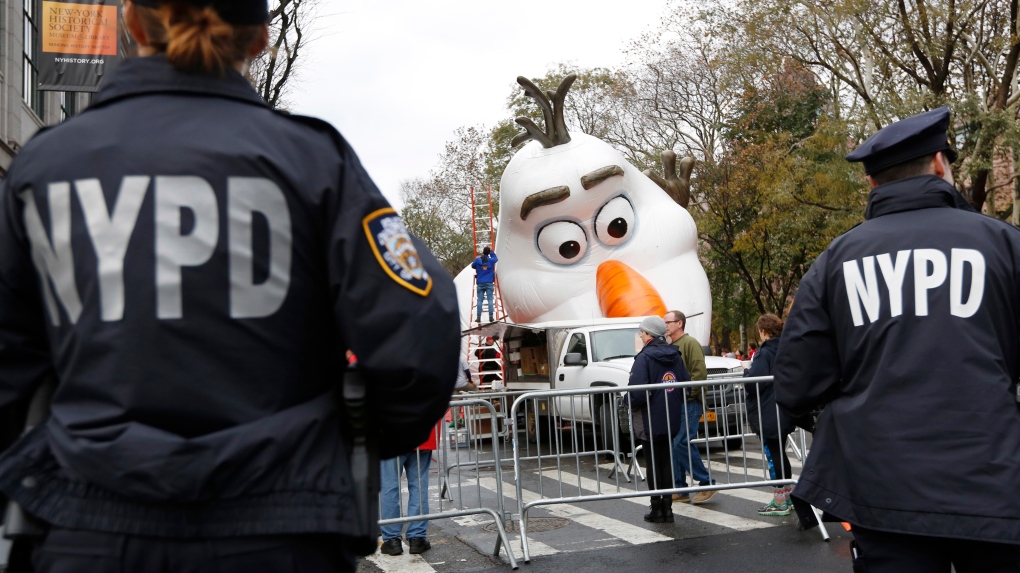 In this Nov. 22, 2017, file photo, police officers stand near the site where a large balloon of Olaf, from the animated film, "Frozen", is being inflated a day before the Thanksgiving Day parade in New York. The AP reported on Dec. 1, 2017, that a story claiming a fighter jet-themed float exploded at the parade was a hoax. (AP Photo/Seth Wenig, File)

A roundup of some of the most popular, but completely untrue, headlines of the week. None of these stories are legit, even though they were shared widely on social media. The Associated Press checked these out; here are the real facts:

THE FACTS: The nation's seniors won't be getting a letter from the Internal Revenue Service granting them a "Christmas stimulus," despite claims of a viral story circulated by hoax site Reagan Was Right. The story, citing an official from the White House director of information and propaganda, claims anyone over 65 who receives Social Security payments and has an annual income under $40,000 would be receiving a stimulus check. The White House has no such office, and the IRS tells the AP it's not aware of any such proposal. The story also is paired with a photo of Trump signing something. The photo shows the signing of an executive order in January on the Dakota Access pipeline, not a stimulus.

THE FACTS: Brown did approve a law in October that lessens criminal penalties for knowingly infecting another person with HIV, but it doesn't allow those with the virus that causes AIDS to donate blood. A story on several websites claims the measure allows "HIV positive people to donate their blood to others." The law states that blood "shall not be donated for transfusion purposes by a person if the person may have reason to believe that he or she has been exposed to HIV or AIDS."

NOT REAL: Slaughterhouse Employee Accused Of Murdering 71 Coworkers Over 17 Years

THE FACTS: Sulpher Springs, Texas, Police Chief Jay Sanders says an article claiming a slaughterhouse in the city is under investigation over the disappearance of dozens of workers is "absolutely not a true story." The tale was first published online by the hoax site World News Daily Report in 2015. The story was circulated again in recent weeks by a different website. The story quotes police as identifying a worker named Jeremiah Burroughs as a suspect. A mug shot included with the story is actually a photo of a man by a different name who pleaded guilty to child pornography charges in Wichita Falls, Texas.

THE FACTS: Canada did legalize medically assisted suicide last year for those with serious illnesses, but the Canadian government's website says children are not eligible. A near-identical story posted on several websites falsely claims Canada allows "parents who want their doctors to kill their sick, disabled or dying children" to turn to euthanasia. The stories were published after a columnist in the conservative National Review suggested that Canada's law could one day lead to children being euthanized.

THE FACTS: The military-themed satire site Duffel Blog posted this story claiming an F-35 fighter jet float levelled an entire city block along Sixth Avenue in Manhattan during the annual New York City parade last week, killing thousands. Not only was there no such explosion, the official lineup of floats and balloons shows Olaf the snowman from Disney's "Frozen," SpongeBob SquarePants and Ronald McDonald, but no fighter jet-themed displays.

This is part of The Associated Press' ongoing effort to fact-check misinformation that is shared widely online, including work with Facebook to identify and reduce the circulation of false stories on the platform.