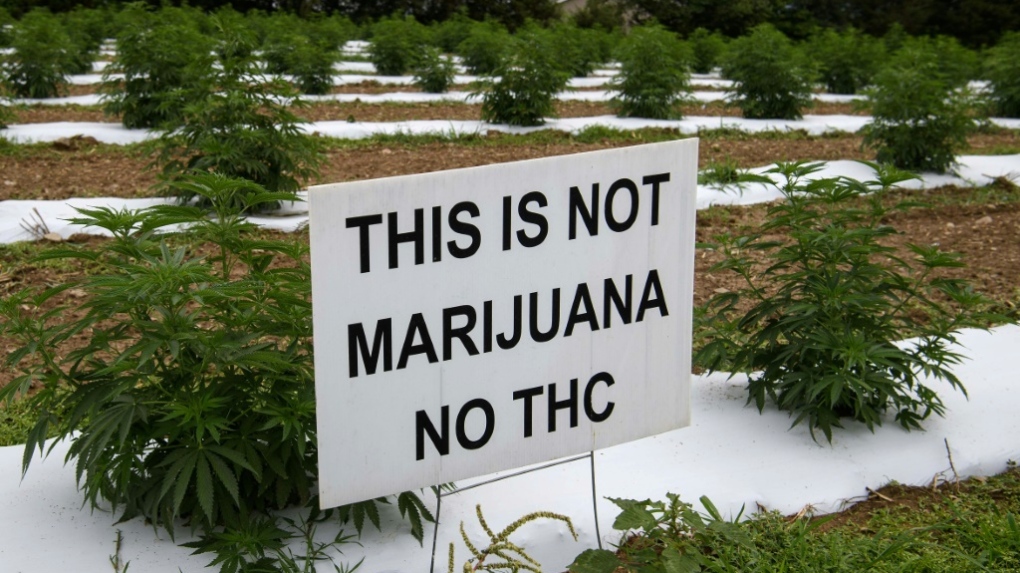 Hemp looks and smells like marijuana but contains very little tetrahydrocannabinol (THC), which is what gets users high. (Nicholas Kamm / AFP)

STANLEY, VA. -- When she planted hemp to make extra money for her family farm, Susan Corbett did not imagine thieves would find their way to her rural plot in Virginia to steal the plants.

And yet they did -- one of many bends in the wild and sometimes bumpy ride hemp farmers have had since the crop was legalized in the United States in 2018.

Two security cameras now watch over a portion of Corbett's crop, which looks and smells like marijuana but contains very little tetrahydrocannabinol (THC), which is what gets users high.

Also warning would-be pilferers is a sign whose bold black letters read: "This is not marijuana."

"I don't know what they were doing with it," Corbett said of her looted plants. "There's no THC in it."

Hemp is in demand for its seeds, fiber and oil containing the relaxing cannabinoid CBD -- but it's also the same plant as marijuana, which remains illegal federally and under varying restrictions in most American states.

Besides an oversaturated market and laborious cultivation process, hemp farmers hoping to profit from the newly legitimized plant say they have had to navigate suspicious police, a legal mandate to burn crops that exceed THC limits and the problem of theft.

"Everybody plants it and goes 'This is wonderful,'" said Corbett. "I said 'Just wait.'"

One of the world's oldest cultivated plants, the U.S. banned hemp during the 20th century before allowing its growing for research starting in 2014, then legalizing it nationwide four years later.

Forty-six states have since passed laws regulating its cultivation, with hemp licenses in 34 states growing 455 per cent last year over 2018, according to Vote Hemp, an advocacy group.

CBD, whether sold as a supplement or mixed into food or drinks, has also grown popular, and financial services firm Canaccord Genuity predicts CBD sales will jump 45 percent to YS$18 billion by 2024.

Those who grow hemp describe a demanding crop that must be harvested by hand, maintained with a rigorous spraying schedule to keep away pests then dried out before it can be sold.

With so much of the plant hitting the market, and a shortage of processors, many farmers are seeing buyers back out of agreements.

"When we go to the CBD market, it's 'We'll pay you when we get paid,' which puts us in a problem with our creditors," said David Turner of DC Hemp, who farms in rural Dinwiddie county, Virginia.

Another peculiarity is the presence of THC in the plant. Farmers must constantly test hemp to ensure the level doesn't get too high, otherwise they have to burn it.

"If I get the wrong situation where I have a crop out there, I'm a drug lord," Turner said.

Local media has reported cases of police around the United States seizing hemp shipments on suspicion of being marijuana, so growers have started carrying around a pile of documentation when transporting their harvest.

And then there are the thieves.

The brigands traipsed into Turner's fields and yanked plants out of the ground repeatedly when he was growing it last year, while at Corbett's farm they chopped off the tops of the plants where the buds grow.

Was it to smoke the plant thinking it's marijuana? Or sell it to unsuspecting buyers? Turner's not sure, but said local police arrested multiple suspects for the thefts.

Farmers say their real challenge is getting their oil sold. Turner and Corbett both are sitting on gallons of CBD oil, waiting for someone to buy it.

"There definitely was a bit of an oversaturation of the market last year, and in conjunction with that market prices have dropped significantly," said Erica Stark, executive director of the National Hemp Association.

"It's still profitable if you can find a buyer, but it's a big if," she said, adding that the market situation will improve once processing capacity for hemp fiber grows, and the government passes regulations on CBD's use as a supplement.

Turner has decided to sit out the 2020 planting season, and Vote Hemp estimates the actual harvest in 2019 was much lower than what farmers were licensed for due to crop failure and non-compliant plants.

"I haven't gotten rich doing it," concedes Corbett, who also rents out land to cattle ranchers and hosts guests at her riverside acreage in the town of Stanley.

"I believe in CBD and so, if I do OK this year, I'll probably commit to five more years."