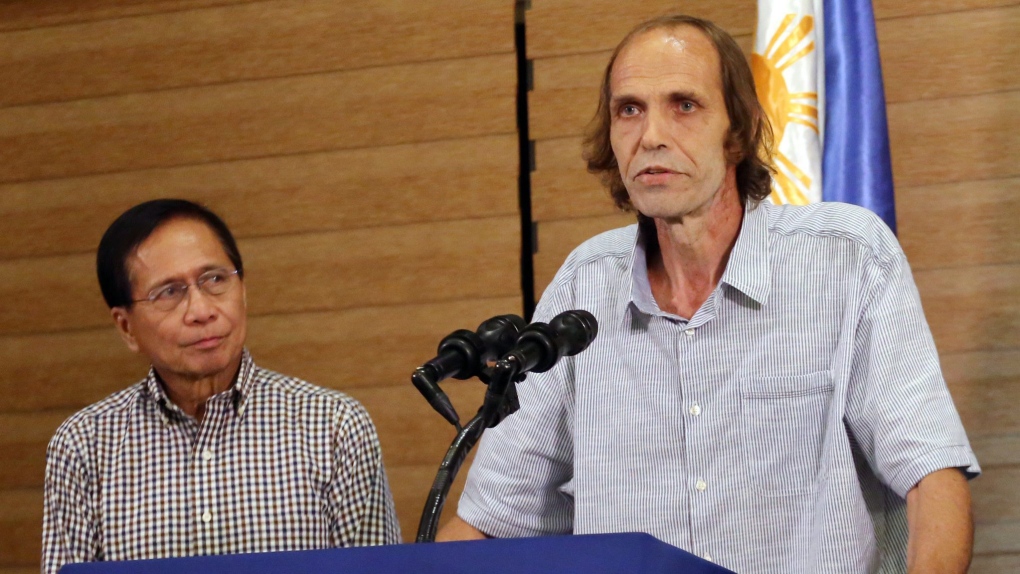 A Norwegian man freed by militants after a year of jungle captivity in the southern Philippines described the ordeal Sunday as "devastating," carrying a backpack with a bullet hole as a reminder of a near-death experience that included the beheadings of the two Canadians kidnapped with him. (Manman Dejeto/AP)

INDANAN, Philippines -- A Norwegian man freed by militants after a year of jungle captivity in the southern Philippines described the ordeal Sunday as "devastating," carrying a backpack with a bullet hole as a reminder of a near-death experience that included the beheadings of the two Canadians kidnapped with him.

Kjartan Sekkingstad was freed by his Abu Sayyaf captors on Saturday to rebels from the larger Moro National Liberation Front, which has signed a peace deal with the Philippine government and helped negotiate his release. On Sunday, he was handed over to Philippine authorities, along with three Indonesian fishermen freed separately by the Abu Sayyaf.

Aside from the horror of constantly being warned he would be the next to be beheaded by the brutal extremists, Sekkingstad said he survived more than a dozen clashes between Philippine forces and his captors in the lush jungles of Sulu province.

In one intense battle, in which the forces opened fire from assault helicopters and from the ground, he said he felt a thud in his back and thought he was hit by gunfire. After the fighting eased, he discovered that he wasn't hit, and that his green, army-style backpack had been pierced by the gunfire instead.

Sekkingstad was carrying the damaged backpack when he walked to freedom Saturday somewhere in the thick jungle off Sulu's mountainous Patikul town.

On Sunday, the heavily bearded Sekkingstad, clad in a rebel camouflage uniform and muddy combat boots, was asked how he would describe his horrific experience.

Philippine presidential adviser Jesus Dureza, who received Sekkingstad and the three freed Indonesians from Moro National Liberation Front rebel chief Nur Misuari in Misuari's rural stronghold near Sulu's Indanan town, accompanied the Norwegian on a flight to the southern city of Davao, where the ex-hostage was to meet President Rodrigo Duterte.

Sekkingstad was kidnapped from a yacht club he helped managed on southern Samal Island on Sept. 21, 2015, along with Canadians John Ridsdel and Robert Hall and Hall's Filipino girlfriend, Marites Flor, sparking a massive land and sea search by Philippine forces.

The Abu Sayyaf demanded a huge ransom for the release of the foreigners, and released videos in which they threatened the captives in a jungle clearing where they displayed Islamic State group-style black flags.

Ridsdel was beheaded in April and Hall was decapitated in June after ransom deadlines lapsed. When Flor was freed in June, she recounted in horror how the militants rejoiced while watching the beheadings.

Sekkingstad said he and his fellow captives were forced to carry the militants' belongings and were kept in the dark on what was happening around them. At one point, he said, their heavily armed captors numbered more than 300.

After the militants decapitated Ridsdel, Sekkingstad was threatened by the militants, who repeatedly told him, "You're next."

When the negotiations for his release began in recent months, Sekkingstad said the rebels began treating him better.

It was not immediately clear whether Sekkingstad had been ransomed off. Duterte suggested at a news conference last month that 50 million pesos ($1 million) had been paid to the militants, but that they continued to hold on to him. The military said Saturday that relentless assaults forced the extremists to release the hostage.

In Norway, Prime Minister Erna Solberg confirmed that Sekkingstad had been "brought to safety" after his release.

Solberg said the Norwegian Foreign Ministry, police and diplomats "have done a great deal of work" to have Sekkingstad released, and thanked Duterte and Dureza.

In a statement posted on the Norwegian government website, Solberg said Norway supports the Philippines "in their fight against terrorism and for peaceful outcome in the south" of the country. Solberg told national news agency NTB that "Norwegian officials had not participated in any payment of ransom or made any concessions in the matter."

Philippine forces launched a major offensive against the Abu Sayyaf after the beheadings of the Canadians sparked condemnations from then-Philippine President Benigno Aquino III and Canadian Prime Minister Justin Trudeau, who called on other nations not to pay ransoms if their citizens are abducted to discourage the militants from carrying out more kidnappings.

The three Indonesian fishermen freed by the Abu Sayyaf were kidnapped in July off Lahad Datu district in Malaysia's Sabah state, according to regional Philippine military spokesman Maj. Filemon Tan. Their release came as Indonesian Defence Minister Ryamizard Ryacudu was visiting the Philippines to meet with his Philippine counterpart and top military commanders.

The Abu Sayyaf has been blacklisted as a terrorist organization by the U.S. and the Philippines for deadly bombings, kidnappings and beheadings. Without any known foreign funding, the extremists have relied on ransom kidnappings, extortion and other acts of banditry, and some commanders have pledged loyalty to the Islamic State group partly in the hope of obtaining funds.