Northern Italian politicians vow not to shelter any more migrants 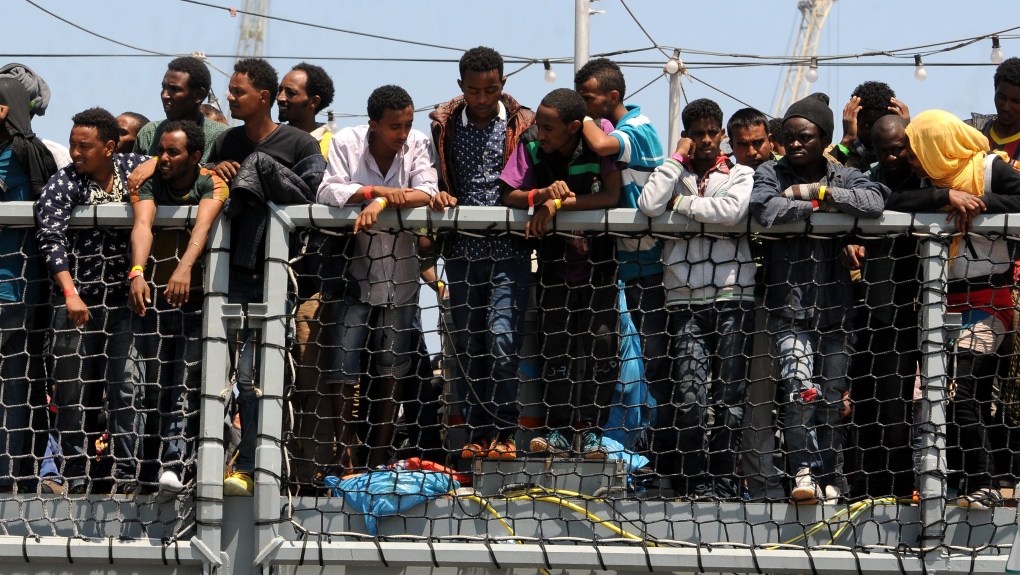 Migrants wait to disembark from the German Navy ship Hessen at the Palermo harbor, Italy on June 7, 2015. European rescue boats are bringing thousands of migrants saved at sea to Italian ports, prompting center-right politicians to vow that their regions won't shelter any more of them. (AP / Alessandro Fucarini)

ROME -- Heartened by recent election successes by an anti-immigrant party, Italian politicians based in the north vowed Sunday not to shelter any more migrants saved at sea, even as thousands more were being rescued in the Mediterranean from smugglers' boats in distress.

Elsewhere in the country, however, corruptions investigations have revealed that some local officials gleefully see a cash cow in the shelters.

Over the weekend, nearly 6,000 migrants were rescued by an array of European military vessels, including 2,371 who were saved on Sunday from 15 boats that ran into difficulty shortly after smugglers set off with them from Libyan shores, the Italian coast guard said.

Two German military ships brought a total of some 1,400 people to Sicilian ports Sunday, a day after they were rescued.

Mayors of Sicilian and other southern towns have warned for months they've run out of room for migrants, and thousands of the rescued are being resettled in shelters in central and northern Italy while their asylum requests are processed. The migrants flee poverty, persecution and war in Africa, the Middle East and Asia.

Among the north-based Italian politicians refusing to accept more migrants Sunday was newly-elected Liguria Gov. Giovanni Toti. Toti's candidacy was backed by his mentor, former centre-right Premier Silvio Berlusconi, and by the anti-immigrant Northern League party, which was bolstered by results in balloting for governorships a week ago.

In Lombardy, whose capital is Milan, longtime League leader, Gov. Roberto Maroni, asked followers on Twitter if they agreed with him that "Lombardy mayors must refuse to welcome clandestine migrants" sent by the national government or else face regional funding cuts as punishment.

Fueling pledges to welcome no more migrants in their regions was a warning Saturday from Britain's defence secretary, Michael Fallon, that hundreds of thousands of migrants might be in Libya, poised to attempt the perilous sea crossing over the summer months.

An U.N. refugee agency official, Carlotta Sami, called such figures speculation. But Northern League leader Matteo Salvini cited the huge figure when he spoke about "an alarm" of a flood of migrants.

Also pledging his region won't accept more rescued migrants was Veneto Gov. Luca Zaia, a Northern League proponent who scored a resounding victory for a second term in the May 31 vote. "First of all, we must do away with the illusion that we can support and manage a biblical exodus," he said in an interview in Corriere della Sera daily Sunday.

Zaia contended his northeastern Veneto region, home to many family-run or medium-sized businesses, had no more room for migrants.

While these politicians in the north were saying no to more migrants, corruptions investigations have showed that other Italian politicians and local officials see the shelters as a way to make money.

Last week, 44 people, including local politicians from the centre-left to the centre-right in the Rome area, were arrested for investigation of alleged corruption or tampering with public contract bidding. The Rome-based probe, which netted dozens of arrests a few months ago in an earlier chapter, examined public contracts for social services, including for asylum-seekers at a migrant centre in Sicily.

In intercepted phone calls, one suspect was heard referring to migrant shelters as a "cow to milk" for money.

Rome daily La Repubblica on Sunday reported that prosecutors in Florence, the Tuscan capital, and in Bari and Catania in the south were also scrutinizing contracts for feeding and sheltering migrants. It put costs this year at more than 1 billion euros ($1.1 billion), about 40 per cent more than was spent last year, when Italy rescued 170,000 migrants from smugglers' boats in the waters off Libya.

Most of the migrants want to reach family or other support networks in northern Europe. They are supposed to stay in Italy until asylum applications are evaluated, although thousands slip away from the shelters and make their way to Germany, Sweden, the Netherlands and elsewhere.