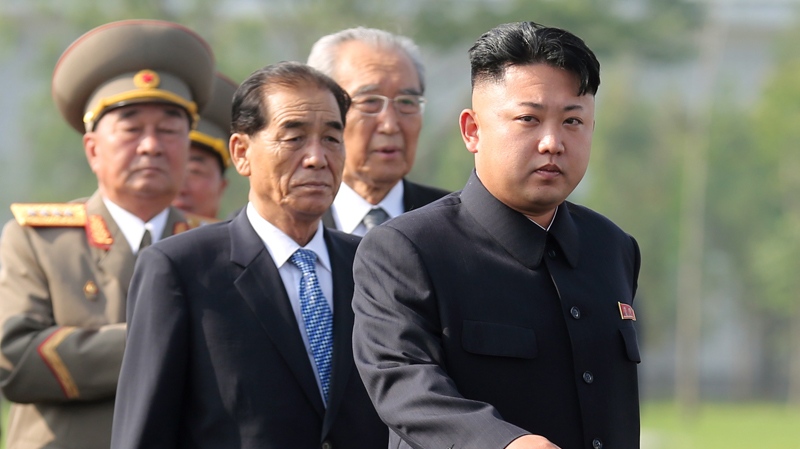 North Korean leader Kim Jong Un, right, arrives at the cemeteries of fallen fighters of the Korean People's Army (KPA) on Thursday, July 25, 2013 in Pyongyang, North Korea as part of ceremonies marking the 60th anniversary of the signing of the armistice that ended hostilities on the Korean peninsula. (AP Photo/ Wong Maye-E)

PYONGYANG, North Korea -- Two decorated U.S. war veterans who survived one of the worst battles of the Korean War found themselves among former foes at a memorial ceremony Thursday as North Korean leader Kim Jong Un launched the country's commemoration of the war's end 60 years ago.

It's unusual for American veterans to attend official events surrounding the July 27 war anniversary in North Korea, called "Victory Day" here. The veterans are in North Korea on a mission to find the remains of a fellow aviator killed in the war, and were given little notice about the event.

The ribbon-cutting ceremony to unveil a new cemetery for war veterans was brief and solemn, with no speeches. Soldiers stood at guard as a military band played the national anthem. Kim, dressed in a dark blue Mao suit, saluted and left a basket of flowers bearing a banner with his name before the memorial.

The Korean War, pitting North Korean and Chinese troops against U.S.-led United Nations and South Korean forces, ended with an armistice on July 27, 1953. A peace treaty was never signed, leaving the Korean Peninsula in a technical state of war and divided at the 38th parallel.

That has not stopped the North Koreans from calling July 27 "Victory Day." Brightly colored banners with the words "Victory" and "War Victory" fluttered from buildings across the capital city. The North Korean government is expected to use the anniversary to draw attention to the division of the Korean Peninsula and to rally support for Kim.

Kim took power following the death of his father, Kim Jong Il, in late 2011. As leader, he has overseen two long-range rocket launches and a nuclear test that have drawn international condemnation and tightened U.N. sanctions.

North Koreans have been gearing up for months for the milestone war anniversary. Soldiers were assigned to carry out an extensive renovation of the Korean War museum. Students rehearsed every afternoon for a new war-themed rendition of the "Arirang" mass games song-and-dance performance, which opened Tuesday. And citizens got down on their hands and knees in the lead-up to help lay sod and plant grass as part of a massive greening of Pyongyang.

The anniversary is taking place as North Korea copes with flooding from the seasonal monsoon rains that strike the peninsula every July. Eight people were killed, more than 4,500 homes destroyed and 17,700 left homeless this week, according to the official Korean Central News Agency.

And in a reminder of the tensions that still roil the divided peninsula, Pyongyang on Thursday threatened to reposition troops at a stalled inter-Korean factory park at a North Korean border town. The warning, which Pyongyang has made before, came after failed talks to reopen the factory park that was a rare symbol of co-operation between the rivals before it was shuttered in April amid tension.

Scores of foreign visitors have arrived in Pyongyang this week, including a planeload of journalists from the U.S., Japan, China, Russia and elsewhere. China's vice-president, Li Yuanchao, arrived Thursday.

The two Americans, retired U.S. Navy Capt. Thomas Hudner , of Concord, Massachusetts, and Dick Bonelli, a former U.S. Marine from Englewood, Florida, are in North Korea on a mission to revisit Jangjin County, better known to Americans as the Chosin Reservoir -- site of one of the deadliest battles of the Korean War.

"It's a very emotional occasion to be here with so many veterans -- not only the veterans but also the people of the nation who turned out to show their support to all of veterans," said Hudner, who received the Medal of Honor for trying to save his downed wingman, Ensign Jesse Brown, at the Chosin Reservoir in 1950.

"And as an American veteran, I am delighted to see that our former foe and we share some of the same feelings about this," Hudner said.

The monument to veterans is the centerpiece of a sprawling national military cemetery in Pyongyang's outskirts.

One North Korean, Pak Chun Son, sobbed as she paid her respects at the gravestone of her father, Pak Hyon Jong, who died in the war when she was 5.

"My father will be honoured on this hill forever," said her brother, Pak Yun Yong, who was 8 when his father died. He was dressed in a military uniform weighed down by medals. Tears sprang to his eyes. "We want to raise our children to be patriots like their grandfather was."

Commemorations also are taking place in South Korea and the United States.

South Korean President Park Geun-hye attended a memorial event Tuesday in the southern city of Busan to pay her respects to the troops who defended South Korea during the war.

U.S. President Barack Obama is to give a speech Saturday at the Korean War Veterans Memorial in Washington.