Hyung-Jin Kim The Associated Press
Published Thursday, May 8, 2014 8:04AM EDT 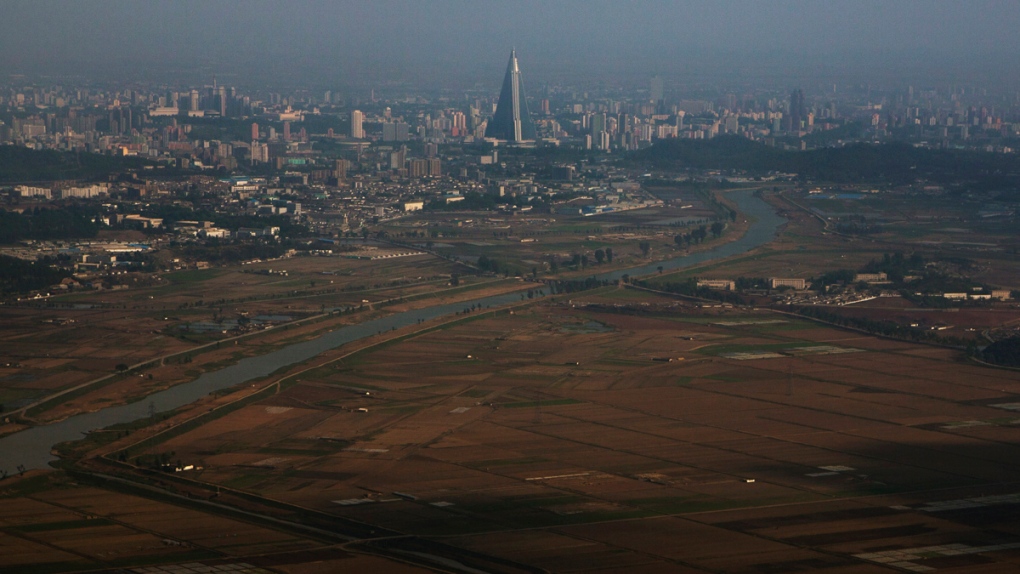 North Korea's capital Pyongyang, viewed from a window of an Air Koryo flight arriving from Beijing, stands on the horizon on Thursday, May 8, 2014. (AP Photo/David Guttenfelder)

SEOUL, South Korea -- North Korea is making final preparations to conduct its fourth nuclear test, South Korea's defence minister said Thursday, but he added that it could be a bluff.

Defence Minister Kim Kwan-jin told South Korean journalists that North Korea is able to detonate a nuclear device at any moment, though he didn't elaborate on what the final step of its preparations would be, according to ministry officials.

Kim also said that although North Korea is ready to conduct a nuclear test, it may not intend to set off the device soon, and instead is trying to trick outside observers into believing a test is imminent, the officials said, requesting anonymity under department rules.

North Korea has threatened in recent weeks to conduct a nuclear test to protest what it calls U.S. and South Korean hostility and international condemnation over its rocket and missile tests earlier this year. South Korea has warned North Korea would face serious consequences if the test is made.

Pyongyang has called for the resumption of long-dormant international aid-for-disarmament talks, but Washington and Seoul say the North must first move toward disarmament. North Korea says it needs nuclear weapons as a deterrent against U.S. military threats.

Many North Korea watchers had suspected a nuclear test would occur when President Barack Obama visited Seoul last month, but nothing happened. Analysts remain divided over whether North Korea will go ahead with a test soon.

A fourth test would mark another defiant response to U.S.-led international pressures on Pyongyang to abandon its nuclear weapons program. North Korea conducted nuclear tests in 2006, 2009 and 2013.

Western experts believe North Korea has a handful of rudimentary bombs, though it's not yet believed to be capable of producing warheads small enough to mount on a long-range missile that could threaten the U.S. Another nuclear test could put the North a step closer to that goal.

Recent months have seen animosities flare up on the Korean Peninsula with Pyongyang conducting a barrage of rocket and missile tests and resuming fierce rhetoric against Seoul and Washington. Before then, the North had been gradually dialing down its threats and seeking improved ties with South Korea in what foreign analysts said was an attempt to lure investment and aid.

On Thursday, Seoul's Defence Ministry announced that a joint investigation by South Korea and the U.S. concluded that three drones found in the South in March and April were flown by North Korea on military surveillance missions. A ministry statement called the drone flights a military provocation and said South Korea will react strongly. North Korea has denied it sent such drones and accused South Korea of plotting a fabrication.

South Korean defence officials said the drones are considered crude and low-tech but that it's the first time North Korean drones have been found crashed in South Korea.

The two Koreas are divided along the world's most heavily armed border since the 1950-53 Korean War ended with an armistice, not a peace treaty. About 28,500 American troops are deployed in South Korea as buttress against potential North Korean aggression.

A year ago, Pyongyang made a torrent of threats to launch nuclear strikes against Seoul and Washington in protest of UN sanctions that were toughened following its third bomb test.