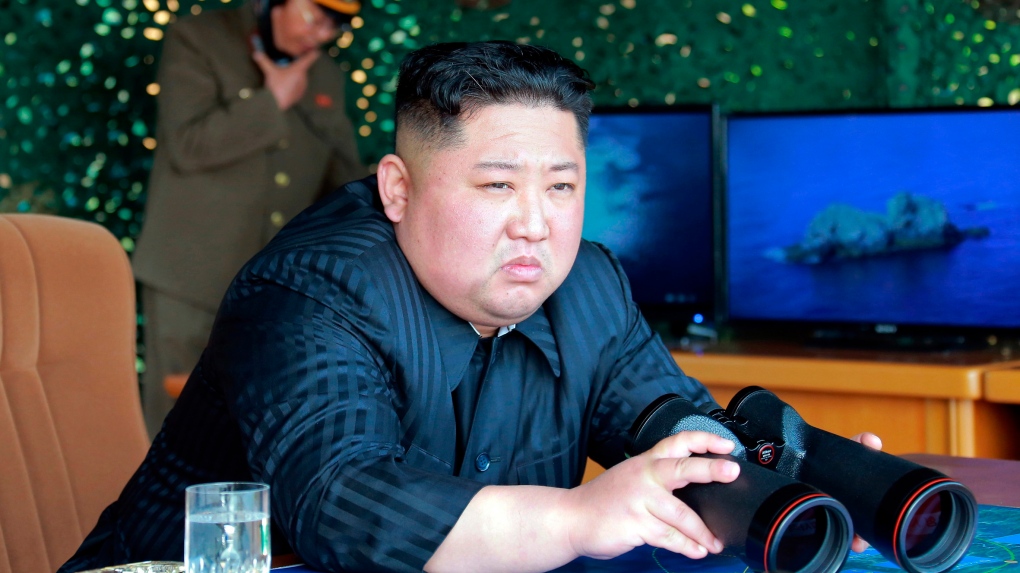 SEOUL, Korea, Republic Of -- North Korea fired two suspected short-range missiles toward the sea on Thursday, South Korean officials said, its second weapons launch in five days and a possible warning that nuclear disarmament talks with Washington could be in danger.

South Korea's Joint Chiefs of Staff said the weapons flew 420 kilometres and 270 kilometres, respectively. It said it is working with the United States to determine more details, such as the types of weapons that were fired. North Korean state media said Friday that leader Kim Jong Un helped guide the firing of the missiles Thursday and learned about "various long-range strike means," but the statement from the propaganda services didn't provide more specifics on the type of missiles fired.

What was launched Thursday is a crucial detail, as North Korea is banned by the United Nations from testing ballistic missiles. Such a test could result in more sanctions, and the North's so far unsuccessful push for large-scale sanctions relief is at the heart of the current diplomatic impasse with Washington.

South Korea's military said earlier that at least one projectile was launched from the Sino-ri area of North Pyongan province, an area known to have one of North Korea's oldest missile bases where a brigade operates mid-range Rodong missiles. It later said there were two launches from the nearby town of Kusong, where North Korea conducted its first successful flight tests of its Hwasong-12 intermediate-range missile and Hwasong-14 intercontinental ballistic missile, both in 2017.

Kusong is also home to missile test facilities that were critical to the development of North Korea's solid-fuel Pukguksong-2, which was successfully flight-tested for the first time in February 2017, in the North's first missile test after President Donald Trump took office.

The latest launches came as U.S. Special Representative for North Korea Stephen Biegun visited South Korea, and hours after the North described its firing of rocket artillery and an apparent short-range ballistic missile on Saturday as a regular and defensive military exercise. North Korea also ridiculed South Korea for criticizing those launches.

President Donald Trump said he was not happy about North Korea's recent military tests. Trump told reporters at the White House on Thursday that "we're looking" at the situation "very seriously right now."

He said the weapons were smaller, short-range missiles, but added: "Nobody's happy about it."

Trump, who has met with Kim twice now, said: "I don't think they're ready to negotiate."

South Korean President Moon Jae-in urged North Korea to refrain from actions that could impede diplomacy. In an interview with the KBS television network, Moon also said Seoul will explore various options to help revive the talks, including providing food aid to the North and pushing for his fourth summit with Kim.

"I want to tell North Korea once again that it's not ideal to repeat actions that create various interpretations of its intent, raise concern and risk throwing cold water on the atmosphere of dialogue and negotiations," said Moon, a liberal who facilitated contacts between the United States and North Korea last year.

Some analysts have said that if North Korea resumes testing the kind of longer-range banned ballistic weapons that it fired in unusually large numbers in 2017 -- when many feared a U.S.-North Korea standoff could end in war -- it may signal that North Korea is turning away from diplomacy.

The tensions in 2017 were followed by a surprising diplomatic outreach by North Korea in 2018, when Kim attended summits with the South Korean and Chinese presidents and with Trump. But North Korea has not received what it wants most from its summitry: relief from punitive sanctions imposed over its nuclear and missile programs.

A summit earlier this year between Trump and Kim ended in failure, with the United States saying that North Korea was not offering to take enough disarmament steps in return for the widespread sanctions relief it sought.

Just ahead of the Thursday launch, senior defence officials from South Korea, the United States and Japan met in Seoul to discuss North Korea's earlier launches on Saturday and other security issues. Details from the meeting weren't immediately announced.

Experts who analyzed photos from North Korean state media say it's clear that the North tested a new solid-fuel missile on Saturday that appears to be modeled after Russia's Iskander short-range ballistic missile system.

With the consecutive weapons launches, North Korea is pressuring South Korea to turn away from the United States and support North Korea's position more strongly, said Du Hyeogn Cha, a visiting scholar at Seoul's Asan Institute for Policy Studies. Following the collapse of the Trump-Kim meeting, North Korea demanded that South Korea proceed with joint economic projects that have been held back by U.S.-led sanctions against the North.

By firing weapons that directly threaten South Korea but not the U.S. mainland or its Pacific territories, North Korea also appears to be testing how far Washington will tolerate its bellicosity without actually causing the nuclear negotiations to collapse, Cha said.

Some observers say North Korea may fire more missiles, including medium-range ones, to increase the pressure on the United States. Cha said North Korea isn't likely to fire longer-range missiles, such as its Hwasong-12 intermediate-range missiles and Hwasong-14 and 15 intercontinental ballistic missiles, unless it intends to completely abandon diplomacy since it is certain to invite new U.N. sanctions.

North Korea last conducted a major missile test in November 2017 when it flight-tested the Hwasong-15 and demonstrated the potential capability to reach deep into the U.S. mainland. Experts think North Korea still needs more tests to make its ICBMs viable.

Kim in a New Year's speech said he hopes to continue his nuclear summitry with Trump, but would seek a "new way" if the United States persists with sanctions and pressure against North Korea.

Following the collapse of his second summit with Trump in February, Kim said he is open to a third meeting, but set the end of the year as a deadline for Washington to offer mutually acceptable terms for an agreement.