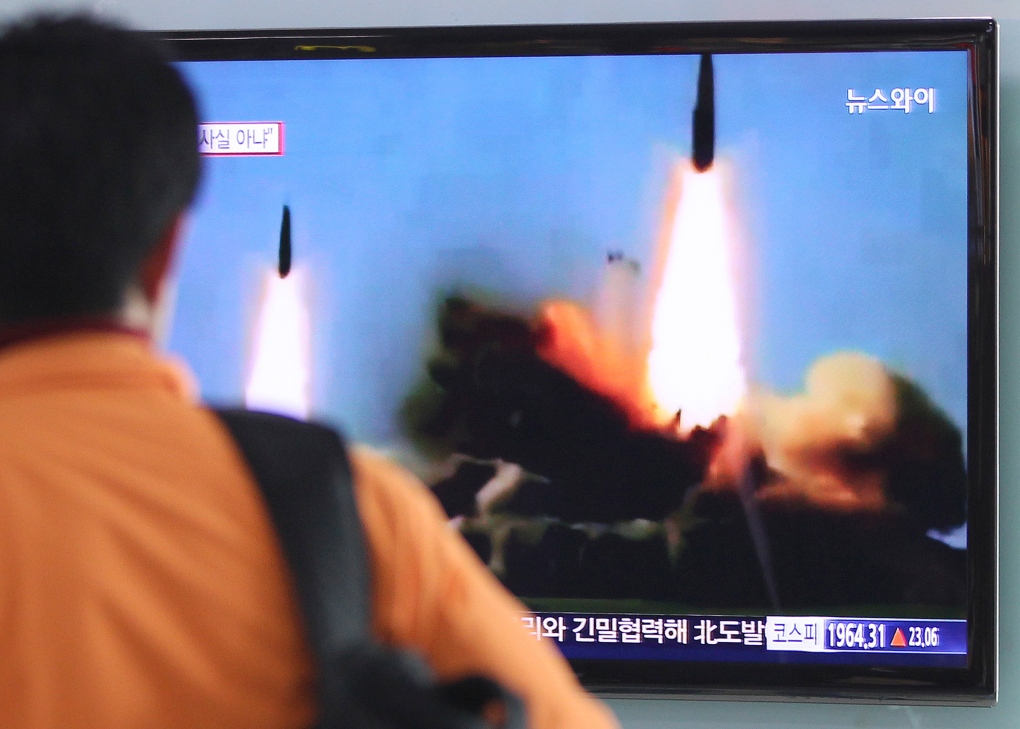 SEOUL, South Korea -- North Korea test-fired two medium-range ballistic missiles on Wednesday, South Korea and the U.S. said, a defiant challenge to a rare three-way summit of its rivals Seoul, Tokyo and Washington that focused on the North's security threat.

The launch of the Rodong missiles -- for the first time since 2009 -- violates UN Security Council resolutions and marks a big escalation from a series of shorter-range rocket launches the North has staged in recent weeks to protest ongoing annual military drills by the U.S. and South Korea that Pyongyang claims are invasion preparation.

The North's arsenal of an estimated 300 Rodong missiles could in theory be fitted with nuclear warheads -- once Pyongyang masters the ability to miniaturize atomic bombs -- and, with a range of up to 1,300 kilometres, could reach Tokyo and key U.S. military bases in Japan.

The launch comes on the fourth anniversary of the sinking of a South Korean warship that Seoul and other nations blame on a North Korean torpedo. Pyongyang denies involvement in the attack, which killed 46 sailors.

It also poses a big challenge to what had been recently improving relations between Pyongyang and Seoul. A year after threatening each other with war, the bitter rivals had restored some trust and held reunions of families divided by the Korean War of the early 1950s. The Korean Peninsula remains officially at war because that war ended with an armistice, not a peace treaty.

North Korean state media made no immediate comment on the launch.

Joel Wit, a former State Department official and editor of the 38 North website, said the launch could be a serious setback to recent efforts by North Korea to improve relations with South Korea and Japan. It also could put China, the North's only major ally, in an awkward position if and when the U.S. seeks further sanctions at the United Nations.

North Korea and Japan are also to restart high-level government-to-government talks on Sunday after a 16-month hiatus. An analyst said the missile launch could be a way to test Tokyo's commitment to negotiating a deal that would provide aid to Pyongyang in return for returning any surviving Japanese abducted by North Korea in the 1970s and 1980s.

"If Japan goes ahead with talks despite the missile launches, that would be a strong signal to Pyongyang of Japan's commitment to the talks," said Narushige Michishita, director of the Security and International Studies Program at the National Graduate Institute for Policy Studies in Tokyo.

During a regular briefing Wednesday, Chief Cabinet Secretary Yoshihide Suga called the launches "extremely problematic" but he said Tokyo would go ahead with the planned talks with Pyongyang as they are set to discuss humanitarian issues.

North Korea is thought to have a handful of rudimentary nuclear bombs, but most analysts don't believe Pyongyang has yet mastered the ability to build warheads small enough to mount on a missile that could threaten the United States. To achieve that goal, Pyongyang has staged several long-range rocket tests in recent years and, a year ago, its third nuclear test. Talks aimed at ending the North's nuclear program have been stalled since 2009.

The most recent launch came as U.S. President Barack Obama, Japanese Prime Minister Shinzo Abe and South Korean President Park Geun-hye met Tuesday in the Netherlands to discuss North Korea's security threat. It was Park and Abe's first face-to-face meeting since they both took office more than a year ago.

The U.S. is now working to set up an early meeting in Washington between nuclear envoys of the three nations to discuss North Korea's escalating actions and continued reluctance to take meaningful steps on denuclearization, a senior U.S. official said on condition of anonymity because the meeting has yet to be scheduled.

Last year, North Korea responded to international condemnation of its third nuclear test and the annual springtime U.S.-South Korean military drills by threatening nuclear strikes on Washington and Seoul. Analysts say the impoverished North chafes against the drills, which Washington and Seoul call routine and defensive in nature, because it has to spend precious resources responding with its own exercises.