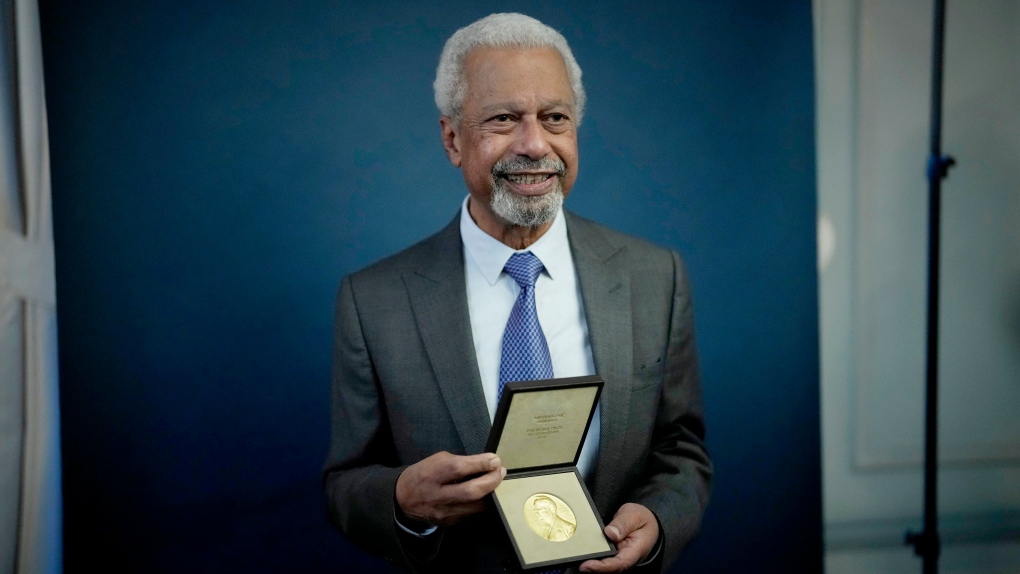 Abdulrazak Gurnah, a Tanzanian-born novelist and emeritus professor who lives in the U.K., poses for photographs with his 2021 Nobel Prize for Literature medal after being presented it by the Ambassador of Sweden Mikaela Kumlin Granit in a ceremony at the Swedish Ambassador's Residence in London on Dec. 6, 2021. (AP Photo/Matt Dunham)

LONDON -- Winners of the 2021 Nobel Prizes began receiving their awards on Monday in scaled-down local ceremonies adapted for pandemic times with three of them warning that climate change is the biggest threat the world faces yet they remain optimistic.

For a second year, COVID-19 has scuttled the traditional formal banquet in Stockholm attended by winners of the prizes in chemistry, physics, medicine, literature and economics, which were announced in October. The Nobel Peace Prize is awarded separately in Oslo, Norway.

Literature laureate Abdulrazak Gurnah was first to get his prize in a lunchtime ceremony Monday at the Swedish ambassador's grand Georgian residence in central London.

Ambassador Mikaela Kumlin Granit said the U.K.-based Tanzanian author had been awarded the Nobel Prize in literature for his "uncompromising and compassionate penetration of the effects of colonialism and the fate of the refugee in the gulf between cultures and continents."

"Customarily you would receive the prize from the hands of His Majesty, the king of Sweden," she told Gurnah at the ceremony attended by friends, family and colleagues. "However, this year you will be celebrated with a distance forced upon us because of the pandemic."

Gurnah, who grew up on the island of Zanzibar and arrived in England as an 18-year-old refugee in the 1960s, has drawn on his experiences for 10 novels, including "Memory of Departure," "Pilgrims Way," "Afterlives" and "Paradise." He has said migration is "not just my story -- it's a phenomenon of our times."

Later Monday, Italian physics laureate Giorgio Parisi is due to receive his prize at a ceremony in Rome. U.S.-based physics laureate Syukuro Manabe, chemistry laureate David W.C. MacMillan and economic sciences laureate Joshua D. Angrist will be given their medals and diplomas in Washington.

MacMillan, German physics prize winner Klaus Hasselmann and economics prize winner Guido Imbens, who is Dutch but lives in the United States, had a joint virtual news conference Monday where they were asked what's the biggest problem facing humanity and what do they worry about most. All three answered climate change, with Imbens calling it the world's "overarching problem."

"Climate change is something which is clearly going to have a large impact on society," MacMillan said during the news conference. "But at the same time given the science, given the call to arms amongst scientists, I really feel more optimism. And I feel there's a real moment happening with scientists moving towards trying to solve this problem."

"I would bet on that fact that we would solve this problem," MacMillan said.

Hasselmann, whose work on climate change won him the prize, said he's more hopeful because the world's youth and movements like Fridays for the Future "have picked up the challenge and are getting across the message to the public that we have to act and respond to the problem."

Hasselmann said he's more optimistic now about climate change than 20 or 30 years ago.

Imbens said he also is disturbed that misinformation, especially about COVID-19 and vaccines, is splitting society apart. He recalled growing up in the Netherlands and nearly everyone agreed on the need for the polio vaccine.

"And yet here we don't seem to have found a way of making these decisions that we can all live with," Imbens said. "And that's clearly made it much harder to deal with the pandemic."

More ceremonies will be held throughout the week in Germany and the United States. On Friday -- the anniversary of the death of prize founder Albert Nobel -- there will be a celebratory ceremony at Stockholm City Hall for a local audience, including King Carl XVI Gustav and senior Swedish royals.

A Nobel Prize comes with a diploma, a gold medal and a 10-million krona ($1.15 million) cash award, which is shared if there are multiple winners.

The Nobel Peace Prize is awarded in Oslo because Nobel wanted it that way, for reasons he kept to himself. A ceremony is due to be held there Friday for the winners, journalists Maria Ressa of the Philippines and Dmitry Muratov of Russia.

The Norwegian news agency NTB said the peace prize festivities would be scaled down, with fewer guests and participants required to wear face masks. Norway has seen an uptick in cases of the new Omicron variant, and a spokesman for the Norwegian Nobel Committee told NTB that it was "in constant contact with the health authorities in Oslo."

Seth Borenstein in Washington, and Jan M. Olsen in Copenhagen, Denmark, contributed to this report

Next pandemic could be more lethal than COVID-19, Oxford-AstraZeneca vaccine creator says