NAIROBI, Kenya -- After almost a week, there is no precise death toll, no word on the fate of dozens still missing and no details on the al Qaeda-linked terrorists who attacked Nairobi's most upscale mall.

As al-Shabab militants struck two Kenyan border towns and threatened more violence, relatives of the mall victims wept outside the city morgue Thursday, frustrated by the lack of information and a holdup in the release of bodies of the victims.

Roy Sam, whose brother, 33-year-old Thomas Ogala, was killed, said he had been going to the morgue since Monday, but workers there had not prepared his brother's body, which was mangled by a close-range gunshot wound to the head -- an apparent execution.

"They said they were going to prepare the body to make it look nice, but we came back the next day and the next, and it wasn't any different," Sam said.

The morgue superintendent, Sammy Nyongesa Jacob, said workers were told not to touch the bodies until post-mortuary studies had been completed.

Kenya's chief pathologist, Johansen Oduor, said his team was removing bullets and shrapnel from victims to find out exactly how they were killed, then handing them over to police as evidence.

"A lot of them died from bullet wounds -- the body, the head, all over," he said. "Some also died from grenades, shrapnel."

He refused to reveal how many bodies were in the morgue but said he was told to expect more -- though he would not say how many.

It was the largest terrorist attack in Kenya since the 1998 bombing of the U.S. Embassy, and FBI agents were dispatched to do fingerprint, DNA and ballistic analysis on the bodies. They were joined by investigators from Britain, Germany and Canada.

There have been no details on what the international team has found so far in the bullet-scarred, scorched mall, work that is expected to take at least a week, said Kenyan police spokeswoman Gatiria Mboroki.

The Kenyan Red Cross said Thursday that 61 people remain missing and many worry they may be buried under the rubble -- though the government has insisted few victims are believed to still be inside.

The government says at least 67 people were killed in the assault by 12 to 15 al-Shabab militants on the Westgate Mall, including 61 civilians and six security forces. Five militants also were killed, but questions remained about the fate of the remaining attackers and fears persisted that some had managed to escape.

Many also questioned how such an audacious attack could have been carried out at one of Kenya's most prominent sites and a symbol of its economic success, where shops for retail giants like Adidas, Nike and Bose drew both foreigners as well as wealthy Kenyans.

In what appeared to be the first round of political blame-shifting, officials from the National Intelligence Service gave journalists a report from Sept. 21, 2012 -- exactly one year before the Saturday attack -- that said suspected al-Shabab operatives were in Nairobi and planned to mount suicide attacks on an "undisclosed date, targeting Westgate Mall."

Al-Shabab, meanwhile, threatened more attacks in Kenya, saying Thursday on its Twitter feed that the mall attack "was just the premiere of Act 1."

"Make your choice today and withdraw all your forces," the group's leader, Ahmed Abdi Mohamed Godane, said in a statement posted on the Internet late Wednesday. "Otherwise be prepared for an abundance of blood that will be spilt in your country, economic downfall and displacement."

Al-Shabab said the Nairobi mall attack was not only directed at Kenya, but was also "retribution against the Western states that supported the Kenyan invasion and are spilling the blood of innocent Muslims in order to pave the way for their mineral companies."

The militant group, whose name means "The Youth" in Arabic, first began threatening Kenya with a major terror attack in late 2011, after Kenya sent troops into Somalia following a spate of kidnappings of Westerners inside Kenya.

Kenya has also suffered many small-scale attacks along its 682-kilometre  border with Somalia, and the group struck again Wednesday night and early Thursday, targeting two Kenyan towns near the Somali border in strikes that killed three people, including two police officers.

As the investigation continued into the mall attack, FBI agents from New York City, including members of the Joint Terrorism Task Force, bomb squad technicians and evidence recovery specialists arrived in Nairobi, a U.S. law enforcement official confirmed. The official spoke on condition of anonymity because he wasn't authorized to discuss the operation.

The international investigation is being co-ordinated by Interpol, which sent an incident response team that arrived in Nairobi on Wednesday, the Kenyan government said.

The Interpol team includes disaster victim identification and data specialists who will carry out real-time comparisons of evidence collected inside the mall against the France-based agency's database on DNA and fingerprints from its 190 member country network, said Interpol official Jean-Michel Louboutin.

"Whether it be through comparison of information against Interpol's global databases, or the issuance of a notice to identify a victim, locate a wanted person, or seek additional information about suspects, we will offer all necessary assistance to help bring those responsible to justice," Louboutin said in a statement. 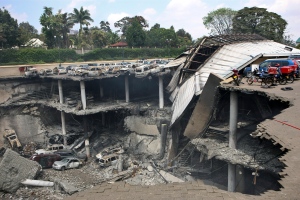