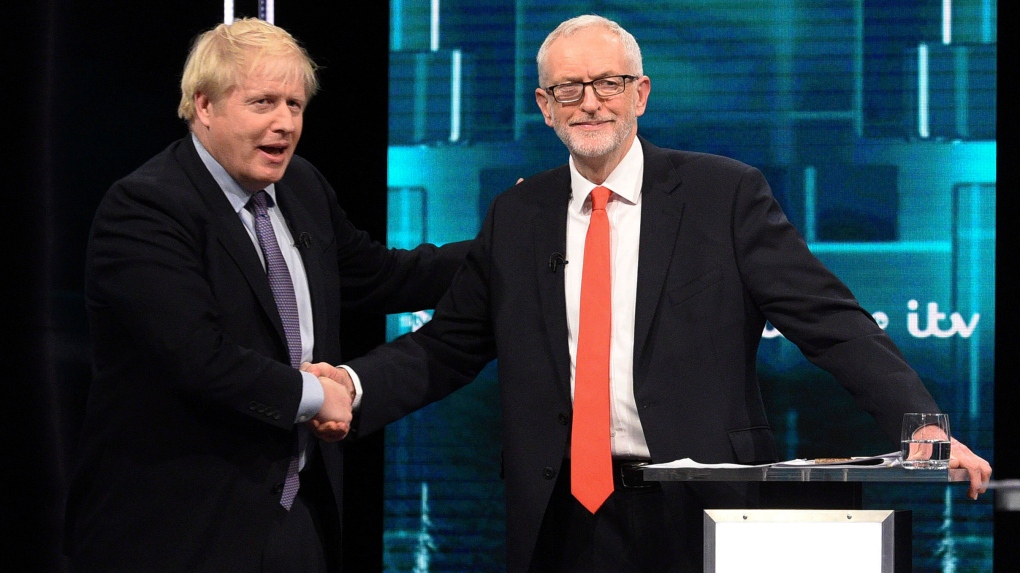 LONDON -- British Prime Minister Boris Johnson and opposition leader Jeremy Corbyn attacked each other's policies on Brexit, health care and the economy Tuesday in a televised election debate that likely failed to answer the question troubling many voters: Why should we trust you?

The two politicians hammered away at their rival's weaknesses and sidestepped tricky questions about their own policies in the hourlong encounter, which was the first-ever head-to-head TV debate between a British prime minister and a chief challenger.

It was a chance for Corbyn to make up ground in opinion polls that show his Labour Party trailing Johnson's Conservatives ahead of the Dec. 12 election. For Johnson, the matchup was an opportunity to shake off a wobbly campaign start that has seen the Conservatives thrown on the defensive by candidates' gaffes and favouritism allegations involving Johnson's relationship with an American businesswoman while he was London's mayor.

Both men stuck to safe territory, with Corbyn touting Labour's plans for big increases in public spending and Johnson trying to keep the focus on his promise to "get Brexit done."

Speaking in front of a live audience at the studios of broadcaster ITV in Salford, in northwest England, the two men traded blows over Britain's stalled departure from the European Union -- the reason the election is being held. The U.K. is due to leave the bloc on Jan. 31, after failing to meet the Oct. 31 deadline to approve a divorce deal.

Johnson pushed to hold the election more than two years ahead of schedule in an effort to win a majority in the House of Commons that could pass his departure agreement with the EU. He blamed the opposition for "dither and delay, deadlock and division" and said a Conservative government would "end this national misery" and "break the deadlock."

Corbyn said a Labour government would also settle the Brexit question by negotiating a new divorce deal before holding a new EU membership referendum within six months. A lifelong critic of the EU and lukewarm advocate of Britain's membership in the bloc, Corbyn did not answer when asked repeatedly by Johnson whether he would support leaving or remaining in a new referendum.

The Labour leader, meanwhile, slammed Johnson's claim that he would negotiate a new trade deal with the EU by the end of 2020 as a fantasy, saying such deals usually take years to complete.

"You're not going to get it done in a few months, and you know that perfectly well," Corbyn said.

The Labour leader also repeated his allegation that Johnson planned to offer chunks of Britain's state-funded health system to American medical firms as part of future trade negotiations with the U.S.

All 650 seats in the House of Commons are up for grabs in the election. Smaller parties in the race include the pro-EU Liberal Democrats, who want to cancel Brexit; the Scottish National Party, which seeks Scotland's independence from the U.K.; the anti-EU Brexit Party led by Nigel Farage; and the environmentalist Greens.

The debate featured only two candidates after the High Court in London rejected a legal challenge from the Liberal Democrats and the Scottish National Party over ITV's decision to exclude their leaders from the debate. The court decided it was a matter of "editorial judgment" to limit the format to the leaders of Britain's two largest political parties, one of whom will almost certainly be the country's next prime minister.

Later in the campaign, the leaders of smaller parties will take part alongside Labour and the Conservatives in two seven-way debates, and Corbyn and Johnson are due to square off again in a BBC debate on Dec. 6.

The stakes are high for both Johnson and Corbyn as they try to win over a Brexit-weary electorate. Both are trying to overcome a mountain of mistrust.

Neither delivered the kind of performance to silence their critics.

Johnson -- who shelved his customary bluster in favour of a more muted, serious approach -- is under fire for failing to deliver on his often-repeated vow that Britain would leave the EU on Oct. 31.

He drew derisive laughter from the audience when he urged voters, "Look what I have said I'm going to do as a politician and look what I've delivered."

Corbyn, a stolid socialist, is accused by critics of promoting high-tax policies and of failing to clamp down on anti-Semitism within his party. His refusal to say which side he would be on in a Brexit referendum was also met with laughter.

Pushed by moderator Julie Etchingham to pledge to tone down the angry rhetoric that has poisoned British politics since the country's 2016 Brexit referendum, the two men awkwardly agreed and shook hands.

There was another awkward moment when they were asked about Prince Andrew's friendship with American sex offender Jeffrey Epstein. Andrew gave a televised interview last week in which he denied claims that he had sex with Virginia Giuffre, a woman who says she was trafficked by Epstein as a teenager.

Asked if the British monarchy was "fit for purpose," Corbyn replied, "Needs a bit of improvement." Johnson said "the institution of the monarchy is beyond reproach."

Both expressed sympathy for Epstein victims -- something Prince Andrew failed to do in his interview.

Televised debates are a relatively new phenomenon in British elections -- the first took place in 2010 -- and they have the power to transform campaigns. A confident 2010 appearance by former Liberal Democrat leader Nick Clegg sparked a wave of "Cleggmania" that helped to propel him into the deputy prime minister post in a coalition government with the Conservatives.

During Britain's last election in 2017, then-Prime Minister Theresa May refused to take part in any TV debates. The decision reinforced the view that she was a weak campaigner, and the election turned out to be a debacle for her Conservative Party, which lost its majority in Parliament.

Tim Bale, professor of politics at Queen Mary University of London, said Tuesday's debate was "a pretty messy score draw, although Corbyn may just have snuck a win in the dying minutes."

"Hardly two men at the top of their game, though," he said.