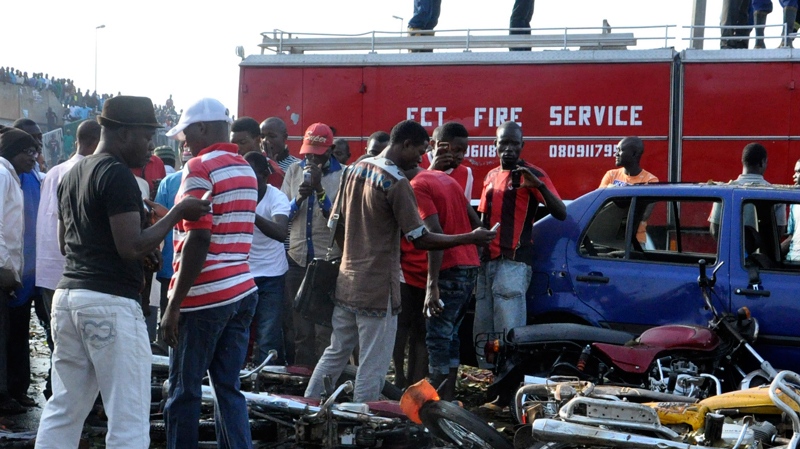 People gather at the site of a blast at the Nyanya Motor Park, about 16 kilometres from the centre of Abuja, Nigeria, Monday, April 14, 2014. (AP / Gbemiga Olamikan)

ABUJA, Nigeria -- A massive explosion ripped through a bus station during the morning rush hour in Nigeria's capital, killing at least 71 people and wounding 124 in a bombing that marked the bloodiest terrorist attack ever in Abuja.

President Goodluck Jonathan visited the scene and blamed Boko Haram, an Islamic extremist group which operates in the northeast of Nigeria and which has been threatening to attack Nigeria's capital. One official said he believed the bomb buried in the earth while the emergency management agency said the explosives were apparently hidden in a vehicle.

Survivors screamed in anguish and the stench of burning fuel and flesh hung over the site where billows of black smoke rose as firefighters worked to put out the fires. Reporters saw rescue workers and police gathering body parts as ambulances rushed the wounded to the hospitals. State television has broadcast calls for blood donations.

Security personnel battled to belatedly cordon off the area as a bomb detonation team was combing it for secondary explosives, a common occurrence here. Thousands of bystanders gathered, ignoring warnings to stay away. While violence has torn the northeast where Boko Haram has killed thousands, the capital in the middle of Africa's most populous country has been relatively peaceful.

Two notable exceptions occurred when Boko Haram members rammed two explosives-laden cars into the lobby of the United Nations office building in 2011, killing at least 21 people and wounded 60 and when militants from the southern oil-producing Niger Delta in October 2010 exploded two car bombs at Independence Day celebration, leaving at least 12 people dead and 17 injured. The Movement for the Emancipation of the Niger Delta which carried out that attack has been largely dormant since then, except for some sabotage of oil pipelines.

There was no immediate claim for Monday's bombing though bus stations are a favoured Boko Haram target. In March 2013, the extremists drove a car bomb into the main bus station in Kano, Nigeria's second biggest city, killing at least 25 people.

Boko Haram's campaign to make Nigeria an Islamic state with Sharia, or Islamic law, enforced throughout the country poses the greatest threat to its cohesion and security and threatens nearby countries where the fighters have gone to train and fight.

In May 2013, Jonathan declared a state of emergency and deployed thousands of troops to curb the violence in northeast Nigeria after the extremists took control of entire towns and villages. Security forces quickly forced the Islamic insurgents out of urban areas but have been battling to dislodge them from hideouts, despite near-daily air bombardments and ground assaults this year on forests and mountain caves along the border with Cameroon.

The military has claimed it has the upper hand in the war, but the extremists have fought back with more frequent and ever-deadlier attacks.

Governors and traditional leaders in the northeast have demanded that Jonathan end the state of emergency, saying it is causing suffering and has not been effective. Some 750,000 people have been forced from towns and villages, including tens of thousands of farmers who had to abandon their farms, risking a food shortage this year.

There was believed to be only one bomb detonation Monday with secondary explosions as vehicle fuel tanks ignited and burned. It appeared the explosives were buried in the dirt ground of the bus station, said John Ahwen, counter-terrorism chief of the National Security and Defence Corps. But the National Emergency Management Agency said it thought the explosives were hidden in a vehicle.

"I can't count the number of people that died. They took them in open vehicles. People were running and there was confusion," said civil servant Ben Nwachukwu.

The blast left a hole 1.2 metres in the ground of Nyanya Motor Park about 16 kilometres from the city centre. It happened at 6:45 a.m. (05:45 GMT) as people were travelling to work.

The deadliest toll in the nearly 5-year-old Islamic uprising came March 14 when Boko Haram attacked the main military barracks in the northeast, Giwa Barracks in Maiduguri, and freed hundreds of detainees. Amnesty International said more than 600 people were killed, most of them unarmed detainees gunned down by soldiers.

Last week, Boko Haram suspects detained at the State Security Service headquarters in Abuja, next door to the residence and office of President Goodluck Jonathan, staged a failed jailbreak in which it is suspected that they had outside help. The agency said 21 detainees were shot and killed and two agents wounded in a shootout that lasted more than two hours.

The militants are blamed for attacks in northeast Nigeria that have killed more than 64 people in the past week, including eight teachers living at a boarding school that had been closed because of frequent attacks on schools in which hundreds of students have died.

Boko Haram -- the nickname means "Western education is forbidden" -- has been attacking schools, villages, market places and military barracks and checkpoints this year in increasingly frequent and deadly attacks. Its mission is to force an Islamic state on Nigeria whose 170 million people are divided almost equally between Muslims living mainly in the north and Christians in the south.