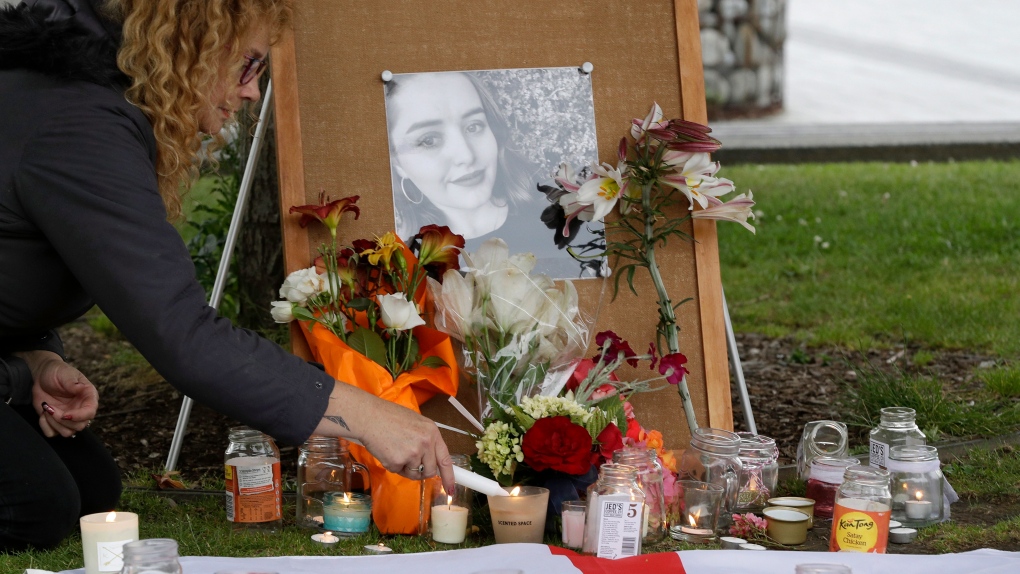 In this Dec. 12, 2018, file photo, a woman lights candles during a candlelight vigil for murdered British tourist Grace Millane at Cathedral Square in Christchurch, New Zealand. At a sentencing hearing at the Auckland High Court on Friday Feb. 21, 2020, the killer, who has name suppression, has been sentenced to life imprisonment with a minimum non-parole period of 17 years. (AP Photo/Mark Baker, File)

WELLINGTON, NEW ZEALAND -- Warning: Details in the story may be disturbing to some

A New Zealand man was sentenced to life in prison Friday for murdering a young British backpacker, whose mother told the court the stealing of her daughter's life had ripped a hole in her heart.

Grace Millane was strangled to death on her 22nd birthday in December 2018 by a man she met through the dating app Tinder.

She went out for drinks with him before returning to his hotel apartment in central Auckland, where he killed her. He stuffed her body into a suitcase, drove to a forest and buried it in a shallow grave, where police found it a week later.

The name of the 28-year-old man is being kept secret for now by court order, a restriction that's sometimes imposed in the New Zealand judicial system for reasons such as another pending trial.

Murder typically comes with a life sentence in New Zealand, so at stake at Friday's sentencing at the Auckland High Court was the number of years the killer would serve in jail before becoming eligible for parole. The judge set the minimum non-parole period at 17 years after the defence had argued for 12.

Judge Simon Moore ended up agreeing with prosecutors, saying the naked photos the man took of Millane after her death were correctly described as depraved and underscored his total lack of empathy toward her.Moore said callousness was shown by a hardened mind and a "numbness of the soul."

"Grace was vulnerable. She was a young woman in a strange country, and you were a stranger who she trusted," the judge said, according to news organization Stuff.

Earlier, the victim's mother Gillian Millane told the court via video link that the killer had ripped a hole in her heart by stealing her daughter's life.

"She died terrified and alone in a room with you," Gillian Millane said, according to the New Zealand Herald. The man in the dock kept his head bowed, rubbed his face and had his eyes closed, the newspaper reported.

The lead detective on the case, Detective Inspector Scott Beard, told reporters afterward that the defence argument that it was rough sex gone wrong had re-victimized Millane and her family.

"Strangling someone for five to 10 minutes till they die is not rough sex," the detective said. Jurors had heard during the trial that the man must have continued strangling Millane for some time after she had passed out.

Grace Millane's death shocked many in New Zealand, which prides itself on welcoming tourists and where many people travel abroad themselves. Hundreds of people attended candlelight vigils after she died, and Prime Minister Jacinda Ardern spoke about New Zealanders feeling "hurt and shame" that she was killed in their country.

Tourism is one of New Zealand's largest industries, accounting for more than 20% of foreign exchange earnings and about 6% of the overall economy.

The case has been closely followed in Britain as well.