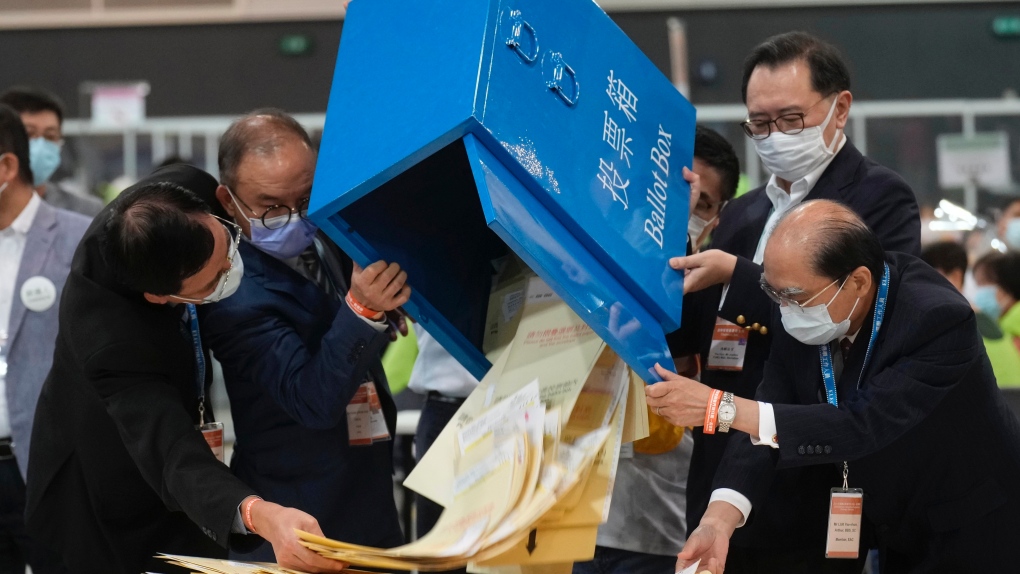 HONG KONG -- Results for the vote for members of Hong Kong's Election Committee were finalized Monday after hours of delays, with just one opposition-leaning candidate elected to the 1,500-strong committee.

On Sunday, select Hong Kong residents voted for members of the Election Committee that will choose the city's leader in the first polls following reforms meant to ensure candidates are loyal to Beijing.

Results were expected to be announced by midnight, but due to several delays they were only announced at 8 a.m. on Monday. Authorities said there were problems with the ballot verification papers, and that it was likely that officials were filling in paperwork incorrectly, causing the delays.

The Election Committee will select 40 of 90 lawmakers in the city's legislature during elections in December, as well as elect Hong Kong's leader during polls in March next year.

In May, the legislature amended Hong Kong's electoral laws to ensure that only "patriots" -- people who are loyal to China and the semi-autonomous territory -- will rule the city. The committee also was expanded to 1,500 members, from 1,200, and the number of direct voters for committee seats was reduced from about 246,000 to less than 8,000.

The restructured electoral process guarantees a vast majority of the Elections Committee will be largely pro-Beijing candidates, who are likely to choose a chief executive and nearly half of lawmakers who are aligned with the ruling Chinese Communist Party.

The changes are part of a broad crackdown on Hong Kong civil society following mass pro-democracy protests in 2019. Authorities have tightened control over the former British colony with a sweeping national security law imposed by China's Communist Party that effectively criminalized opposition to the government. The law and other changes have forced several civil organizations to disband or seen their leaders arrested.

The only opposition-leaning candidate was elected in the social welfare sector. Of the more than 400 candidates who were running for seats Sunday, just two were friendly to the opposition camp in Hong Kong, with the rest being pro-Beijing candidates.

Candidates in the elections were previously vetted by a small but powerful committee headed by Chief Secretary John Lee to ensure that they meet the requirements for office, which include upholding the basic law and pledging allegiance to Hong Kong.

"After improving the electoral system, the new Election Committee consists of a number of subsectors and is broadly representative," the Hong Kong government said in a news release Monday, citing an unidentified spokesperson.

"This new constitutional function will facilitate rational interaction between the executive authorities and the legislature, and effectively enhance governance efficiency," the government said.

The government put turnout at nearly 90 per cent but said vote counting was delayed by problems with ballot box delivery and was "beyond reasonable expectation."

"Today's Election Committee elections are very meaningful as it is the first elections held after we have improved the electoral system to ensure that only patriots can take office," Hong Kong leader Carrie Lam said Sunday. It's not yet known if Lam will seek reelection in March.

Separately, Hong Kong national security police on Monday arrested at least two student members of the political organization Student Politicism, according to the group's Facebook page. It is not clear why they were arrested and police did not immediately comment on the arrests.

The student group, which was set up last year, is one of the few political organizations left in Hong Kong. Many political and opposition organizations have ceased to operate following the implementation of the national security law.

Critics say the national security law and electoral changes restrict freedoms Hong Kong was promised it could maintain for 50 years following the territory's 1997 handover to China from Britain, which ruled the city as a colony beginning in 1841.

Over 140 people have been arrested under the security law, which outlaws secession, subversion, terrorism and foreign collusion to intervene in the city's affairs.