'Neglected danger': Nukes not in forefront in speeches at UN 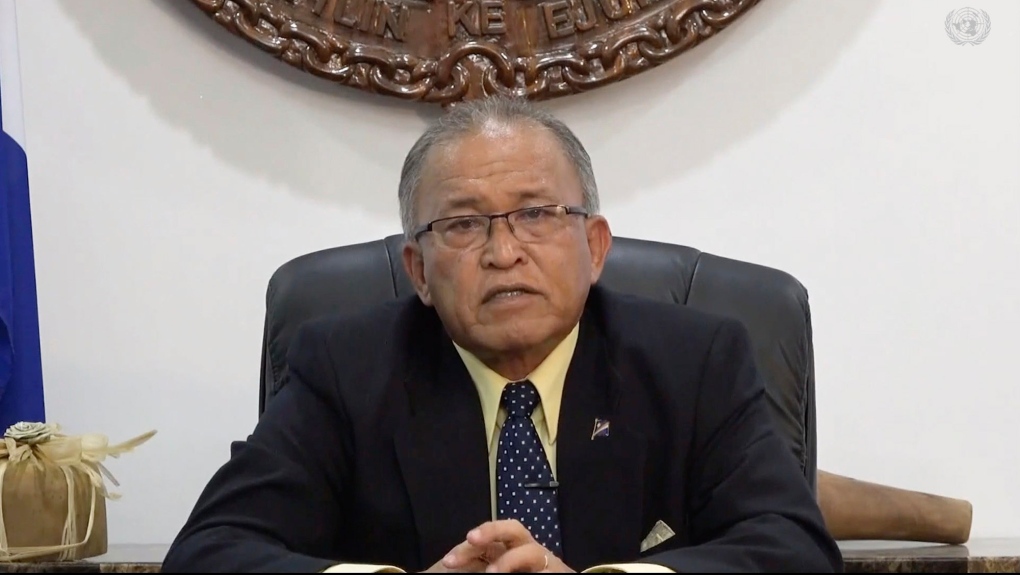 In this image made from UNTV video, Marshall Islands President David Kabua speaks in a pre-recorded message that was played during the UN General Assembly, Sustainable Development Goals, at UN headquarters, in New York, Monday, Sept. 20, 2021. (UNTV via AP, File)

NEW YORK -- It was the Marshall Islands' turn to speak, and the president wanted to remind world leaders of a cause the United Nations has espoused since its founding.

"No effort should be spared," President David Kabua told the UN General Assembly this month, "to move towards a world free of nuclear weapons and nuclear risk."

It might seem like a must-discuss topic in countries' big speeches at the annual meeting of presidents, prime ministers and other top officials -- perhaps especially in a year when a historic nuclear weapons ban treaty take effect, though without participation from nuclear-armed nations.

This year also marks the 25th anniversary of the signing of the Comprehensive Nuclear Test Ban Treaty, which has yet to enter into force for lack of ratification by eight crucial nations but has helped greatly reduce such tests. And it's the 75th anniversary of the General Assembly's very first resolution, which sought proposals to eliminate atomic weapons.

So where was all the discussion?

Nuclear disarmament wasn't a dominant theme, particularly among major powers, in the "General Debate" that is the assembly's centerpiece and provides something of a yearbook of what's on world leaders' minds. Even specific concerns about the troubled Iran nuclear deal and North Korea's atomic program didn't get as much emphasis as in some years past.

The world's nuclear arsenal "is a forgotten and neglected danger, but it is forever present," said Darryl Kimball of the Washington-based Arms Control Association. "It deserves to be at the top of the agenda, and it really should demand more attention."

It did get some, including from the nations with the biggest stockpiles.

Russian Foreign Minister Sergey Lavrov said "the world was encouraged" by last winter's renewal of the New START treaty that limits Moscow's and Washington's nukes, and he noted the countries' upcoming strategic talks. U.S. President Joe Biden said the world needed to come together on problems including "enduring threats like nuclear proliferation."

UN Secretary-General Antonio declared "we need progress on nuclear disarmament," and there were separate events on it during diplomacy's biggest convocation of the year.

Still, the treatment of the issue in national speeches "seems to suggest that nuclear disarmament is not a big priority among the nuclear-armed states" and reflects uncertainty about prospects for progress, said Tytti Erñst, a disarmament researcher at the Stockholm International Peace Research Institute.

It's no surprise that nukes didn't get more of the spotlight from leaders preoccupied by the coronavirus pandemic and climate change. But it's still "a missed opportunity," said Richard Ponzio of the Stimson Center, a Washington-based foreign policy think tank.

The chance to convene leaders from around the planet "should not go underutilized," said Ponzio, a former UN and U.S. State Department official.

The UN was founded in the wake of World War II. The world had just watched the devastating debut of nuclear weapons -- the bombs that the United States dropped on two Japanese cities in 1945, killing over 100,000 people.

The so-called Cold War followed. The nuclear-armed U.S. and Soviet Union engaged in proxy conflicts, came perilously close to the use of atomic weapons in the 1962 Cuban missile crisis, and pursued an arms race animated by a chilling doctrine of deterrence: "mutual assured destruction."

The potential for atomic annihilation loomed over international relations. And it burrowed into the psyche of generations of Americans, at least, who grew up with bomb shelters, "duck and cover" air raid drills, and depictions of nuclear war in formats ranging from the 1964 "daisy ad" campaign commercial to the 1983 TV film "The Day After."

The UN "helped reduce the tensions and helped to hold back the darkness," as U.S. President John F. Kennedy put it to the General Assembly in 1963. He spoke shortly before a limited nuclear weapon test treaty took effect.

There have since been more pacts and some significant progress.

There were over 2,000 nuclear tests worldwide from 1945 to 1996, but fewer than a dozen since. The global count of nuclear warheads is about one-quarter what it was at its mid-'80s peak, though still potentially cataclysmic at more than 13,000. And the Cold War's end, finalized with the 1991 dissolution of the Soviet Union, somewhat eased global fears of nuclear conflict.

Concerns about terrorism, global warming and other perils subsequently grew and focus on nuclear issues receded, for many, in a world increasingly populated by people who didn't experience the Cold War.

"What's going to be very interesting to see, over the next few years, is how the new generation feels about this and in what direction they take this," Erath said. He noted that some security experts have discussed whether climate change could propel conflict and potentially raise the risks of nuclear confrontation.

To be sure, nuclear disarmament did get its own place in the assembly's agenda. Some presidents and premiers, plus scores of foreign ministers, were speaking at an event Tuesday marking the International Day for the Total Elimination of Nuclear Weapons.

A biennial conference on the assembly's sidelines last week aimed to build support for the comprehensive test ban treaty, and Ireland led a UN Security Council discussion Monday on the state of the pact.

The council currently includes six nuclear-armed nations: Britain, France, Russia, China, the U.S. and India. The last three are among the eight countries whose ratification is most needed under the treaty's complicated structure.

While there may not have been breakthroughs, Ireland's European affairs minister, Thomas Byrne, called the meeting "a clear reminder of just how relevant nuclear disarmament is today."

There were other, sometimes poignant reminders from the General Assembly rostrum over the past week.

"Nuclear weapons remain the ultimate agents of mass destruction," Nigerian President Muhammadu Buhari said. Austrian Foreign Minister Alexander Schallenberg, whose country hosts a conference next year on the nuke ban treaty that recently took effect, warned that "we cannot increase our potential to destroy -- and, most of all, by hanging onto the myth of nuclear deterrence."

Japan, pledging to try to bridge differences about disarmament, noted that it is the only nation where atom bombs have been dropped. Costa Rica cited "interdependence" in appealing for a nuke-free world.

And Kabua, the Marshall Islands' president, recalled the dozen years of U.S. nuclear weapons tests that his country endured in the mid-20th century. Their legacy continues "in our waters, our lands and our bodies," he said.

"No people or nation," Kabua added, "should ever have to bear a burden such as ours."

Jennifer Peltz, a New York City-based reporter for The Associated Press, has been covering the United Nations since 2017.