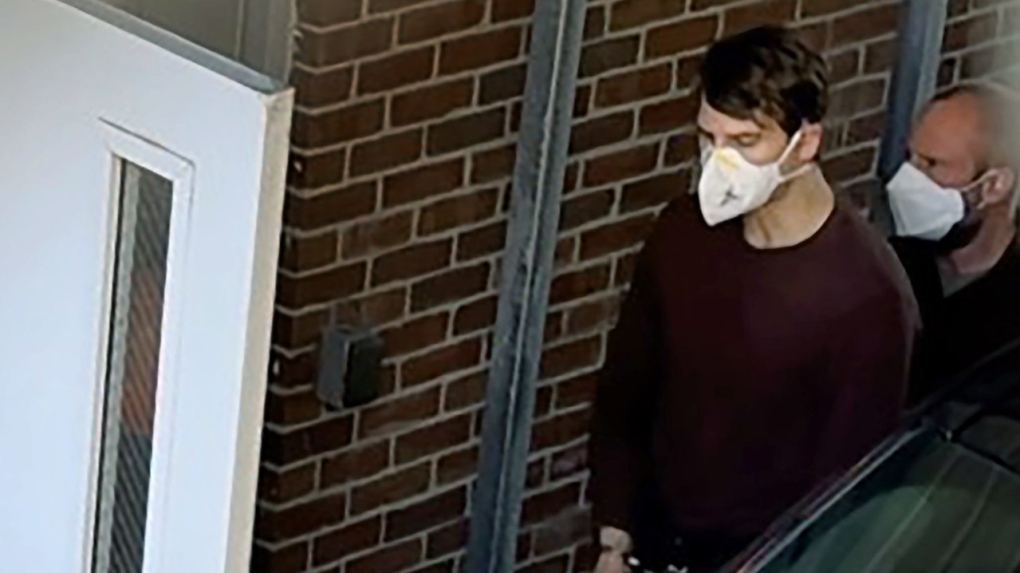 In this image taken from video provided courtesy of WCVB-TV, Nathan Carman, front, is escorted into federal court on May 11, 2022, in Rutland, Vt. (Sera Congi/WCVB-TV via AP)
HARTFORD, Conn. -

The circumstantial evidence against Nathan Carman had been lying in plain sight for years before his surprising indictment and arrest this month on allegations he killed his mother at sea off New England in a plot to inherit millions of dollars.

U.S. federal prosecutors in Vermont are not commenting on the timing of their decision to put the case before a grand jury, and the indictment offers no clues and no new information on the case, which included a dramatic rescue at sea and the suspicious deaths of two members of a wealthy New England family.

Legal experts and other law enforcement officials say the delay in bringing a criminal case could be the result of several factors, including that his mother and his boat have never been found.

“It’s very difficult to charge murder federally ... so I think what the government has been doing for the last six years is to build its case to charge him with mail fraud and wire fraud,” said Jessica Brown, a former state and federal public defender who is now an assistant professor at Vermont Law School.

The grand jury indictment accuses Carman, 28, of Vernon, Vermont, of murder and fraud in the killing of his mother, Linda Carman, during a fishing trip that began in Rhode Island. Carman made international headlines when he was found alone in a life raft near Martha's Vineyard, Massachusetts, eight days after he and his mother left port.

The indictment also accuses him of fatally shooting his millionaire grandfather, John Chakalos, in 2013 in Connecticut, but does not charge him with that killing. He has repeatedly denied any involvement in both deaths.

Federal prosecutors say their deaths paved the way for Carman to inherit an estimated US$7 million — his mother’s share of Chakalos’ estate. The inheritance remains tied up in probate court in Connecticut, where his mother's three sisters are seeking to bar Carman from receiving any money from his grandfather’s estate.

Seven of the eight counts in the indictment are charges related to what prosecutors allege were fraudulent efforts to get money from his grandfather’s estate or insurance companies. The other count accuses Carman of killing his mother.

Vermont U.S. Attorney Nikolas Kerest, through a spokesperson, declined to comment on the case.

“His state of mind is strong, and he knows he has a good team of defence lawyers working for him,” Desautels said.

Some law enforcement officials who were involved in the investigation said the indictment could be the result of new evidence that is not being disclosed. Or, perhaps, federal prosecutors in Vermont were more aggressive in assembling all the evidence collected by a variety of local, state and federal agencies and presenting it to a grand jury.

“One of the issues is jurisdiction, especially when you cross state lines, and who has the ability to bring all that together under one roof," said Donald Melanson, police chief in Windsor, Connecticut, where Chakalos was killed. “And I think that’s why, rightfully so, the U.S. attorney’s office took that and took responsibility for that and brought everything together.”

“When you look at the overall picture ... it brings, to me, a very clear picture of how everything tied together to achieve his (Carman's) goals," he said.

In 2014, before Melanson joined the department, Windsor police drafted an arrest warrant charging Carman with murder in his grandfather's death, but a state prosecutor declined to sign it and requested more information, according to a search warrant for Linda Carman's home in Middletown, Connecticut, obtained by police after she disappeared at sea. Neither state nor federal prosecutors in Connecticut or Rhode Island ever brought any charges against Carman.

The case went cold. Then came the ill-fated fishing trip, which roused investigators' suspicions about Carman. But the probe into Linda Carman's disappearance also failed to produce an arrest.

In 2017, investigators began keeping tabs on a lawsuit filed in federal court in Providence, Rhode Island, where insurers and Carman were suing each other over his rejected $85,000 claim for the loss of his boat, named the “Chicken Pox.” The insurance case tied all the evidence together and may have spurred a new effort to charge Carman, current and former investigators said.

The insurers' lawyers laid out a case accusing Carman of plotting both killings and covering them up, using police investigation findings and information they obtained themselves, including:

— A month before Chakalos’ shooting, Carman bought a rifle that can fire the same bullets as the ones used in the shooting. Carman invoked his Fifth Amendment right against self-incrimination during a deposition when asked about the rifle, which was never found.

— Carman destroyed his laptop computer's hard drive and a GPS device in his truck after his grandfather was killed. He again took the Fifth when asked why.

— Before the 2016 fishing trip, Carman had altered the boat in ways that contributed to its sinking, the judge in the Rhode Island case found in rejecting Carman's insurance claim. Witnesses testified he removed two stabilizing trim tabs from the stern, near the vessel’s waterline, leaving holes that he tried to seal with an epoxy stick.

— An expert on tidal patterns testified the life raft could not have floated toward Martha’s Vineyard from the spot Carman claimed the boat sank, but in fact would have drifted in the opposite direction. Carman’s attorneys said that it was the first time he had used sea charts and that he was confused about the boat’s location.

After his grandfather was killed, Carman inherited about $550,000.

By late summer 2016, prosecutors said Carman, who had moved from Connecticut to Vermont, was unemployed and low on funds after quickly burning through most of that money, much of which he spent on his new home.

It was then that he set up the fishing trip with his mother with plans to kill her, authorities said. The relationship between mother and son was strained, but fishing was one of the ways they were still able to connect.

Carman remains detained while his case is pending.

Federal prosecutors argued in court documents that he should remain locked up while awaiting trial because he poses a flight risk and is a danger to the community.

Prosecutors cited the violence and planning involved in the two killings and his apparent lack of ties to his community — a factor in bail arguments. They said he has little personal interaction with other people, having alienated his family because of his conduct.

They also said he discontinued the mental health treatment he had received from early childhood until he was 17. They wrote that Carman was diagnosed with potential mood and psychotic disorders in 2011, and that he had a history of hostility and aggression.

Carman and his relatives also have said he has Asperger's syndrome, a form of autism that can be characterized by social awkwardness and repetitive behaviour but is not associated with an increased likelihood of violence.

Carman has said he is misunderstood and an easy target for police because he has Asperger's.

Police in Saanich, B.C., say they continue to investigate the possibility that a "third suspect" was involved in a fatal shooting at a bank that left two suspects dead and six officers injured Tuesday.