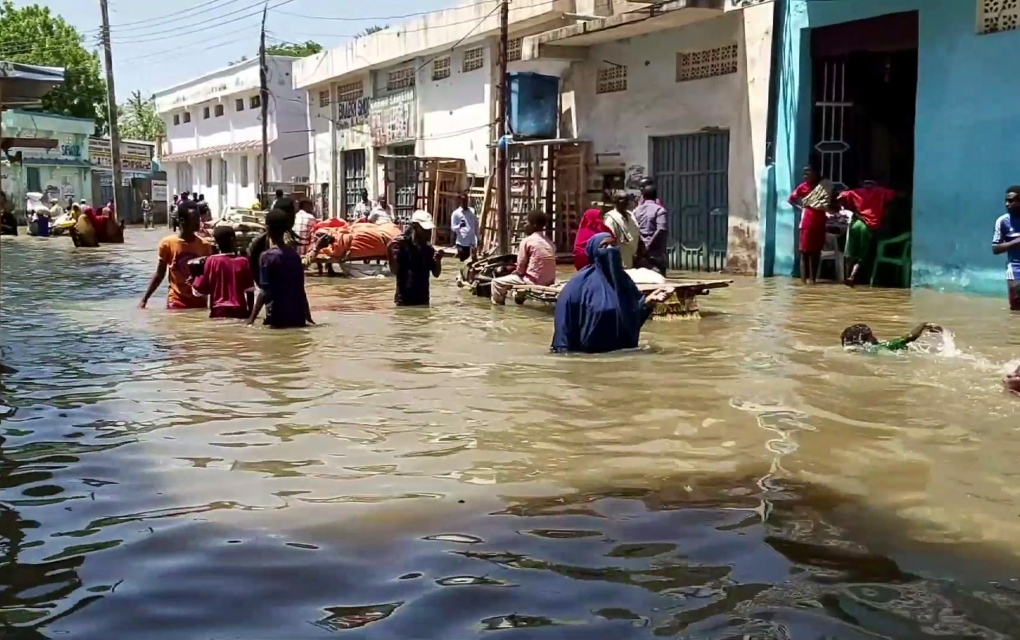 In this image made from video taken Sunday, May 17, 2020, people wade through a flooded street in Beledweyne, central Somalia. Flooding in central Somalia has affected nearly 1 million people, displacing about 400,000, the United Nations said Monday, May 18, 2020 warning of possible disease outbreaks because of crowding where the displaced are seeking temporary shelter. (AP Photo)

At least 24 people have died in the flash floods that hit Beledweyne and Jowhar, two agricultural centres in Somalia's central area, according to United Nations Office for the Coordination of Humanitarian Affairs. The area is still recovering from floods last year that displaced more than 500,000 people,

Belet Weyne in Hiraan region is the most affected district after the Shabelle River burst its banks on May 12, inundating 85% of Belet Weyne town and 25 villages by the river, the UN said. The risk of disease outbreaks is high in the city of Beledweyne as heavy rains continue to pound Somalia and the highlands of neighbouring Ethiopia.

Residents in Beledweyne, a city of more than 400,000, said they are wading through flooded streets to escape waters that are still rising from the Shabelle River. They said they are worried about further flooding in the city, the epicenter of last year's devastating flood, the worst in the recent history.

"The flooding here has affected the entire city. ... People are very worried about their safety," said Hassan Elmi, a resident of Beledweyne. "The government forces are helping some people, but those who are too weak or old are need more help because they cannot wade through these flooded streets because the water is moving too fast."

The flooding also threatens to cut off the main road connecting Beledweyne to the airport which could disrupt deliveries of emergency humanitarian supplies to the town, according to the UN.

Nearly 40% of the people in Jowhar, a smaller centre of about 20,000 residents, have been displaced from their homes, according to the Somali government's Ministry of Humanitarian Affairs and Disaster Management in Hirshabelle state.