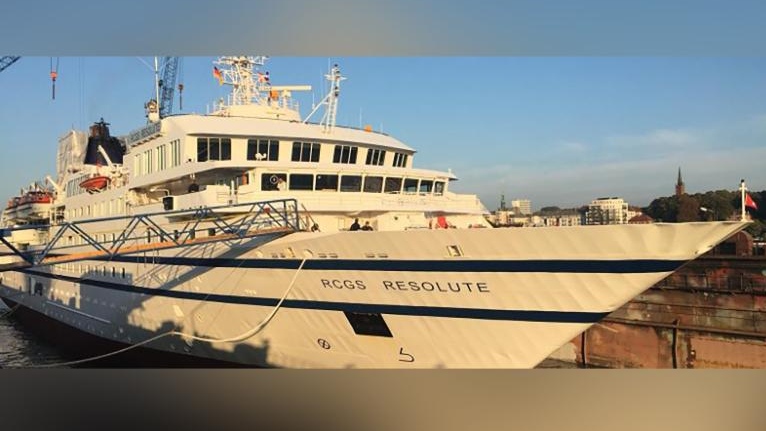 An undated file photo of the RCGS Resolute. (CNN)

A Venezuelan naval boat picked and lost a fight with a passenger cruise liner off the country's northern coast this week, ramming it several times before accidentally taking on water and sinking.

The proprietors of the German-owned RCGS Resolute cruise ship said its vessel had been receiving maintenance in international waters on Tuesday morning when the armed navy boat approached it and ordered it to change direction.

The encounter escalated when, according to the company, "gun shots were fired and, shortly thereafter, the navy vessel approached the starboard side at speed with an angle of 135 degrees and purposely collided with the RCGS Resolute."

However, the RCGS Resolute is reinforced with steel plating to help it navigate through ice.

"While the RCGS Resolute sustained minor damages, not affecting vessel's seaworthiness, it occurs that the navy vessel suffered severe damages while making contact with the ice-strengthened bulbous bow of the ice-class expedition cruise vessel RCGS Resolute and started to take water," the company's statement said.

A total of 32 crew members were aboard the liner, but no passengers were.

Venezuela's navy has acknowledged the incident, though it differs in its version of events.

According to Venezuela, the incident occurred in the early hours of Tuesday in Venezuelan waters, next to Isla La Tortuga. Columbia CS says it took place in International waters, near Willemsted, Curacao.

The country's defense ministry suggested the Resolute may have been carrying mercenaries ready to attack Venezuela. The nation's embattled President, Nicolas Maduro, has often accused the US government and its allies of attempting to overthrow him since much of the international community backed Juan Guaido's challenge to his presidency.

A search and rescue mission successfully retrieved the crew from the sinking patrol boat, the Venezuelan navy said in a statement.