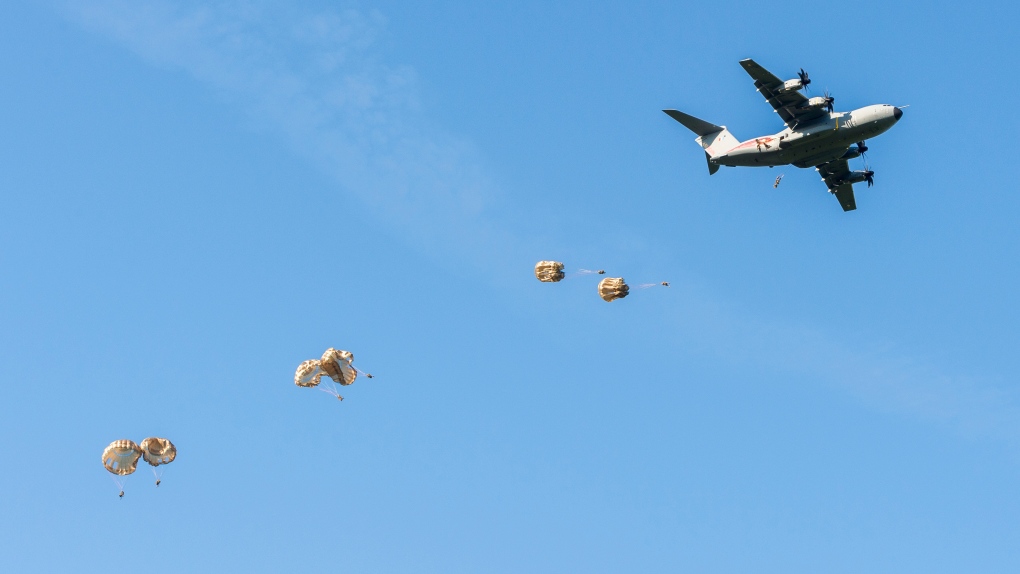 This photo provided by the French Army, soldiers taking part of the projection operation towards Estonia named Operation Thunder Lynx jump over Estonina territory as part of NATO missions in Estonia, early Wednesday June 22, 2022. About a hundred paratroopers from the French 11th Airborne Brigade were deployed above the Estonian territory. (French Army via AP)
BRUSSELS -

NATO secretary-general Jens Stoltenberg said Monday that the military alliance will increase the size of its rapid reaction forces nearly eightfold to 300,000 troops as part of its response to an "era of strategic competition."

The NATO response force currently has about 40,000 soldiers which can deploy quickly when needed.

Coupled with other measures including the deployment of forces to defend specific allies, Stoltenberg said the move is part of the "biggest overhaul of collective defence and deterrence since the Cold War."

Stoltenberg made the remarks at a press conference ahead of a NATO summit later this week in Madrid when the 30 allies are expected to also agree on further support to Ukraine in its war against Russia.

Stoltenberg said he expects allies to make clear they consider Russia "as the most significant and direct threat to our security."

In NATO's new strategic concept, the alliance is also expected to address for the first time the security challenges posed by China, Stoltenberg said. In Madrid, allies will discuss how to respond to the growing influence of Russia and China in their "southern neighbourhood," he added.

Stoltenberg said allies will agree to deliver further military support to Ukraine when they convene in Spain, with NATO members set to adopt a "strengthened comprehensive assistance package," including deliveries of secure communication and anti-drone systems.

Another central theme at the NATO summit will be the possibility for Finland and Sweden to join the alliance following Russia's invasion of Ukraine.

NATO member Turkey has so far blocked the applications, citing what it considers to be the two countries' soft approach to organizations Turkey considers to be terrorist, such as the Kurdistan Workers' Party, or PKK.

Turkey is demanding that Sweden and Finland grant extradition requests for individuals who are wanted by Turkish authorities. Ankara claims the countries are harbouring PKK members as well people it says are linked to a failed 2016 coup.

Turkey also wants assurances that arms restrictions imposed by the two countries over Turkey's 2019 military incursion into northern Syria will be removed.

"We have worked hard since Finland and Sweden applied for membership to ensure that they can join the alliance as soon as possible," Stoltenberg said. "I will not make any promises, but I can assure you that we are working actively to ensure progress because the application of Finland and Sweden to join NATO, they are historic."

Jan M. Olsen in Copenhagen contributed to this report.

Much of the B.C.’s South Coast is under a heat warning with temperatures expected to soar.

TikToker puts restaurants, bars to the test over wheelchair accessibility

A Toronto-based disability advocate is using the power of TikTok to raise awareness over the lack of wheelchair accessibility at many restaurants and bars.