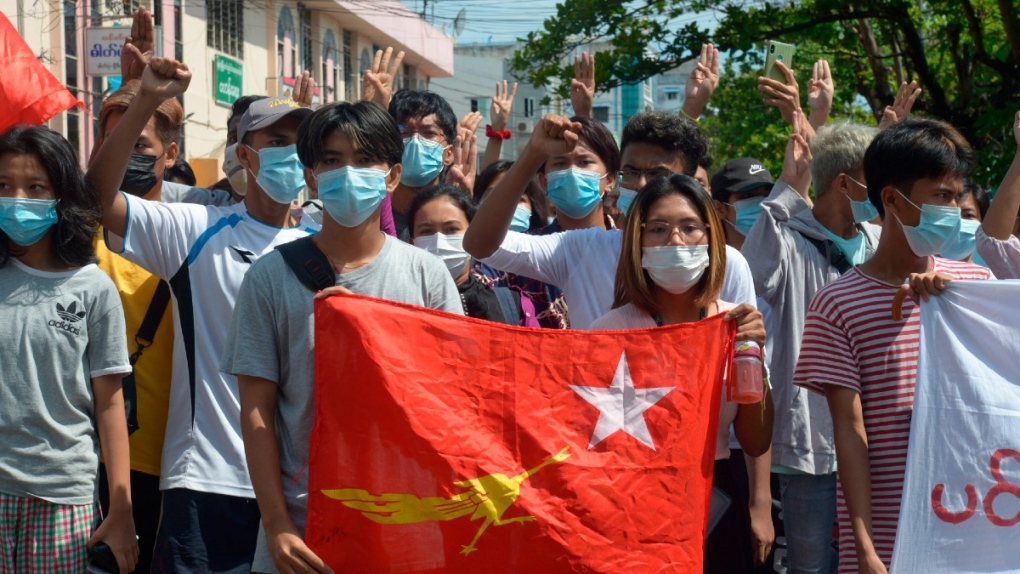 Anti-coup protesters hold the flag of the National League for Democracy party of ousted Myanmar leader Aung San Suu Kyi, while others flash the three-fingered salute during a 'flash mob' rally in Bahan township in Yangon, Myanmar, on May 9, 2021. (AP)

Myanmar poet Khet Thi, whose works declare resistance to the ruling junta, died in detention and his body was returned with the organs removed, his family said on Sunday.

A spokesman for the junta did not answer calls to request comment on the death of Khet Thi, who had penned the line "They shoot in the head, but they don't know the revolution is in the heart." His Facebook page said he was 45.

Khet Thi's wife said both of them were taken for interrogation on Saturday by armed soldiers and police in the central town of Shwebo, in the Sagaing region - a centre of resistance to the coup in which elected leader Aung San Suu Kyi was ousted.

"I was interrogated. So was he. They said he was at the interrogation centre. But he didn't come back, only his body," his wife Chaw Su told BBC Burmese language news in tears from Monywa, around 100 km away by road.

"They called me in the morning and told me to meet him at the hospital in Monywa. I thought it was just for a broken arm or something ... But when I arrived here, he was at the morgue and his internal organs were taken out," she said.

She had been told at the hospital he had a heart problem, but had not bothered to read the death certificate because she was sure it would not be true, Chaw Su said. Reuters was unable to reach the hospital for comment.

Chaw Su said the army had planned to bury him but that she pleaded with them for the body. She did not say how she knew her husband's organs had been removed.

"He died at the hospital after being tortured in the interrogation centre," the Assistance Association for Political Prisoners activist group said in a bulletin that put the toll of civilians killed since the coup at 780.

The group, which monitors details of killings, did not identify the source of its information.

Khet Thi was at least the third poet to die during protests since the Feb. 1 coup.

Khet Thi had been a friend of K Za Win, 39, a poet who was shot dead during a protest in Monywa in early March.

Cultural figures and celebrities have been prominent supporters of opposition to the coup with protests daily in different parts of the Southeast Asian country in spite of the killings and thousands of arrests.

Khet Thi had been an engineer before quitting his job in 2012 to focus on his poetry and to support himself by making and selling ice cream and cakes.

More recently, he wrote that he was a guitar player, a cake baker and a poet - not someone who could fire a gun. But he implied his attitude was changing.

"My people are being shot and I can only throw back poems," he wrote. "But when you are sure your voice is not enough, then you need to choose a gun carefully. I will shoot."