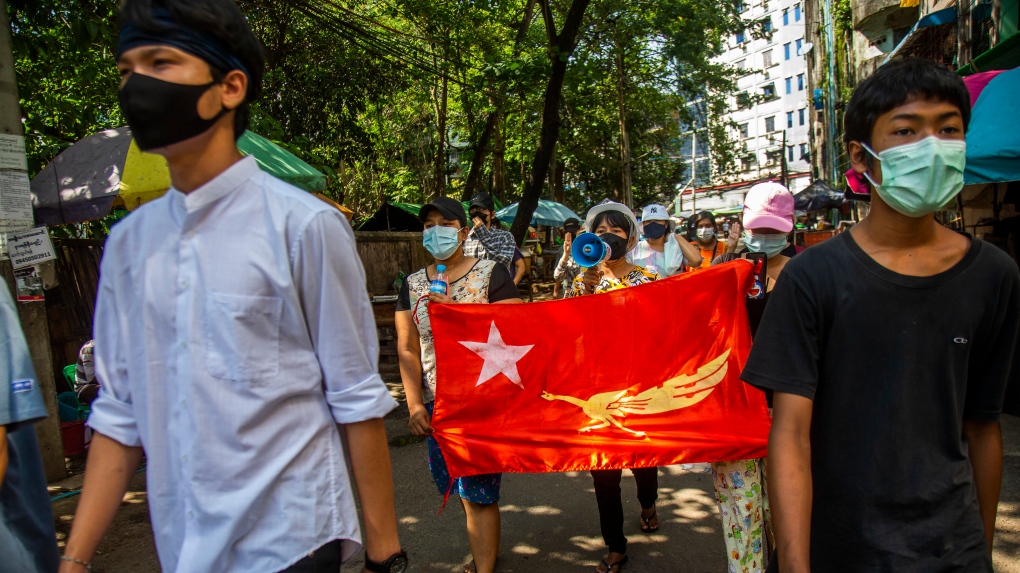 Protesters chant slogans and march in the street of Myaynigone township during the anti-coup demonstration in Yangon, Myanmar, Friday, April 9, 2021. (AP Photo)

YANGON, MYANMAR -- Security forces in Myanmar cracked down heavily again on anti-coup protesters Friday even as the military downplayed reports of state violence.

Reports on online news outlets and social media said at least four people were killed in Bago, about 100 kilometres (60 miles) northeast of Yangon, in an attack by government troops and police that began before dawn and continued sporadically until after dark.

The Bago Weekly Journal Online said a source at the city's main hospital, whom it didn't name, believed about 10 people had been killed.

It was the third attack this week involving the massive use of deadly force by security forces to try to crush active opposition to the Feb. 1 coup that ousted the elected government of Aung San Suu Kyi.

On Wednesday, attacks were launched on opponents of military rule in the towns of Kalay and Taze in the country's north. In both places, at least 11 people -- possibly including some bystanders -- were reported killed. Security forces were accused of using heavy weapons in their attacks, including rocket-propelled grenades and mortars. The allegations could not be independently confirmed by The Associated Press.

Some of the protesters used homemade weapons, especially in Kalay, where defenders called themselves a "civil army," and some were equipped with rudimentary hunting rifles.

Most protests in cities and town around the country have been nonviolent, with demonstrators espousing civil disobedience.

Violence by security forces was also reported Friday in several other areas, including Loikaw, the capital of Kayah sate in the east, where live ammunition was employed, according to numerous social media posts.

At least 614 protesters and bystanders have been killed by security forces through Thursday, according to the Assistance Association for Political Prisoners, which monitors casualties and arrests.

At a news conference in the capital, Naypyitaw, a spokesman for the ruling junta defended the actions of the security forces.

Brig. Gen. Zaw Min Tun, when asked about reports that automatic weapons have been fired at protesters, replied that if that were the case, 500 people would have been killed in just a few hours.

He challenged the death toll issued by the Assistance Association for Political Prisoners and said the government's tally was 248. He also said 16 policemen had been killed.

Asked about air strikes carried out by government jets on territory held by guerrillas from the Karen ethnic minority in eastern Myanmar, which reportedly killed at least 14 civilians, Zaw Min Tun said the aerial raids allowed more exact targeting than ground attacks which would have caused more deaths. Supporters of the Karen charge that the army is carrying out a ground offensive as well, including the use of artillery.