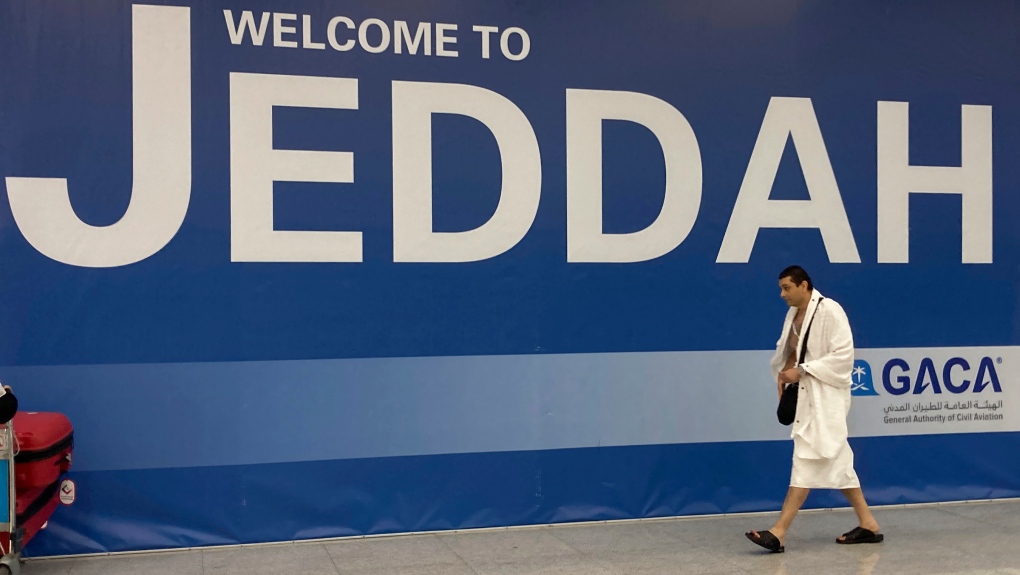 A Muslim pilgrim walks in front of a welcoming banner upon his arrival at the King Abdulaziz International Airport in Jeddah, Saudi Arabia, Friday, July 1, 2022. The pilgrimage to Mecca is required once in a lifetime of every Muslim who can afford it and is physically able to make it. (AP Photo/Amr Nabil)

Thousands of pilgrims started arriving in the holy city of Mecca in Saudi Arabia on Friday, among some one million Muslims expected to attend the 2022 hajj pilgrimage season after two years of major disruption caused by the COVID pandemic.

Wrapped in white robes, with some carrying umbrellas against the burning desert sun, hundreds performed the first ritual of the hajj, which involves walking in a circle around the Kaaba, the sacred building at the center of Mecca's Grand Mosque.

"Praise be God... It's impossible to describe my feelings right now," said Ahmed Sayed Mahmoud, an Egyptian pilgrim. "Being in the Grand Mosque and in the land of the two holy mosques makes me very happy."

Saudi Arabia, home to Islam's holiest sites in Mecca and Medina, allowed back foreign travelers this year to perform the hajj. Only a few thousand Saudi citizens and residents attended the annual pilgrimage in the last two years as COVID-19 wreaked havoc across the global economy and curtailed travel.

However authorities have said only one million people can join the 2022 season, less than half of pre-pandemic levels, and access is restricted to pilgrims aged 18 to 65 who have been fully vaccinated or immunized against the virus and do not suffer from chronic diseases.

Security officers mixed with pilgrims inside the mosque. A web of surveillance cameras oversaw its surroundings and checkpoints controlled access to the city to help ensure an incident-free hajj, which has been marred in the past by deadly stampedes, fires and riots.

Over the years, the kingdom has spent billions of dollars on making one of the world's biggest religious gatherings more secure. hajj, a once-in-a-lifetime duty for every able-bodied Muslim who can afford it, is a major source of income for the government from worshippers’ lodging, transport, fees and gifts.

In 2019, the last year before the pandemic struck, some 2.6 million people performed the hajj, while around 19 million took part in the umrah, another form of pilgrimage to Mecca which - unlike the hajj - can be carried out at any time of the year.

An economic reform plan of Crown Prince Mohammed bin Salman aims to increase umrah and hajj capacity to 30 million pilgrims annually and to generate 50 billion riyals (US$13.32 billion) of revenues by 2030.