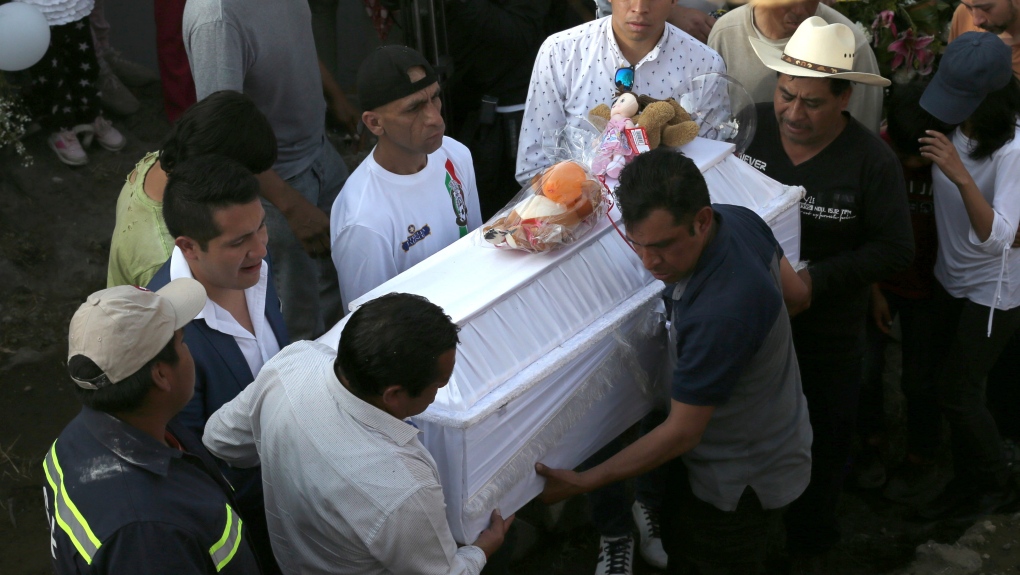 MEXICO CITY -- A 7-year-old Mexico City girl whose brutal murder has generated national outrage was buried Tuesday as capital officials pledged to tighten rules for children leaving government schools on their own.

Fatima, who was seen on video leaving her school on Feb. 11 with a woman who was not her mother and found days later dead and wrapped in a plastic bag, was laid to rest in front of grieving relatives and neighbours on Mexico City's south side.

Late Tuesday, Mexico City police said via Twitter that they had identified the woman who walked off with the girl and searched a home where some of the girl's things were found.

The girl's funeral procession paused outside the door of the school where she was abducted. It was plastered with hand-lettered signs demanding justice -- "not one more, enough already "-- and one urging parents to pick their kids up punctually at 12:30 "to prevent incidents."

There was a minute of silence, then the crowd chanted her name. One of the pallbearers cried out: "Soon it could be one of your children! Wake up people!"

Mourners called for the school director to come out, but a teacher emerged to say the director was unavailable and the procession continued.

In Mexico City, even grade-school students often simply walk out of school after classes to meet parents waiting on the sidewalks, but there have been few controls to ensure someone is there to meet them.

That is apparently what happened to Fatima who walked away with a woman. Mexico City prosecutor Ernestina Godoy said the girl "recognized her, and so they let her go with her."

Her body was found abandoned in a rural area on Saturday. By law, prosecutors don't give the full name of victims.

Humberto Fernandez, the head of the city's school system, said there is already a little-used rule requiring parents or designated person to show up within 20 minutes after classes, or their kids will be taken to a prosecutors' office.

Fernandez said that rule was "very rarely"enforced because children were accepted at only one downtown prosecutors' office in the city of 9 million. Fernandez said all prosecutors'offices in the city's 16 boroughs will receive children, and police patrol cars will be obliged to help school officials take them there.

Mexico City Mayor Claudia Sheinbaum said authorities would now issue amber alerts and start searching for children as soon as they are reported missing by a relative or teacher. Authorities lost a full day in the search for Fatima because they waited for a formal missing-person case file to be opened.

Family and neighbours packed a street in the southern borough of Tlahuac on Tuesday for a Mass underneath a massive yellow tarp strung from roof to roof.

The priest leading the service read a message from Bishop Andres Vargas Pena that acknowledged the indignation felt and urged them to not grow accustomed to the daily atmosphere of crime.

Marisol Mercado Angeles, a 33-year-old homemaker, held an umbrella to shield her face from the beating sun.

"We're without words," said the mother whose son attends the same school. "It's something as difficult as it is painful."

"There's no security at the school," Mercado said. "I think it is responsible, the school."

The lower house of Mexico's Congress held a moment of silence Tuesday for Fatima, whose case has sparked outrage.

The cause of death has not been released. Five people have been questioned in the case, and video footage of her abduction has been shown on television.

Guillermo Anton Godinez, the girl's 65-year-old grandfather, said Monday that his daughter, the girl's mother, arrived at the school 15 or 20 minutes after the woman led the girl away.

On Tuesday, he said the school was negligent and that he knew of cases last year where police were called to pick up kids whose parents were late.

"The cheapness of not spending 5 pesos to call a police car," he said. "Tomorrow who is it going to be?" He said police should be present at the school for drop off and pick up.

He said he didn't recognize the sketch authorities released of the woman who led the girl away from the school and he was sure she wasn't from this tightly knit neighbourhood of low cinder block homes.

"We know each other here," he said.

Prosecutors' spokesman Ulises Lara offered a $100,000 reward for information on the person who picked her up when she left school.

The abduction and killing of the child came just days after Ingrid Escamilla, a young Mexico City resident, was allegedly murdered by a boyfriend.

The man, who has been arrested and purportedly confessed to killing Escamilla with a knife, mutilated her body and flushed part of her corpse into the sewer.

The Mexican capital has seen a series of angry demonstrations over killings of women over the past few months, including several in which protesters have vandalized major monuments and buildings.

The killings have proved a politically difficult issue for President Andres Manuel Lopez Obrador, who who has sometimes complained that protests over the killings were an attempt to distract attention from his social programs.